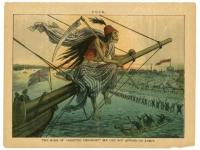 Our programs here at the Historical Society allow students to work directly with primary source documents, and some of the most interesting feedback received has been through documenting students understanding of political cartoons. As a part of the HINT project here at HSP, we polled over 200 students on what they thought of political cartoons and to learn if they were a good teaching tool. The feedback we received was wonderful as many students enjoyed studying the cartoons as a part of their history lesson. It allowed students to see multiple perspectives of various historic topics -- an important aspect of the Common Core standards.

One issue, however, was when students were asked if the cartoon would be useful in a classroom or not. We found if student did not agree with the opinion of a particular cartoon, they would label it as bias, racist, or unhelpful, whereas, if they agreed with the cartoon, it was engaging, powerful, and a great teaching tool.

To further illustrate this, I was recently talking to a student about what sources she used in her National History Day project. She responded that some of the opinions she found written about her topic, Walt Disney, were negative, so she chose to ignore those sources because they were ‘biased.’ Even with the plethora of opinions that students see on a daily basis, students had a hard time understanding that all history, not just the history they do not agree with, comes with a bias, and it does not make the source unhelpful or unimportant if they do not agree with it.