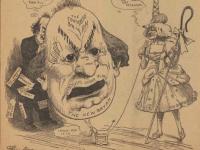 While Halloween is known as the holiday where we can shamelessly stuff our faces with candy, it actually has some historic roots. The holiday did not become widespread until later in the 19th century, and it was mostly due to Irish and Scottish immigrants. In order to celebrate the holiday with some historic flair, I wanted to include a political cartoon from 1908 that specifically refers to “Hallowe’en.” In this cartoon William Jennings Bryan is accused on wearing a mask so voters cannot see his true political leanings. This idea of politicians masking their behavior is something we can still see in cartoons today, over a hundred years later. Check out the images below and follow the mini lesson with your class.

First, in the image below, we see President Obama as Pinocchio.

Remember to ask students to source the image first by writing down the following:

Next, have students write down what they think is the consistent theme throughout the three cartoons. All three blatantly illustrate politicians changing their minds or being deceptive, similar to wearing a Halloween costume. For more political cartoons remember to check out our latest digital history project, Politics in Graphic Detail.