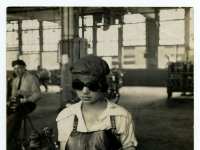 -The Battle at Gettysburg was one of the bloodiest confrontations of the Civil War, ending with nearly 50,000 casualties from both sides.

-HSP holds several maps of the battle lines and regiment configurations in its collection.

-Diaries from common citizens, like the farmer Jacob Stouffer, give the modern reader a personal view of the battle and life during the war.

-Possible topics on Gettysburg can include the military tactics of the battle, the effect of the confrontation on local populations, or personal accounts of those involved.

-During the First World War, with many men serving in the Armed Forces, women soon replaced them in industrial jobs and other types of labor.

-Organizations such as the Council of National Defense Women's Committee and the National League for Women's Service organized support on the home front by selling Liberty bonds, collecting food and other resources, and sending relief aid abroad.

-Through their work during the war, many women were able to learn new skills and experience new occupations in the workforce.

-Many women joined the Armed Forces as well both fighting in the war and providing aid as nurses.

-War took many soldiers away from home, and  they took to writing letters throughout their time in service to stay connected to family and friends back home.

-These correspondences provide a personal perspective on war, from the point of view of the soldier fighting, rather than a general or politician.

-Through letters from different wars in American history, researchers can find new information on battles and other events, as well as learn more about the places and people the author encountered.

-Topics can concentrate on war letters as a whole, or letters from one war (Civil War, WWI, WWII, Vietnam)