Notes from the Bank Vault

Notes from the Bank Vault 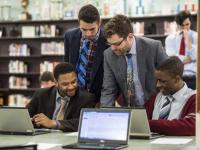 I had the pleasure of working at the Historical Society of Pennsylvania for six weeks this summer as the Wells Fargo Teacher Fellow.  My assignment was to develop primary-source based lesson plans on the Bank of North America collection – consisting of over 650 volumes of material evidence from the first American bank.  The BNA was a corporation that lasted basically intact from the 1780’s until the 1920’s.  From then until now, its charter was handed down from bank entity to bank entity, and now that same charter is currently held by Wells Fargo, a partner in this educational feast.

At first, I was a little overwhelmed by what I saw.  As an educator, I am used to looking at specific concepts and time periods, and then building a lesson plan to fit those requirements.  In my academic work, I am accustomed to narrowing down a specific topic and then exploring all the potential sources based off of that specific thesis.  But this assignment involved doing neither.  The Historical Society was looking for something much more challenging - to provide universally useful lesson plans in history, government, personal finance, and economics by looking at one specific collection that spanned 140 years of American history.  The spending accounts of the founding fathers, the personal bank book of a nineteenth century UPenn ethnographer, bank meeting minutes, a letter from Stephen Girard demanding his money, old currency, a book of signatures from 1785, a check that Thomas Jefferson wrote to himself, blotter paper, volumes after volumes of double entry bookkeeping, a letter from Thomas Paine to the bank’s president, collected stock certificates, accounts of dividends issued every quarter and every year: It is a truly overwhelming collection that circles around the others laocoönically in the Society’s second-floor vault.

Working on a grant is not a good time to get writer’s block, and I sat in that windowless vault for two weeks, filling a paper notepad with scribbles that increasingly resembled those of the bank clerks: Coded, frantic, and increasingly obfuscated by time.  Within two weeks, I knew what I wanted to have copied and had at least ten lesson plans in mind.  Before I left to run a youth camp with St. Joseph’s Prep students on the Navajo Reservation, I loaded a cart full with sources and deposited them with the Society’s skilled digital services department.

When I returned East, I only had four weeks to write all the plans and put them online.  I tried to think like a teacher and determine what would be most useful in a classroom – in what ways could these lessons make an otherwise difficult occupation just a little bit easier.  One of the great challenges of teaching concerns the amount of time spent on the preparation and assessment.  While it is true that teachers work in the classroom, i.e., so much of our craft has to do with interpersonal relationships and the concern for each individual student and his/her needs, Woodrow Wilson said “it is not far from the truth to say that Congress in session is Congress on public exhibition, whilst Congress in its committee-rooms is Congress at work.”  Something similar could be said concerning teachers.  Teachers in the classroom are on public exhibition, perhaps performing.  Teachers back in their homes and at their desks, chomping on their pencils and pulling at their hair, are teachers at work.

So, I got to work myself and finished up ten lesson plans: One on the development of banking, two on banking and warfare (the Revolution and the Civil War respectively), two on the relationship between money and American politics, one on the economic impact of the Yellow Fever epidemic, and four specifically on basic economic/personal finance concepts (currency, opportunity cost, salaries, and security respectively).  I am disappointed with that listing. It is was rather curt way of describing a complicated set of lessons, especially when considering that these plans were written so as to be interdisciplinary, to have the greatest utility for teachers in all sorts of diverse settings, and to appeal to the most educators but the highest common denominator.  But part of the challenge of education involves the need to use time wisely, and you can read these lessons for yourself.

This experience got me thinking about history in general and my small place in it.  History is an important subject for many different reasons.  Being a confirmed history nerd myself, it always disappoints me that many people compartmentalize ‘history’ to the classroom and see very little use for it in their own lives.  Especially in Philadelphia, I see a true paradox: A place where history is so important – so omnipotent – but most people seldom bow to it, and so omnipresent but many are blind to it.  Although some think that this is because history was not taught well in schools, I think that it is actually because the power and beauty of history makes people uncomfortable.  Embracing history in one’s own life is uncomfortable in the same way that a teenage boy feels awkward while talking to a supermodel.

The comparative advantage that history has with other subjects is its access to wisdom, its omniscience towards people and their decisions.  History tells us how people live.  We can wonder why they made certain decisions: Why they choose life or death, peace or war, wealth or poverty, and Kierkegaard’s either/or.  History helps us envision what the great Philosopher Ludwig Wittgenstein wanted – to see things for how they really are, not as the product of someone else’s system, or theory, or language (that is, if we can separate those things from truth at all).

Even this collection of banking papers – much of which consists of ledgers and documents that many would consider banal – are soaked with humanity.  I thought that HSP’s own Charissa Schulze put that best when she noted that:

“The books, manuscripts, and documents that are housed here at the Historical Society of Pennsylvania are not merely a recording of human history but are also a residue – a literal trace of hours spent in the lives of ordinary (and extraordinary) people.  It is easy to forget that history is a period of time lived out by others just like us, and it is a fact that can be awe-inspiring to ponder.  The reality of it is made all the more palpable when leafing through these objects that have traveled through time, and now exist as very tangible connections between the past and the present.”

History is a subject that can inspire awe and wonder, and both feelings come from a source of wisdom.  On the other hand, the superlatives – biggest, longest, first – are not really that important to wisdom.  So, although people like to argue about the Bank of North America being the first this, and the biggest that, at the conclusion of this project, I would like to argue that it is the “residue” which Schulze describes as being the most important aspect of this collection and my lesson plans.  The “residue” of clerks cutting their quills and squashing insects out of Philadelphia’s humid past, the scribbles in the margins.  The “residue” of past lives lived – the web of connections at the bank, such as how Bank President Thomas Willing’s daughter Ann married board member William Bingham (and Willing’s granddaughter married the bank’s cashier Tench Francis).  The “residue” of old conflicts and reconciliations: Thomas Paine supported the bank in its crisis.  Henry Drinker (the younger) became a cashier for the bank that Timothy Matlack helped found, even though Matlack had exiled the elder Henry Drinker during the heat of the American Revolution.  The "residue" of the goodness that Thomas Scattergood had, when he embarked South to preach to slaves and against slavery to their masters.  These stories are just the famous ones, but the bank’s documents do represent the story of the human struggle with scarcity – unlimited wants in the face of limited resources – the most precious resource of which is time.

In conclusion, I wanted to express my gratitude for the opportunity to work with everyone at HSP, particularly Alicia Parks and Beth Twiss Houting, who helped very much with my lesson plans.  I also want to thank, by name, Samantha Miller (who digitized the selections that I requested from the collection), Erin Paulson (who met with me early on to discuss some lesson ideas), and Beth Potens and Arthur Murphy who shared an office with me and, as my summer colleagues, helped me stay sane (if I ever was sane to begin with).  I am very grateful to everyone for their help.

Note:  Besides Leo's lesson plans for secondary schools, HSP also has a set of lessons based upon the BNA collection for elementary grades too.