Freedom of the Press? The Suppression of the Christian Observer and the Evening Journal

Home › Education › Unit Plans › Civil Liberties and The Civil War In Pennsylvania 0 › Freedom of the Press? The Suppression of the Christian Observer and the Evening Journal

Freedom of the Press? The Suppression of the Christian Observer and the Evening Journal 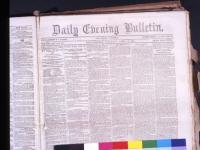 Like his modern counterparts, Abraham Lincoln’s political success depended greatly on his relationship with the press. While the term “mass media” today encompasses a variety of traditional and electronic formats, Lincoln dealt with only one: newspapers. Maintaining a positive relationship, however, was not simple. Not only were there a greater number of newspapers in the North than exist today, many of these newspapers gave little pretense to “objective” journalism. During the 19th century, many newspapers were party organs, with their editor often striving for political office or seeking to play the role of “kingmaker” in party politics.

Philadelphia’s seven major daily newspapers were no different. The Evening Journal was the lone Democratic organ in sea of Republican-influenced newspapers. The Inquirer, which carried the largest circulation in the city at 60,000, was published by Jesper Harding, whose son George, a lawyer, knew both Lincoln and Secretary of War Edwin Stanton during the 1850s. When Harding was appointed collector of Internal Revenue in Philadelphia by Lincoln, his other son, William, took over the paper, which was clear in its support for the Lincoln administration.

Another major Philadelphia newspaper, the Bulletin, was an anti-slavery paper with close ties to Simon Cameron, Lincoln’s first Secretary of War. In fact, as the federal government shut down many newspapers for their editorial content, the Inquirer and the Bulletin openly supported these actions.

The partisan nature of these newspapers created a unique challenge for Lincoln at the outset of the War. Many of the Democratic editors were openly hostile towards the Lincoln administration and the conduct of the war and created a clearly adversarial editorial tone that some supporters of the president felt bordered on treason. While Lincoln supported the constitutional rights of a free press, he also recognized that such opposition from the newspapers was damaging to the war effort.

In a controversial series of steps, many opposition newspapers, including two in Philadelphia, were ordered suppressed by the federal government for providing “aid and comfort” to the enemy. The “aid and comfort” found in many offending newspapers often did not take the form of government secrets or military intelligence. Instead, the editorial opinions expressed by these newspapers were enough to draw the attention and ire of the federal government. The cases of the Christian Observer and the Evening Journal vividly illustrate the often fine line between constitutional freedoms provided to the press and security concerns.

1. Have students identify the types of mass media found in our political system. Teachers may also have students examine current newspapers and periodicals to analyze the differences between news articles and editorials.

3. Utilize the excerpts of editorials from the Evening Bulletin to illustrate the political attitudes of Philadelphia newspapers that were supportive of the Lincoln Administration.

4. Examine the excerpts of the Christian Observer and Evening Journal and have students determine if the editorial content of those newspapers simply expressed opposition to President Lincoln or instead provided “aid and comfort” to the Confederacy.

5. Discuss the following with students

Civil Liberties: the freedom of a citizen to exercise customary rights, as of speech or assembly, without unwarranted or arbitrary interference by the government.

Writ: a formal order under seal, issued in the name of a sovereign, government, court, or other competent authority, enjoining the officer or other person to whom it is issued or addressed to do or refrain from some specified act.

Tribunal: A court of justice

Conscription:  a compulsory contribution of money to a government during a time of war.

Despot: a king or other ruler with absolute, unlimited power; autocrat, tyrant, or oppressor.

1972 War Powers Resolution: US federal law intended to check the power of the President in committing the United States to an armed conflict without the consent of Congress.

Unit Plan:
Civil Liberties and the Civil War in Pennsylvania

Freedom of the Press? The Suppression of the Christian Observer and the Evening Journal
Copperheads or Confederates? Political Opposition in Civil War Pennsylvania
Trespass, Assault and Battery, and False Imprisonment: The Cases of Pierce Butler and Charles Ingersoll
Habeas Corpus: A Constitutional Battleground

This lesson was created by Michael Karpyn. Updated for SAS by Casey B. Wernick and Alexandra Rospond, Education Interns, Historical Society of Pennsylvania.