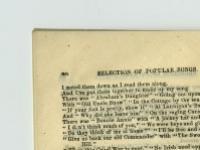 Students explore the issues of Irish immigration and assimilation into American culture through the analysis of 19th century ballads.  These songs exemplify major themes of Irish immigration from forced evictions and famine in Ireland to the challenges of finding work and facing discrimination in America. Students are asked to reflect on songs as a means of documenting history and as an expression of group sentiment and opinion.

“What Irish Boys Can Do”
Song: “Poor Pat Must Emigrate”

By using the Irish Ballads, students explore the reasons for Irish emigration from Ireland and the impact that immigration had on many aspects of Irish life from discrimination to work.  Students learn about the hardships in Ireland and the challenges the Irish faced in the United States. From these ballads, students also gain an understanding of Irish values and beliefs, as well as a sense of Irish pride. Students build a more holistic profile of the Irish immigrant from the varied topics of these Irish ballads.

Have students think about their favorite songs.  Put some of the titles on the board and ask students to give a one sentence summary of the major theme of the song. (Specify that students should share titles and descriptions that are appropriate in a classroom setting). The teacher may wish to share some additional titles that reflect a group sentiment or reveal the historical context of the song. For example: "God Bless America" post September 11th or John Lennon's "Imagine" in the 1970's.

Focus on questions 5 and 6 from the student worksheet. Discuss the use of the term “emigrant” as opposed to “immigrant.”

Coffin Ship: a term given to the ships that carried Irish immigrants escaping from the potato famine. The name reflects the dangers immigrants faced in the form of disease and poor nutrition

Diaspora: refers to any people or ethnic population who have left or been forced to leave their traditional homeland and are dispersed throughout the world.

Discrimination: unfair treatment of a person or group (either intentional or unintentional) based on race, color, national origin, religion, sex, handicap, or other attribute.

Emigrant: someone who leaves one country to settle in another

Famine: widespread starvation in Ireland was also called the Irish Potato Famine of 1845-49, The Great Famine, or The Great Hunger.  British economic policy towards Ireland and a potato fungus that ravaged the crop resulted in mass starvation.

Immigrant: a person who comes to a country where they are not born in order to settle there.

Migration: the movement of persons from one country or locality to another

Nativism: anti immigrant sentiment or a sociopolitical policy favoring the interests of established inhabitants over those of immigrants. Historically refers to white, native-born, Protestant Americans' hostile and defensive reaction to European immigrants

Paddy: used as a disparaging term for a person, especially a man, of Irish birth or descent.

This project was made possible with generous support from the Pennsylvania Department of Education. Thank you to the authors, organizations, and web authors who graciously granted us the right to reproduce or link to their material. "Broom, Loom, and Schoolroom: Work and Wages in the Lives of Irish Women." by Hasia R. Diner. In Erin's Daughters in America: Irish Immigrant Women in the Nineteenth Century. pp. 84-94. Baltimore, MD: Reproduced with permission of The Johns Hopkins University Press, 1983.

This lesson was created by Kathryn Wilson and Jennifer Coval. Updated for SAS by Clara McGrath, Education Intern, Historical Society of Pennsylvania.