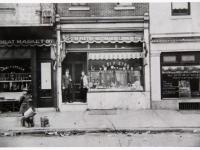 In this lesson, students will read Italian immigrant familly histories as well as interviews with Italian immigrants to better understand the immigrant experience.Students will learn about why Italians immigrated, the development of ethnic communities, the differences between urban and rural life, the development of a uniquely Italian American ethnic identity, and how Italians fit into the larger context of immigration and ethnic history in the state and nation. This activity also introduces students to the practice of oral history and its importance to the historiographic process.

How can the story of another Pennsylvanian, past or present, influence your life?

Print out copies and have students read "Rural Roads, City Streets: Italians in Pennsylvania" and "Italian Immigrant Family Histories." Depending on the abilities of your students, assign them the long or short version of the "Rural Roads" reading.

1. In groups, have students analyze the Italian Immigrant Family Histories. As the students read the family excerpts, they should think about and respond to these three questions:

2.. Have students read excerpts from interviews with Italian immigrants, The interview excerpts are listed under each of the following categories

Depending on the abilities of your students and your time frame, you can choose how you will assign these excerpts. You could divide the class into groups and assign one theme to each group. A shorter exercise would be to have each student choose one excerpt and follow the steps below.

3.  Students read the excerpt(s) and write down key words that indicate important ideas or concepts under the theme they have chosen. Explain why they chose the word and why it is important.

4. Students identify the voice that they hear speaking in the excerpt.

5 Either in class or for homework, students should choose one (or more depending on the length) of the interview excerpts and write a short interpretive essay (250-500 words). In the essay, they should identify the person, what they learned about the person, family, or community, and why and how the information is useful or important to the theme identified. The explanation should be placed within the context of what students have learned about Italian immigration.

Axis Powers: A power block consisting primarily of the countries of Germany, Italy, and Japan who agreed in 1940 to divide the world into three spheres of influence and defend one another against aggression. They fought against the allied powers who were primarily the United Kingdom, what was formerly the Soviet Union, and the United States.

Birds of passage: migrants who move back and forth from one place to another following seasonal work patterns.

Company house: a house that is owned, maintained, and usually rented to residents who work at the company’s factory.

Company town: a town whose population is dependent on the economic support of a single factory or business (such as coal mining) for their economic livelihood and oftentimes for maintaining stores, schools, medical facilities and housing.

Culture: shared, learned human behavior; the way of life of a society.

Demographic: of or relating to demography which the study of the characteristics of populations is such as births, health, deaths, marriages.

Diaspora: refers to any people or ethnic population who have left or been forced to leave their traditional homeland and are dispersed throughout the world.

Emigration: to leave one country or region to settle in another.

Enemy Aliens: in this case, refers primarily to Japanese, Germans, and Italians living in the United States, many of whom were US citizens, who fell under suspicion during World War II. Many thousands were accused of being anti-government conspirators or enemies of the state regardless of whether they were actually guilty of such actions or not. They were often locked in internment camps and/or had their lands and possessions taken and sold by the government without any recourse.

Festa (Feste, plural):  Italian word for festival. Feste were organized around the feast day of the patron saints of the towns of origin of immigrants. The festivities included entertainment such as games of chance, food, and would end with a religious service in church and finally the saint’s statue was paraded in the street accompanied by devotees.

Foodways: Refers to the many ways in which food and the activities surrounding food such as its production, preparation, and consumption become culturally meaningful and expressive.

Immigration: to enter and settle in a country or region to which one is not native.

Little Italy: general name for a neighborhood or area populated now or in the past primarily by Italians.

Mezzogiorno: the word literally means “mid-day” or “noon” and indicates all the political regions in Italy south of Rome including Sicily. This area sometimes includes the region of the Abruzzo because it, like the rest of the area, was part of the Kingdom of Naples before the unification of Italy in 1861.

Migration: movement of persons from one country or locality to another.

Padrone: A labor agent or recruiter who secured jobs for new Italian immigrants especially during the early years of immigration. They sometimes also paid the fare for passage and helped find food and housing. The padrone often charged a fee for these services which was extracted from workers’ wages.

Piece work: a kind of wage labor in which workers are paid by the piece produced instead of for the time worked.

Wedding soup: a soup, popular now in parts of the northeastern United States, that was brought from southern Italy by immigrants. Its ingredients typically include a green vegetable such as spinach or escarole and tiny meatballs in a clear, often chicken based broth. It sometimes contains pasta or lentils. The term wedding may be an English translation of a word that indicated the “marriage” of flavors that occurs.

This lesson was created as part of a series about immigration that was placed on an older HSP website and was not created in the format we presently use. Therefore, please excuse some discrepancies in formatting and lack of fully digitized sources.

This lesson was created by Joan Saverino with the assistance of Jennifer Coval. Updated for SAS by Clara McGrath and Eden Heller, Education Interns, Historical Society of Pennsylvania.