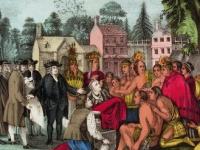 When Swedes and English interacted face-to-face with the Lenni Lenape or Shawnee, they encountered in the fundamental differences, not only of language and culture, but of underlying worldview as well. The differences in worldview between Indians and Europeans informed early negotiations between the groups, which involved moving back and forth between differential understandings of property, language and writing, social customs, and notions of reciprocity. This activity introduces the concept of cultural worldview and allows students to understand how Native and European ideas of time, the spirit world, property and social relations differed from one another.  Students are encouraged to speculate on how these differences informed both accommodation and misunderstanding between the two groups.

How has social disagreement and collaboration been beneficial to Pennsylvania society?
What role does analysis have in historical construction?

Apology of the Paxton Volunteers
Correspondence, Israel Pemberton captive inquiry
The Number of What is Killed and Captivated in Bethel Township, Lancaster County
Grievances of the Back Inhabitants

1. Warm Up: Activate prior knowledge by conducting a warm up exercise in which students react quickly to a series of words related to the colonial encounter of Native Americans and Europeans.

Explain to students that you will be reading a series of words relating to Native Americans and when Europeans first encountered them on North American shores. Ask them on a piece of notebook paper to write down the first word that comes to mind when they hear each of the terms. You will then call out each term and give them only about 10 seconds or enough time to write a quick response. The effectiveness of this exercise is to determine the prior knowledge of the students and turn their minds towards thinking about words associated with the unit.  Words you might use include:

Then review each word and ask students to share their responses, listing them on the board. Afterward, go back and look at what is written down. Assign a plus, minus, or 0 beside each word according to the kind of feeling (positive, negative, or neutral) that is evoked by the term. When the exercise is completed have the class discuss: What kinds of feelings are evoked by specific terms? What patterns they see in responses that were neutral, positive or negative.
Are any of the responses stereotypical? How and why?

Ask students to infer what the implications of these patterns are for communication modes. Observe, for example:

3.  Introduce and discuss the concept of cultural worldview.  Ask the class "Who created the engraving?" Tell students that the engraving is an example of the worldview the Europeans held during the early colonial era. Describe worldview as a kind of "cultural sunglasses" through which we see and experience the world as real. Discuss how worldview is a deep kind of cultural understanding that shapes our reality but usually lies beneath the level of everyday awareness.  Thus worldview seems "natural" even though it is cultural.

Compare and contrast Native and European worldviews in terms of time, relationship to nature, ownership of property, and social interaction.  Using the Worldview worksheet, create a diagram with students that map out these differences. Have students discuss, in pairs or small groups, how the patterns represented in the engraving embody these differences.

4. Process ideas.  Write on the board the two following questions:

What do you think would be the worldview from a Native American perspective?

What do you think a European’s worldview be?

Given differences in worldview, what challenges did Native Americans and Europeans face when interacting with one another?

How might these differences of worldview have led to misunderstandings or conflict even when both parties had good intentions?

Have students pick one these topics and write a short essay answering the posed question. Collect the essays at the end of the class period. This could also be used as a take home activity if desired.

Expansion
To take this lesson a little deeper, have students read The Apology of the Paxton Volunteers in light of the documents about grievances, killings, and capture. Discuss the differences in worldview. There are several examples such as:

Some possible discussion questions are:

Native American: indigenous or original inhabitants of the Americas prior to European arrival.

Negotiator: an individual who has the authority to represent or speak for a nation or other entity during a diplomatic conference or other process whereby diverse parties resolve disputes, agree upon courses of action, or bargain for advantage.

Worldview: an integrated system of deeply held, largely unconscious beliefs and concepts about the universe (natural and/or supernatural), society and the self.

This unit was created by Kathryn Wilson.   Updated for SAS by Elizabeth Fox and Kendl Hommel, Education Interns, Historical Society of Pennsylvania.