What's in a Name: Perspectives on War

Home › Education › Unit Plans › The French and Indian War in Pennsylvania › What's in a Name: Perspectives on War

What's in a Name: Perspectives on War 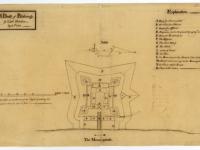 This lesson introduces students to the concepts of historical interpretation and perspective. Students will work in small groups to develop and present a fictional character that represents a person connected to the war that occurred 1754–1765. Based on the fictional character’s account, the group will develop a name for the war. As a class, students will discuss the historical importance of naming a war and how a war’s name influences current interpretations of it.

How can the story of another Pennsylvanian, past or present, influence your life?
What role does analysis have in historical construction?

Preclude to War - A Chronology

1. Write the three essential questions on the board.

2. Use “think-pair-share” to ask students to brainstorm a response to the questions individually, share their ideas with a partner, and, then, share their ideas in groups of 4–5. Record the responses on the chalk board or overhead transparency.

3.  Brainstorm reasons why there was a war in the North American colonies in the 1750s. Then, in the “think-pair-share” groups, ask students to use the timeline to make a list of events that led to the war.  To save time, you may assign each group one section of the time line. Alternatively, you can use the map of major land transfers between the Native American nations and colonial authorities, have students hypothesize about the expansion of European colonists/settlers in Pennsylvania.  How might the expansion have affected relations between Native Americans and colonists/settlers?

4. Pass out the Perspectives handout to each group. Each group will represent one fictional character who might have been in Pennsylvania at the time of the war.

5. Ask students to read the vignette and write a short profile of their character. Based on the information in the vignette, agree as a group on a name for the war which occurred between 1754 and 1765.

7. Conduct a straw poll to determine if any agreement can be reached regarding a name. Ask students why they can or cannot agree on a name.

Extension
1. Use the Four Corner strategy to return to the question, “Does it matter who names a war and does a war’s name influence how we view it?

2. Students may either talk in their Four Corner group and make a list of reasons to support their position or return to a class discussion where students express their reasons.

3. For stronger readers, have students read articles from Pennsylvania Legacies that correspond with the vignettes. Students can create their own vignettes and/or write dialogue poems between people in the vignettes. Another option is to have students hypothesize about the results of the war, then, using the articles, students can find evidence to support or oppose their hypothesis.

Colonist: inhabitant who settles in a distant territory but remains under the political control of the parent country.
Delaware: the collective name used for the Munsee and Lenape Indians.
Empire: political unit owning extensive territory or nations and ruled by one authority, often a monarch or king.
Fort Necessity: British fort hastily erected and defended by George Washington that was captured by the French in 1754.
Immigrant: someone who leaves one place to live in another with the intention of staying temporarily or permanently.
Indentured Servant: an immigrant who paid for his or her ship passage by selling his or her labor. After a certain number of years working for a master, the indentured servant became a free person in the colonies.
Iroquois: powerful confederacy of Indian tribes that once occupied the area of New York State.
Lenape: name for the group of Algonquin-speaking Indians that once lived in the lower Delaware Valley.
Militia: civilians trained as soldiers but not part of a regular army.
Monongahela: river that runs from northern West Virginia and flows north to Pennsylvania where it joins the Allegheny at Pittsburgh to form the Ohio River.
Native American: indigenous or original inhabitants of the Americas prior to European arrival.
Ohio Valley: name used in the 18th century for the region west of the Appalachian Mountains centered on the Ohio River. Control of this area was a main cause of the French and Indian War.
Pacifist: person who opposes the practice of war.
Quaker: member of the pacifist religious group officially known as the Religious Society of Friends that originated in England in the 17th century.
Settler: person who makes his or her home in a new region.
Squatter: someone who occupies an unoccupied or abandoned land that the individual does not own.
Treaty: binding agreement under international law.
Walking Purchase: name given to an agreement made in 1737 between the Penn family and the Delawares that resulted in the Indians feeling cheated out of land.

Unit Plan:
The French and Indian War in Pennsylvania

What's in a Name: Perspectives on War
Life at Fort Pitt

One or two class periods

This lesson was created by Donna Sharer. Updated for SAS by Amy Seeberger, Education Intern, Historical Society of Pennsylvania.