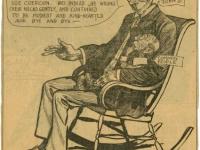 This interdisciplinary lesson plan is focused on political cartoons as a way to teach economics and the Progressive Era. The cartoons range from late 1880s to the 1912 Presidential Election, and a PowerPoint is included with background knowledge for students and teachers on the Progressive Era that works in conjunction with the cartoons. These cartoons depict several events from the time period with differing opinions. Students will be asked to analyze the cartoon to discover the author’s point of view as well as place the cartoon with background knowledge of the era. Students will also be asked to compare and contrast the cartoons to form a well-rounded opinion of the popular culture shown through the cartoons.

Drawing on a variety of sources helps students generate their own opinions and enhance their knowledge of the subject while having exposure to primary sources. It will also increase their literacy skills by improving their critical thinking ability.

How has social disagreement and collaboration been beneficial to American society?
What role do multiple causations play in describing a historic event?
What role does analysis have in historical construction?

Solving the Acrostic
Revising It
Please Omit Flowers
On Hazardous Business
"For He Himself Has Said It"
Columbia: "He's not only been abusing Billie, but the little Wilson girl said she never heard such language."
A Beautiful Fairy Tale
Their Offspring Is Just One Year Old To-Day

1. Introduce the subject matter: A PowerPoint is included in the Other Materials Section with pictures, vocabulary definitions, common symbolism, and each cartoon. There are also several background materials listed to be used as needed. This is a very brief overview, yet it allows for a basic understanding of the era or a nice refresher on the content that the political cartoons will cover. These cartoons encompass Big Business, Economics, William Taft, Theodore Roosevelt, and Woodrow Wilson. Begin with the PowerPoint and, as you go through the information and other background materials, have students write down the vocabulary words, in bold, and their definitions.

2. Introduce how to dissect a political cartoon to understand what it represents and how it relates to the subject matter. Use the cartoon “Revising It” as an example. Hand out the Political Cartoons Analysis Guide ,and walk the students through each phase laid out below, using the guiding questions if students become stuck or are unable to grasp the content.

3. Repeat the whole-class scaffolding method with the cartoon “Please Omit Flowers,” and make sure students are able to grasp the plethora of symbols. Remember to use the symbolism guide also found in the PowerPoint to help.

4. Divide the class into pairs and project another cartoon “The Hardest Job they Ever Tackled.”

a. Have each pair complete the three phases: Observation, Reflection, and Questioning and record their answers.

b. Each group will then present their findings, leading to an open class discussion on what the cartoon reflects.

5. Feel free to repeat this process with all the cartoons, or allow for students to look at the rest of the cartoons individually and record their observations followed by a class discussion.

6. If this lesson is in conjunction with ones that show political cartoons on other topics, ask the students to compare and contrast the similarities and differences in the cartoons.

Agrarian society: Society based around producing and maintaining crops and farmland.

Andrew Carnegie: U.S Steel manufacturer known for his success in the industry and for his philanthropy. (1835-1919)

Captain of Industry: The head of a large business

Dividend: The sum of money paid to shareholders of a corporation from the earnings of the corporation.

Free Market: An economic system in which prices are determined by unrestricted competition between privately owned businesses.

Industrialization: The process in which a society or country (or world) transforms itself from a primarily agricultural society into one based on the manufacturing of goods and services.

John D. Rockefeller: U.S. Industrialist who dominated the oil business and made a fortune. (1839-1937)

Laissez-Faire: “HANDS OFF” or no government interference in business.

Monopoly: The exclusive control of the entire supply of goods or of a service in a certain area or market.

Shareholder: Someone who is a holder or owner of shares in a company or corporation.

The New Nationalism: Teddy Roosevelt’s philosophy during the 1912 presidential election. He argued for the government protection of human welfare and property rights.

Theodore Roosevelt: President of the United States from 1901-1909. Known as the “Trust Buster” and a Progressive.

Trust Company: A trust refers to a large corporation where is a person who holds the property rights and generally has a monopoly or a very large piece of a certain industry. For example, US Steel and Standard Oil.

Urban: Designating a city or town. A more populated area.

William Howard Taft: President of the United States from 1909-1912. Often poked fun at for being a very large man. He was the protégé of TR, yet he is known as more conservative than his predecessor even though he is responsible for several reforms.

Woodrow Wilson: President from 1913-1921. He campaigned on a progressive platform called “New Freedom” that believed in individualism and state’s rights. In 1918, as WWI began to fall in favor of the Allies, he wrote the “Fourteen Points” speech which outlined post-war aims, including the League of Nations.