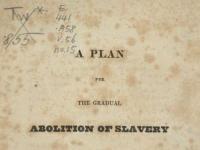 The central historical question for this lesson on anti-slavery thought is: How did abolitionists propose to end slavery?

The lesson is best taught over a series of class sessions, though it can be expanded or shortened as necessary. The key variable will be the amount of time spent on reading and analyzing documents. Teachers may choose to offer students modified versions of the documents, linked below under “Other Materials.”

How has social disagreement and collaboration been beneficial to American society?

Note that in both lessons in this unit, students will follow the same procedure. Repetition of these steps will help students develop their historical thinking skills and learn historical concepts. It will also facilitate student familiarity with the use of primary sources.

To prepare students to answer the historical question you will pose to them, build the background understanding they will need. To get the most out of this lesson, students will benefit from having previously studied the abolition movement, including plans for colonization, gradualist versus immediatist theories of abolition, the work of Frederick Douglass, and John Brown’s raid on Harper’s Ferry.

One way to help students work productively with documents is to provide them with a timeline such as the one linked under Other Materials, to be used while reading and discussing documents. This timeline should serve as a reminder of the chronology of events, rather than a first-time introduction to the events listed.

Another way to help students synthesize understanding from previous study is to review major events with a slideshow or film.

The heart of this lesson is its historical question: How did abolitionists propose to end slavery? Pose this question to students and explain that they are going to read primary sources in order to better understand the ways in which abolitionists planned to end the institution of slavery. Teachers can also ask students to attempt to answer the question before they read the documents, as a kind of pre-test or initial assessment.

There are many ways to approach the reading of primary sources with students. The Stanford History Education Group, the Library of Congress, and the National Archives all provide excellent resources for teaching students to read historical documents.

While reading the sources, students may benefit from guided questions such as the following (from the Stanford History Education Group) to help them with sourcing, contextualization, and close reading.

To complete this lesson, students must answer the central historical question by making a historical claim and supporting that claim with evidence from the documents. Teachers can ask students to do this in discussion or in writing (or both).

In general, readers of the documents used in this lesson will find that they provide the following answers to the central historical question:

A discussion of these documents might lead students to respond to the question by commenting that the answer seems to have changed over time. This is exactly what we want students to understand. In other words, plans to end slavery and plans for freed people changed depending on the context. In the 1790 petition, the absence of a specific plan, yet the evocation of American ideals of liberty and equality, is striking. In the 1825 pamphlet, by contrast, the proposal is quite detailed. Though the gradualist self-purchase scheme will strike students (as it struck many contemporaries) as far-fetched, its particulars reveal the worries of the white American public with regards to emancipation. How could slaves be freed without compensating owners for their loss? (Note the contrast between the 1790 petition’s description of enslaved people as “fellow Creatures” and the 1825 pamphlet’s characterization of slaves as mere property.) Where would the freed slaves go? And how would they learn what to do once freed?

The 1833 Declaration of Sentiments is in direct response to the received answers to those questions, including the idea of colonization. The American Anti-Slavery Society exemplified the new, immediatist abolitionists, who made uncompensated emancipation a moral issue -- but returned to a somewhat vague set of proposals for actually effecting emancipation. They advocated for use of the press and the pulpit to spread their message, which was one of “moral suasion.” They aimed to cause the nation to repent for its sin of slavery.

This moral suasion was not enough for Frederick Douglass by 1860. An appeal to morals was well and good, he argued, but it could not be the only strategy abolitionists employed, since it plainly wasn’t working. With an eye towards the coming presidential election and the threat of disunion looming, Douglass advocated for an appeal to the fears of slaveholders, using the “John Brown way” if necessary. Notably, this is the only document in this collection that mentions actions to be taken by enslaved people themselves under their own initiative.

Finally, an intriguing aspect of this subject is the larger question of how to best effect social change in society. This lesson could work well in conjunction with a study of other social movements, historical or contemporary.

Blog Post
The Craft of Teaching with Primary Documents: It's All About the Question