Now’s the time to live HSP's slogan. We are in unprecedented times and we must document our experiences. This is where you come in! More than 200 years ago Dr. Benjamin Rush tirelessly studied the Yellow Fever epidemic that swept through Philadelphia. His writings can be studied here and at our sister organization, the Library Company of Philadelphia.

As we continue to adjust and adapt to life in the COVID-19 pandemic, judging for National History Day Philadelphia 2020 went virtual! Congratulations to everyone involved! We're pleased to announce the winners (linked below):

This display runs through March 27. In conjunction with the Free Library of Philadelphia’s One Book One City initiative, we offer this display that recognizes Native Americans’ past struggles as well as contributions they have made to America throughout history. The display is free and open to the public during regular library hours.

HSP and Taller Puertorriqueño are proud to announce the launch of the website “Neighbors/Vecinos.” The website documents 200 years of Puerto Rican heritage in Philadelphia and is the end product of a project to explore how communities can create cultural programs of meaning for their members

Please click to view HSP's response to the February 15, 2020 Inquirer article on deaccessions.

“The Long Journey to Abolishing Slavery in the United States” document display is now available to view through February 21. The release of the film, “Harriet” in November, 2019 as well as the commemoration of Black History Month provides a perfect moment to display collections documenting the abolition movement from its very beginnings in England to the abolishment of slavery in the United States in 1865. The display is free and open to the public during regular library hours.

Philadelphia, PA (October 21, 2019) – The Historical Society of Pennsylvania is pleased to announce the election of Eric W. Noll in the role as Chairman of the Board. He was elected today at the 195th Annual General Meeting.

The idea that urban green spaces can have a positive impact on public health has been interwoven throughout Philadelphia’s history since the city’s establishment by William Penn in the 1600s. Penn intended for his New World experiment to be a “greene Country Towne,” and he turned to parks to improve upon the grittiness of early modern London where he was raised. Penn included five public squares in his grid system layout for the city, believing that they would contribute to his quaint agrarian vision. Despite Penn’s vision, however, Philadelphia's parks have not always been accessible to all.

The commissioning of what would become Philadelphia’s Fairmount Park occurred in the 1800s in an effort to protect Philadelphia’s water supply from the upriver industrialization that threatened it. The park originated as a private estate called Lemon Hill, which was owned by the merchant and real estate developer Henry Pratt. The 1856 book Lemon Hill in its connection with the efforts of our citizens on Councils to obtain a public park recalls the 1843 purchase of the Lemon Hill Estate by the city. This purchase was “warmly recommended by the College of Physicians of Philadelphia; as a sanitary measure, on account of its importance in the preservation of the purity of the water.” The park’s ownership transferred to the Philadelphia City Council in 1854 with the passage of the Act of Consolidation. The park was officially dedicated as “Fairmount” in 1855 with a reinstated responsibility to “preserve the water from contamination and secure at the same time in the most eligible spot near the city, a pleasure-ground commensurate with the demands of its crowded population.” 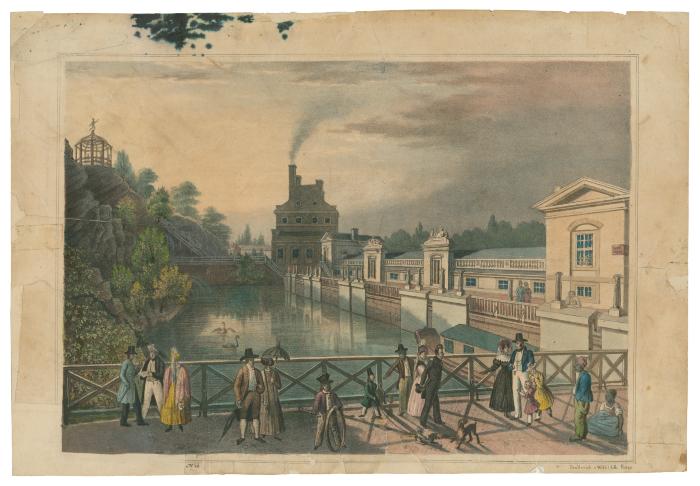 An 1833 lithograph shows a view from the floodgates looking toward the eastern side of Fairmount Waterworks.

Later in the book, the author argues on behalf of the park’s expansion and protection, given Fairmount’s limited funding during that period. He lays out a fantasy in which the park serves as an all-healing haven for the city’s masses. He envisions how people would come to Fairmount for “an hour’s repose before evening, from the dust and toil of that great city; here they were gaining refreshment and strength for the coming morrow.” Both escape and wellness were central concerns in the fight for Fairmount’s increased funding. He believes that living within the confines of the city affects not only physical laborers but the ones “whose toil is in the brain,” stating “Through confinement and want of exercise our professions are filled in the cities of this country with physical apologies for men.” A well-kempt park accessible to all, he proposed, would be the perfect antidote to the city’s supposed declining health. Accessibility to all, however, also proved a fantasy according to the 1886 publication Lemon Hill and Fairmount Park: the papers of Charles S. Keyser and Thomas Cochran. The book’s forward, authored by Horace J. Smith, documents some complaints which arose from Philadelphians in the late 1800s claiming that Fairmount was a “a rich man’s park” . . . “inaccessible to the people.” When the City Council was granted control in 1855, it assumed the grounds were “in their actual possession,” and they ordered them to be enclosed, thus excluding the Philadelphians to whom the park was originally dedicated.

While the park quickly became a contested space over which different groups tried to exercise control, the original proponents of the park had the opposite goal in mind: the park was to become an equal-opportunity healer. Charles S. Keyser, credited as Fairmount’s “creator,” writes of the park that “The air that blows about it is the common property of the poorest as of the wealthiest” and “the water that flows along it is the common heritage of all.” He continues to exalt how “Its verdure grows for the eyes of the little child ignorant for the meaning of property, and for the old man who has long outlived the hope of acquiring it.” Keyser’s comments allude to a nostalgia felt among the city’s people for not only the agrarian vision on which Philadelphia was founded, but for pre-agrarian times free from property and societal division. His comments read as a cry for communal experience, yet somewhere in Fairmount’s history this vision became muddled by the conflicting vision to use the park as a resource for economic development.

David J. Kennedy landscape painting of Sedgely mansion, which the inscription states "was situated on the East bank of the Schuylkill...north of and adjoining Lemon Hill"

The establishment of Philadelphia’s public parks, particularly Fairmount, has always been seen as a matter of preserving public health. At the same time, however, these parks historically excluded large demographics of Philadelphia's population. The history of Fairmount Park illustrates how sometimes the fraction of the “public” that public health initiatives aim to protect, is indeed a fraction, and oftentimes the most privileged fraction least in need of restorative care. As Philadelphia and the world enter an age of ever-increasing urbanization, the healing properties of urban greenery will be much discussed. It is in these conversations that we must remember the message of Fairmount’s founders to include the entire public in the city’s quest for improved public health.

Fiona Bruckman is a sophomore at Vassar College pursuing a degree in history.

In partnership with Warrior Writers, HSP is hosting The Art of Reintegration: Veterans and the Silences of War, an ongoing discussion series designed to empower veterans to share their life experiences in their own words.

“As a veteran who has dealt with the complex feelings of integrating back into society after deployment, I wanted to contribute to something greater than myself with other veteran peers,” explains Will Woldenberg, a veteran and discussion leader for the series.

Each session explores a particular theme surrounding war and veteran experiences. Discussion leaders use historical materials from HSP’s archives to help contextualize the topics that participants address—including the disconnect between veteran and non-veteran communities and the evolution of war propaganda from World War I to the present day.

During the session on the Vietnam War, a veteran who served in the conflict sparked a conversation that bridged his experience returning home with the experiences of Iraq War veterans. “[Our] story had already been written” by media outlets and activists when they returned from overseas, he explained. Soldiers who fought in Iraq echoed his sentiment, sharing that they were also deprived of the ability to express their lives in the military on their terms.

The first year's discussion group also had conversations about the Global War on Terror, suffering, reintegration, and anti-war activism.

“The series has created a forum where difficult questions can be asked without fear of judgement,” says Woldenberg.

The Art of Reintegration is made possible through funding from the National Endowment for the Humanities. New discussion participants are encouraged to apply by September 8.