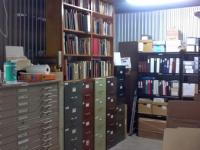 The Tredyffrin Easttown Historical Society has a variety of materials documenting the long and rich history of these two Main Line townships and their residents. The collections include subject files, maps, numerous photographs, family albums, manuscripts and other items helpful for research. If you’re like me, you might think that the name Tredyffrin looks like it’s from another language - and you would be right! The neighboring townships of Tredyffrin and Easttown were originally settled in the 1680s as part of the area known as the “Welsh Tract.”

The Tract was created when Welsh Quakers struck a bargain with William Penn for a section of land in Pennsylvania which they could settle and where governing would be conducted in Welsh since many of the settlers did not speak English. Unfortunately, in 1685, not long after Penn sold them the land, a boundary line establishing Philadelphia and Chester counties was created dividing the Tract politically, and soon after that, various townships using a more common form of governing sprang up within the borders of the Tract. Despite protests by the Welsh Quakers, a Welsh-speaking local government was never realized. Nevertheless, there are still traces of the Welsh today throughout this area of Pennsylvania. Tredyffrin hints at its old Welsh roots through its name, which combines the Welsh words tref, meaning “town,” and dyffryn, meaning “wide, cultivated valley.” Although Easttown’s name is not Welsh based, there are locations within Easttown’s borders whose names possess Welsh origins, such as the village of Berwyn.

A daily log from the Joseph W. Sharp family diaries

Berwyn is home to the man credited with being the first regular commuter from Berwyn to Philadelphia on the Pennsylvania Railroad, Joseph Webster Sharp (1828-1908). Initially, Berwyn was made up of several farms, but with the construction of the railroad in the 1830s, wealthy Philadelphians began to build country estates there as well. In 1852 Joseph W. Sharp, who owned a plumbing supply business, bought land in Berwyn and a few years later built a residence called Hawthorne. It was from this residence that he commuted daily to Philadelphia. In 1888, Sharp also founded and became the first president of the Berwyn National Bank.  By the time of his death in 1908, many people in Berwyn considered Sharp to be the “father” of the town. The Tredyffrin Easttown Historical Society collections contain the Joseph W. Sharp family diaries, 1818-1838, 1859-1907. The collection, which includes several volumes, provides glimpses into the daily activities of Joseph W. Sharp and his descendants, one of whom, David Bunting Sharp Jr., became a master of the Treweryn Beagles and a renowned figure in the sport of beagling. 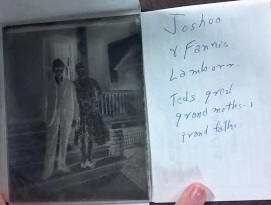 A glass plate negative of Joshua Lamborn and his wife, Fannie

Another interesting find in the Tredyffrin Easttown Historical Society collections is the Joshua P. Lamborn glass plate negative collection. Lamborn lived in Berwyn and was a member of the Easttown School Board in 1907 when it and the Tredyffrin School Board voted to unite the districts and create the first joint high school in the state of Pennsylvania. He also served as Berwyn’s postmaster from 1913-1923. In addition to his community duties, Lamborn was an active photographer during the early twentieth century. He took many photographs of his family and various sites and scenery around Berwyn during this time. The collection has over 180 glass negatives and a small photographic record book dating to around 1914. It is not often we see such a large number of glass negatives from this time period that is in such good condition. The photographic book includes several pages with photographic instructions and a couple of pages of a written daily record, which could make this a good resource for anyone interested in studying the glass plate photographic process. 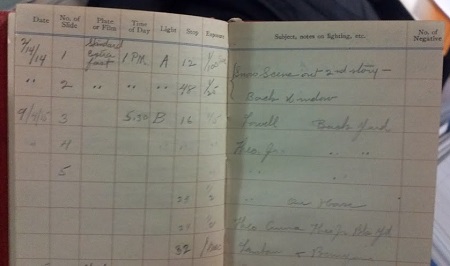