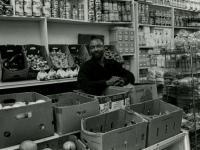 Food is one of the strongest identifiers of place and home, and as such it can unite and separate us. This unique program will feature a panel discussion and cooking demonstration with culinary leaders in Philadelphia whose identities have informed their approach to cooking and food as vehicles for learning and community building. Join us at the Culinary Literacy Center of the Free Library of Philadelphia, share your own experiences, and enjoy tastings in the kitchen.

Dr. Faye Allard-Glass (moderator) is an Assistant Professor of Sociology at the Community College of Philadelphia. Her primary areas of research and expertise are U.S. race relations and education.

Ange Branca grew up in her grandmother’s kitchen where she learned the traditional techniques of Malaysian cooking, a cuisine that bears the influence of multiple cultures dating back to the 14th century when Malaysia was a spice trading hub. Though she grew up in a culinary family, she spent the first part of her career in business consulting for international corporations like Deloitte, Fujitsu and IBM, which landed her in the US. After years of living abroad, her nostalgia for the flavors of home coupled with what she perceived as a dying appreciation for humble Malaysian cuisine back home inspired Ange to open Saté Kampar, a restaurant focusing on saté (skewered meat grilled on coconut shell charcoal) and traditional Malaysian cooking made from scratch with unique ingredients specially grown for the restaurant or imported from Malaysia. The restaurant quickly became one of Philly’s top restaurants, voted Best of Philly in 2016 for Best New BYOB, and in 2017 for Best Coffee Drinks. Zagat named Saté Kampar the top 10 most important restaurant openings. In 2017 Saté Kampar was nominated for the James Beard Award. She is a member of the Les Dames d’Escoffier, an international organization of woman leaders in the culinary field.

The diversity of food and culture that Ange grew up with in Malaysia inspired her latest project, a charity dinner series, Muhibbah Dinners. Muhibbah—when people of multiple cultures, races and religions come together in peace and tolerance—is best appreciated when a good meal is shared. Ange started Muhibbah Dinners to bring together chefs of different backgrounds and cultures to celebrate diversity with diners in Philadelphia and raise funds for nonprofits that work with immigrants and refugees.

Ari Miller's culinary roots began during a decade in Israel, as the dining writer for The Jerusalem Post. He transitioned into the professional kitchen by way of a tiny, little deli connected to Tel Aviv’s The Basta. He then moved to The Minzar, the White City’s legendary 24-hour bar, where he learned food preparation from Eastern European classics (sausages, pickling, fermenting), to North African cuisine (whole animal use), and Middle Eastern standards (hummus, spices, salads). Ari then worked for Chef Rima Olvera first at her exclusive, luxury supper club Omnivore and then as her sous chef at her inaugural restaurant Oasis. Back in America, Ari has worked on the lines at Percy Street BBQ and High Street on Market. He is the chef/owner of Food Underground, specializing in culinary series, private dining, and pop-up events. Additionally, he opened the kitchen at Philadelphia Distilling and was resident chef at Lost Bread Co.

Chris Paul developed a passion for cooking after living in Haiti for most of his childhood. His first job was as a line cook at 16 and he hasn’t stopped since. A graduate of Drexel University’s Culinary Arts program, he has worked for various Stephen Starr and Jose Garces establishments. In addition, he held the Executive Sous Chef post at Birchtree Catering a local and sustainable caterer. From his background with food and his experiences farming in Haiti and urban gardening in Philadelphia, Chef Paul fell in love with the use of seasonal and local flavors to develop dishes. Most recently he was chef & partner at Herban Quality Eats, an ingredient-driven fast casual restaurant. Since Herban’s closing, Chef Chris Paul continued as a private chef, ServSafe Instructor for various restaurants, and culinary educator for the Free Library of Philadelphia. All of these elements have been combined into Everything We Eat, LLC, with his wife, Leigh-Ann.