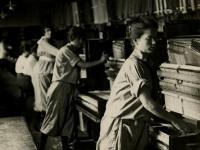 *This blog is the twelveth in a series by Sarah Sharp, Global Educator for World Heritage Philadelphia.

Some of the dramatic events that occurred in Philadelphia in the realm of work life and labor union activities aorund 1900 may be better known than the social activism and advocacy mentioned in the last blog.  Even if we only consider the textile manufacturing sector of the Philadelphia economy, we see both the uniqueness of Philadelphia’s story as well as patterns shared with other American cities.  By the 1880s, Philadelphia hosted over 800 manufacturing firms, double the number from 1870, with another 100 mills in nearby counties.  Production focused on smaller-scale batch production of specialized woven goods, a pattern that differed from New England cities where bulk weaving was produced in very large establishments.  Powered looms and electrical lighting, among other changes, also shifted who did the work in this period.  Until the 1880s, western European populations dominated both owner and worker groups.  At this point, however, eastern and southern European immigrant women, particularly German, Russian, and Italian, became far more visible as the major manufacturing workforce.  Focusing on this group shows us state, national, and international connections in matters related to industrial work and immigration.

In the late 1800s, unionism, strikes, and general labor unrest increased across Philadelphia and in the state of Pennsylvania.  Strikes among transportation workers (motormen and others) were especially noticeable in the 1890s and put the spotlight on the major expansion of trolley, streetcar, and other transit systems that occurred in Philadelphia.  Pennsylvania’s 1889 Homestead Strike and continued labor unrest in 1892 and 1919 may be famous for notable male actors, such as Henry Frick and the Pinkertons.  In fact, women’s collectives and their female networks formed a strong presence in crowd actions, “jostling the Pinkertons with umbrellas, brooms, and blackjacks,” and completed daily chores of food preparation and child care (Greenwald, Pennsylvania History, Winter 1996).

In another perhaps less well-known action, the March of the Mill Children occurred in 1903, staged by Mary Harris Jones (1830-1930), also known as Mother Jones.  The strike drew attention to children’s labor in the City’s Kensington section and elsewhere in Pennsylvania.  Hundreds of youth and their parents walked from Philadelphia to New York City and the home of Governor Theodore Roosevelt (1858-1919) in Sagamore, New York.  The historical marker north of City Hall in Center City Philadelphia marks this dramatic event.

Several years later, women and their sewing shirtwaists came into even more prominence with the Triangle Shirtwaist Factory fire of 1911in New York City.  The shirtwaist workers’ strikes had preceded it in both New York City and Philadelphia in late 1909 and early 1910. In these events in both cities, the unionism and the fates of eastern European women who worked in risky manufacturing settings come into treacherous view.  In Philadelphia, a special aspect of the story about this month-long strike involved the actions of suburban women who assisted the strikers in several ways.  Not only did they raise money to support the women, they also joined picket lines and some even got arrested.  Young female Bryn Mawr College students were among these supporters, demonstrating that many types of women recognized workplace struggles and made efforts to assist people in desperate working conditions.

Economic activity involving women also involved state and national legislation enacted, as well as court decisions, in the early decades of the 1900s.  Many European nations and numerous states across U.S. passed legislation setting boundaries on women’s working conditions and hours.  Between 1897 and 1913, the Pennsylvania legislature passed the Employers’ Act, a Child Labor Act, a Factory Conditions Act, a Female Employment Act, a Fire Drills Law, a Mattress Act, a Women’s 54-hour Work Week Law, and a Mothers’ Assistance Fund Law, all against a backdrop of federal laws that addressed some similar concerns.

In this same span of years, the Pennsylvania Superior Court heard two Philadelphia cases with women’s activities at the core, such as Commonwealth v. Beatty (1900) which involved a Philadelphia cotton hosiery manufacturing business. At the level of the U.S. Supreme Court, Muller v. Oregon (1908) upheld a state law setting a ten-hour day for women.  The reasoning for this Oregon statute had been that women were too weak to work longer hours, and much of the Pennsylvania legislation regarding women’s work conditions and its defense rested on the same argument.  Numerous Philadelphia and Pennsylvania women’s groups advocated for such legislation to shield their sisters laboring in numerous industries, particularly manufacturing sites,from horrific working conditions.

Finally, as it is clear from many sources and activities mentioned above, economic opportunities for women expanded during this period, along with the challenges to industrial conditions in Philadelphia and elsewhere.  As department stores opened in the City, for example, female sales clerks’ positions grew.  Secretarial and beauty schools drew new students for training, and teaching positions opened up in large numbers.

Hepp, The middle-class city : transforming space and time in Philadelphia, 1876-1926