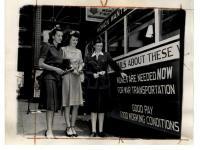 Women's History Month is a time for us to recognize and salute women's contributions to society and the American family. In honor of Women’s History Month, we’ve put together a list of featured lesson plans from HSP’s collection. These lesson plans offers a wealth of primary sources to help students on all grade levels dive deep into analyzing the great contributions that women have made to our nation. Learn about the history of women in the United States by exploring primary sources from the War of Independence to the World Wars. Then, explore all of our Women’s History focused lesson plans here.

Unheard Voices from the War of Independence

The American Revolution is commonly perceived as the tale of thirteen fed-up colonies banding together to defeat the tyranny of Great Britain, but is this really how it happened? The primary sources in this unit bring to light societal values, relationships between men and women, and the placement of women in the fight for freedom. The documents illustrate that women played a duel role in the American Revolution. On one side, they were a driving force and enthusiastic voice during the War of Independence. Yet, at the same time, women were constrained by a patriarchal society and restrictive gender roles. This unit exposes students to dissenting and often unheard voices from this contradicting time in our nation’s history.

Scholars in the 17 and 1800s argued that botany was a suitable science for women to learn, and by the 1800s, it became an integral part of women’s education. The following lesson combines history with language arts and science in order to learn the parts of a plant, poetry, and how to create a herbarium using 19th century textbooks specifically designed for women. In the mid-1700s, Swedish naturalist Carolus Linnaeus created a system of taxonomy that revolutionized botanical study and is the basis for our modern system of classification. Linnaeus’ work was made possible by communication with networks of learned scholars and collectors, which included women.

Emilie Davis was a free black woman living in Philadelphia during the Civil War. Her three diaries, written in 1863, 1864, and 1865, highlight her perspective on many important historical moments, such as, the Emancipation Proclamation, Lincoln’s assassination, and the Battle of Gettysburg. Comparing her diaries to other accounts and sources from the same time period will allow students to see the world in which that Emilie lived. As a woman in her early twenties, she was concerned with her personal goals, friends, and daily routines. Yet, layered within those accounts, is a world where racism is still very prevalent and violence is often not far away.

Pennsylvania Women and the Quest for Women's Suffrage

When the 19th Amendment was ratified in 1920, Philadelphia was the largest city and Pennsylvania was by far the largest state in which women had not previously had the right to vote. Several Pennsylvanians had been prominent leaders in the long struggle to secure woman suffrage. Women like Dora Lewis and Caroline Katzenstein were active in the Pennsylvania and national branches of both the National American Woman Suffrage Association (NAWSA) and the National Woman’s Party (NWP), the two organizations most responsible for the passage and ratification of the 19th Amendment. When the 19th Amendment was officially added to the Constitution in 1920, Pennsylvania women could take a great deal of credit. The collections of Caroline Katzenstein, Dora Lewis, and others at The Historical Society of Pennsylvania contain numerous documents that will allow teachers and students to explore and analyze this under-recognized chapter of state and national history.

This unit examines the struggle women endured economically, politically, and socially in the United States during the 18 and 1900s. Through the analysis of the Hucksters' Petition, National Woman Suffrage Association's Constitution, and the Equal Rights Amendment brochure, students will understand the struggle women encountered in their fight to obtain economic and political rights.