The “Original 9” before Title IX

The “Original 9” before Title IX 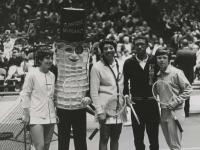 This article was published in the fall 2018 issue of Pennsylvania Legacies (vol. 18, no 2): Protest in 1960s Pennsylvania.

For decades, pay inequality between men and women has been an issue in the business world, in entertainment, in politics, and in the sports arena. One collection at the Historical Society of Pennsylvania documents the efforts of several women to level the playing field in at least one of these areas: women’s tennis. One of the women represented in this collection is tennis player Billie Jean King, who may be most famous for her 1973 “Battle of the Sexes” tennis match in which she beat Bobby Riggs in three straight sets. But this match was only her second foray into the fight for gender equality—she first was a member of the “Original 9”. 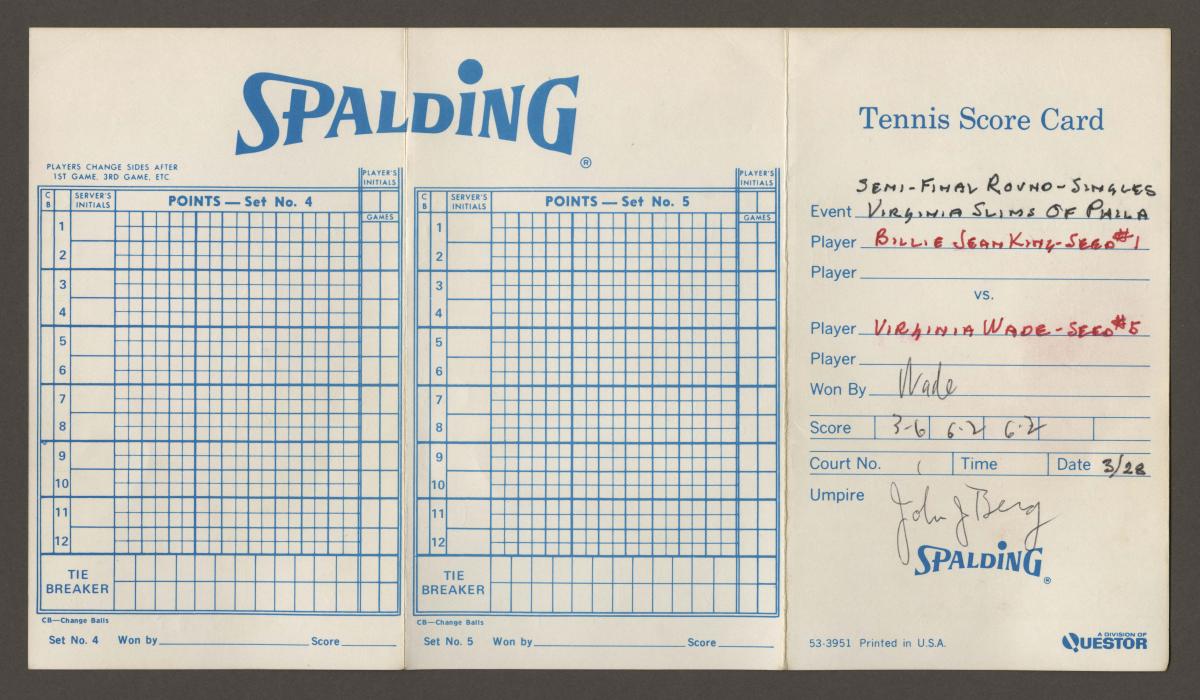 The “Original 9” formed in response to the massive disparity between prize money for male and female tennis match winners. This issue received increasing attention in the late 1960s and early 1970s, as Billie Jean King consistently won tennis tournaments, including the first Open Wimbledon in 1968 and the Italian Open in 1970. The 1968 Wimbledon was the first tennis event where both professional and amateur players could compete in the same match for prize money. During this historic tournament, Billie Jean King won £750 for taking the women’s singles title, while Australian tennis player Rod Laver was awarded £2,000 for winning the men’s. In total, prize money for the Wimbledon competitions were £14,800 for men and only £5,680 for women. King, after having won the women’s singles at the Italian Open, received $600 in prize money, while Ilie Nastase, the winner of the men’s singles, received $3,500. Nastase received almost six times as much as King for the same win.

The huge discrepancy between prize money allotted for male and female tennis players was no longer palatable for female players. They had clearly proven their skill as athletes on the court and felt it was time to be recognized as valuable assets to the sport. King, along with eight other women—Rosemary Casals, Judy Tegart Dalton, Nancy Richey, Peaches Bartkowicz, Kristy Pigeon, Valerie Ziegenfuss, Julie Heldman, and Kerry Melville Reid—decided it was time create more, and equal, opportunities for female tennis players. The “Original 9,” as they were soon to be known, enlisted Gladys Heldman, publisher of World Tennis magazine, to help make their vision a reality. 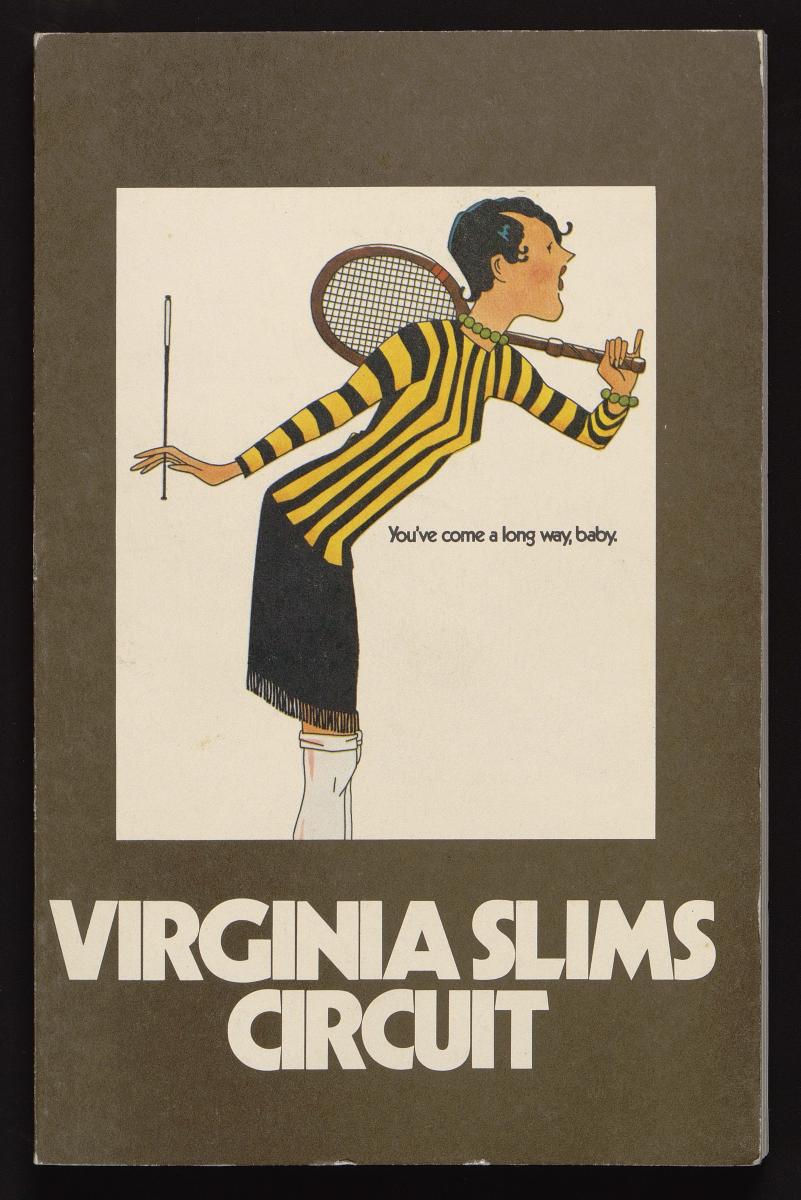 Originally, the “Original 9” planned to protest pay inequality by boycotting the Pacific Northwest tournament in Los Angeles, but they soon deemed this tactic too passive. Instead, they decided to make a larger statement by starting their own tour of female tennis players. This ambitious plan required a sponsor. The “Original 9” and Heldman convinced Joseph Cullman, chairman of Phillip Morris, to invest in their venture. Cullman had also been chairman of the US Open in 1969 and 1970 and was already highly involved in the tennis world. The resulting tour of eight professional tournaments was sponsored by Virginia Slims, a brand of cigarettes owned by Phillip Morris. Each of the women of the “Original 9” signed a symbolic contract for $1 ahead of the first tournament. 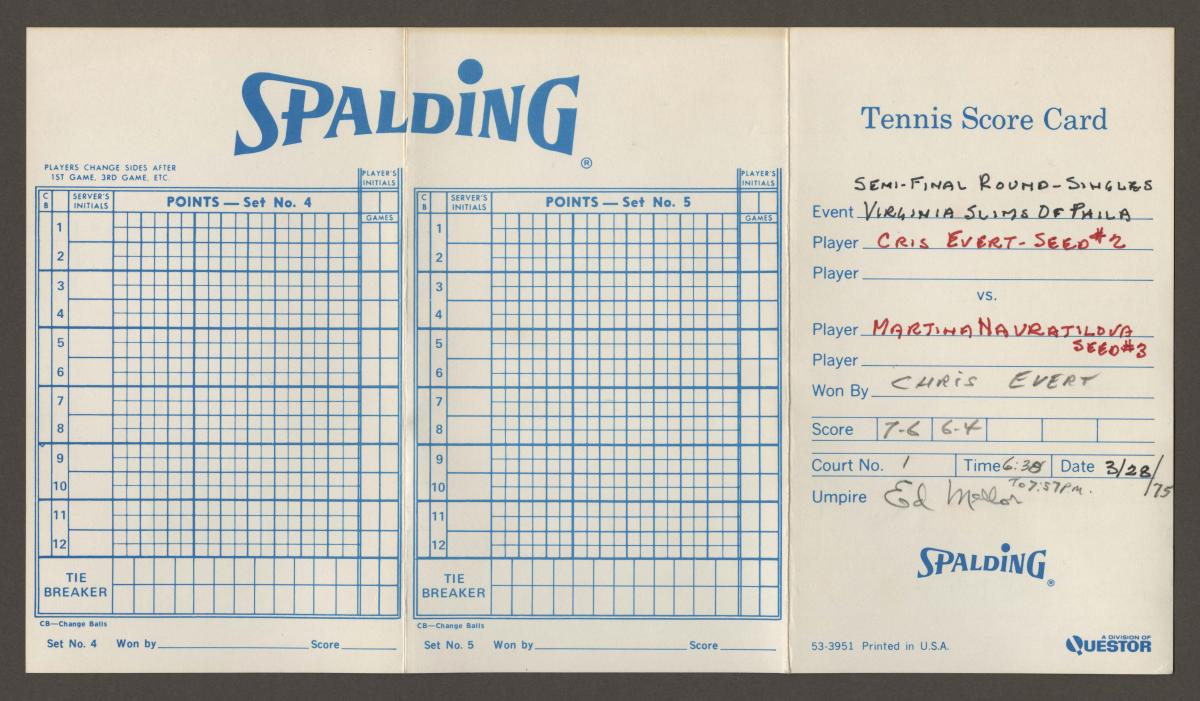 The Philadelphia stop of the Virginia Slims Circuit was coordinated by Marilyn and Ed Fernberger, who co-chaired the tournament from 1970 through 1979. Married in 1947, the Fernbergers shared a mania for all things tennis and used their prodigious skills as organizers and promoters to help bring tennis to the masses. They started a nonprofit called the Philadelphia Indoor Tennis Corporation with the goal of funding free public tennis and scholarship programs for children, and by 1968, they had raised $13,000 for these programs. Up to this point, they had been running strictly men’s tennis events, so when the Virginia Slims Circuit was gaining momentum, they leaped at the chance to further expand tennis in Philadelphia. In 1970, they ran a combined tournament at the Spectrum, a sports stadium that operated from 1967 to 2009 in the South Philadelphia Sports Complex. Following the initial tournament, the circuit expanded with more players and a location change to the Palestra, the University of Pennsylvania’s stadium in University City. 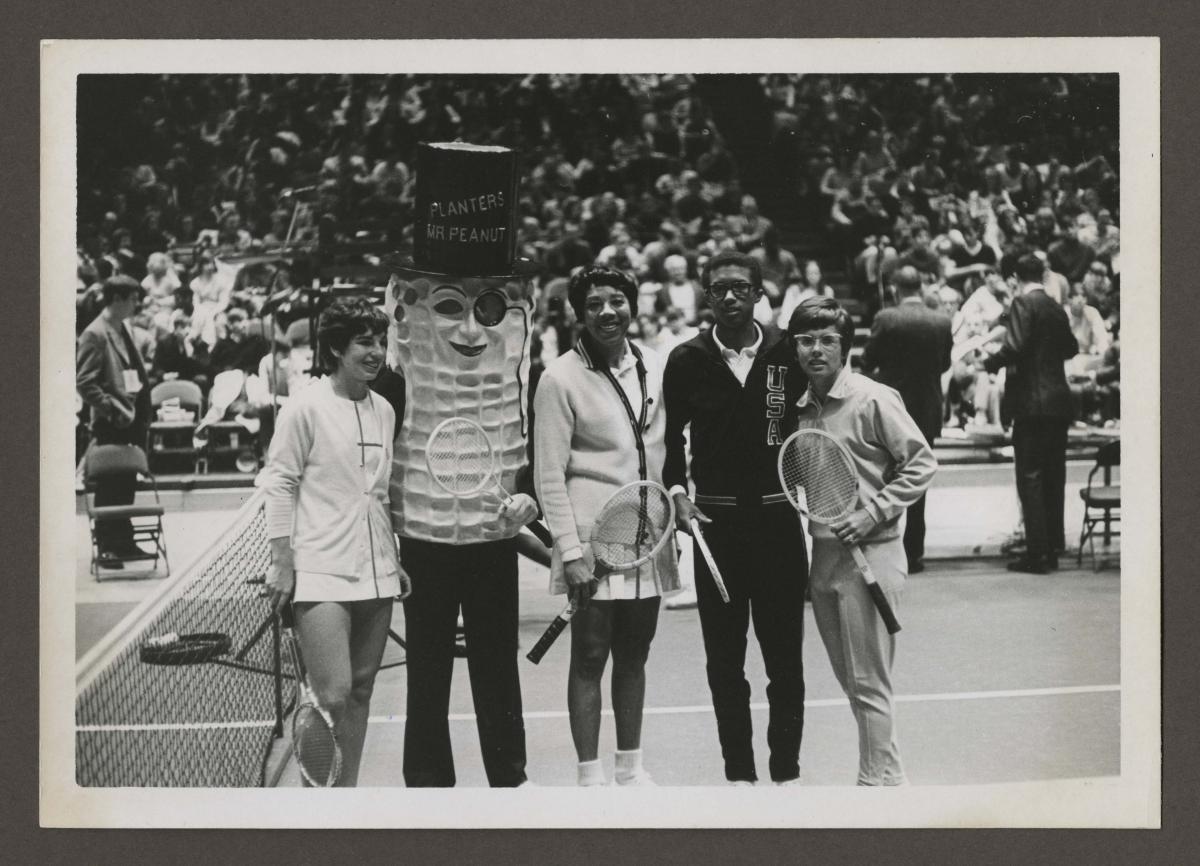 As Virginia Slims Circuit continued to gain attention, the Fernbergers remained at the helm. While not talented tennis players themselves, they were extremely well known in the sport. Marilyn organized the Virginia Slims Circuit each time it was in Philadelphia with help from her husband. A real estate developer by day, Ed was also a talented sports photographer who captured images of players and matches while attending various tournaments. His photographs were published in World Tennis and other publications, and he donated his collection of more than 100,000 photographs to the Tennis Hall of Fame in Newport, Rhode Island. The Fernbergers attended numerous tennis matches across the globe and ran an informal tennis hostel at their home in Huntingdon Valley, Pennsylvania. Tennis players who passed through Philadelphia were always welcome at the Fernbergers, with Marilyn going so far as to write players’ mothers to find out their favorite foods.

Their passion for the sport is well represented in the Marilyn and Edward Fernberger Collection on Philadelphia Professional and Amateur Tennis Tournaments, held at the Historical Society of Pennsylvania. This extensive collection, which spans 1962 to 1992, covers many facets of the work Marilyn and Ed Fernberger put into co-chairing the numerous tennis tournaments in their care, including the Philadelphia leg of the Virginia Slims Circuit. The collection contains scrapbooks with press releases and newspaper articles detailing the matches and interviews with players such as Billie Jean King, Chris Evert, Evonne Goolagong, and Virginia Wade, as well as ticket stubs, press badges, parking passes, press packets, and other ephemera related to the Virginia Slims Circuit. There are many photographs of the women tennis stars associated with the tournament, including Billie Jean King and Chris Evert, and scorecards for matches held as part of the Virginia Slims of Philadelphia tour. There are also folders that showcase the behind-the-scenes work it took for Marilyn to host such a prestigious event, including menus for press lunches, hotel arrangements, and discussions about making tea the official beverage of the Virginia Slims Circuit. Marilyn was an integral part of putting this tournament together, a fact recognized in a few thank you cards from players, including Peaches Bartkowicz, one of the Original 9. The Fernbergers worked tirelessly to ensure the success of the Virginia Slims Circuit and to ensure that the dream of the Original 9 would continue.

Annie Halliday recently received her masters from Drexel University and is previously worked in the archives department at the Historical Society of Pennsylvania.

This article was published in the fall 2018 issue of Pennsylvania Legacies (vol. 18, no 2): Protest in 1960s Pennsylvania. Learn more and subscribe.