(Bad) Luck of the Irish in Political Cartoons

(Bad) Luck of the Irish in Political Cartoons 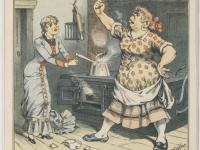 The Irish are probably the most represented ethnic group in the Historic Images, New Technologies project cartoons. That's not great for the Irish. If any individual or group shows up with any frequency in political cartoons, you can be sure that most, if not all, of these representations will be negative. And the Irish were a favorite punching-bag for one of the most innovative and influential illustrated humor magazines of the late 19th and early 20th centuries, Puck. This magazine commented extensively on some of the most significant episodes in Irish and Irish-American history during this tumultuous period—and it invariably did it in the most insulting way possible.

Did you know that the Irish National League of America, which formally supported the creation of an independent Irish nation, was founded in Philadelphia in April 1883? This cartoon is how Puck illustrated this development: 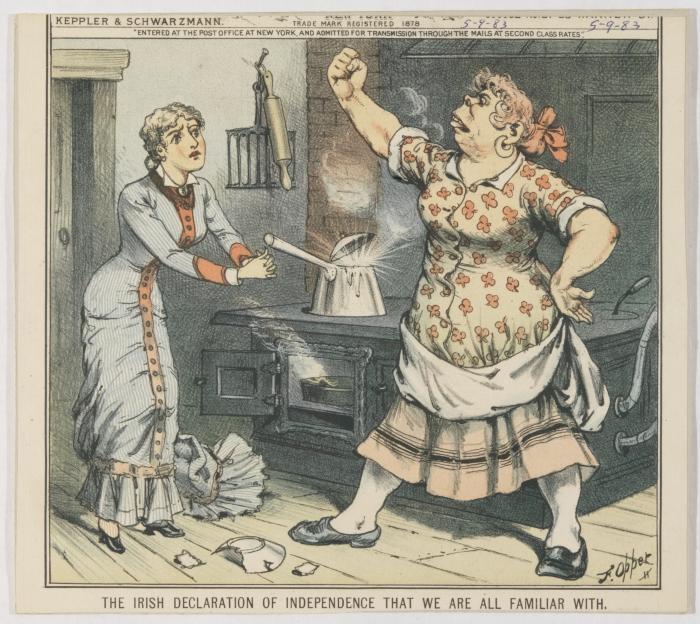 "The Irish Declaration of Independence That We are All Familiar With," Puck, May 9, 1883. Balch Broadsides: Satirical Cartoons (PG 278)

"The Irish Declaration of Independence That We are All Familiar With" (May 9, 1883) features a caricature of an Irish female domestic worker violently "declaring independence" from her white American mistress. This Irish housemaid, like so many Irish and Irish-American subjects of Puck cartoons, is drawn with exaggerated, ape-like features.

How about the fact that many hard-working Irish-American immigrants sent their meager ownings across the Atlantic to aid their family members in Ireland? For a cynical view, with a bonus helping of negative stereotypes, look no further than Puck's "American Gold": 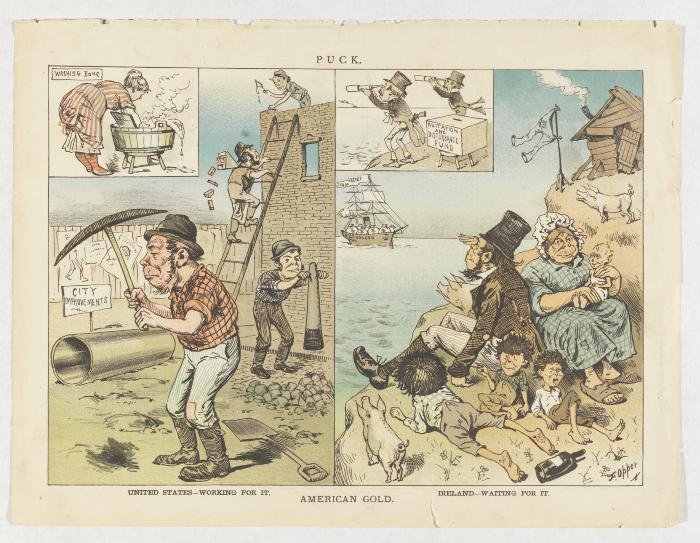 In this cartoon, although the Irish-American laborers are portrayed with some dignity (although they have exaggerated facial features, they are portrayed as hardworking), the Irish family awaiting the money sent from America is shown to be lazy and drunken—lolling on a hillside among pigs and whiskey bottles. Worse yet, an inset above them shows Irishmen with a cash box for "Agitation and Disturbance" waiting to intercept the American riches.

Puck's cartoonists and editors were dependably scornful of attempts to relieve the suffering of Irish peasants as well as of attempts to advocate for Irish independence from Britain. In February 1880, when New York Herald editor James Gordon Bennett raised over $200,000 to send food to famine victims in Ireland, while at the same time Irish National Land League President Charles Stewart Parnell raised money to allow Irish tenants to purchase their own land from British landlords, Puck implied that any money sent to aid the Irish was taking food out of the mouths of American paupers. 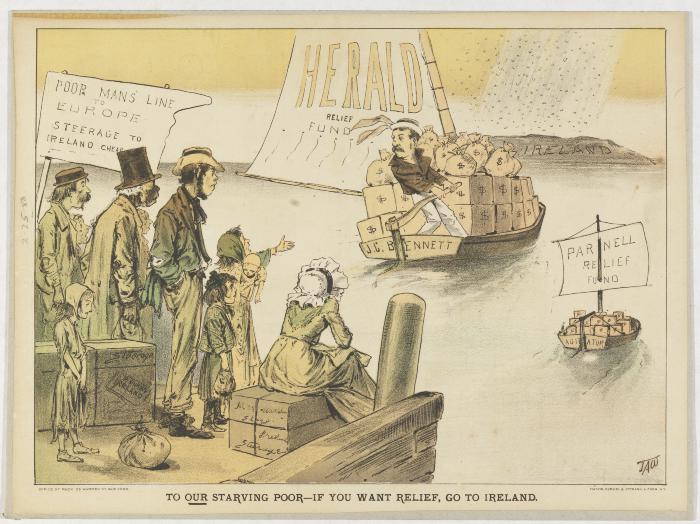 While the stereotypes in these cartoons may be offensive, the events they comment on are fascinating. It's our hope that studying these rich visual resources will allow modern audiences to learn more about the important events and trends that these cartoons comment on, and to reflect on how visual representations shape public perceptions.

Want to learn more about these cartoons even before our exhibit site, Politics in Graphic Detail, launches? Check out "Window on the Collections: A Cartoon View of Irish Nationalism," in the fall 2014 issue of Pennsylvania Legacies.