Because Dana and I are primarily viewing the history of Bankers Trust Company through the eyes of Albert M. Greenfield- since we’re using his papers- we have come across other story lines relating to Greenfield and his numerous other ventures that continually weave in and out of the story of the bank. This is because Greenfield, who was involved in an overwhelming amount of businesses and projects in the city of Philadelphia and beyond, used Bankers Trust for pretty much all of his enterprises.

Unfortunately, though understandably, we can’t explore these other stories in depth since they’re not within the scope of our project. However, we do touch upon some of them in the annotations and contextual information that we’ll be providing.

One of the stories that we’ve focused on more than others, due to its especially close alignment with Bankers Trust Company, is the story of Bankers Securities Corporation. I’ve revisited the history of the beginnings of this investment firm as I’ve begun to proofread the 300 plus documents that Dana and I transcribed and encoded using TEI.

Bankers Trust Company came to serve as the springboard for Bankers Securities Corporation, an investment firm that Greenfield and Samuel H. Barker, president of Bankers Trust, established in the spring of 1928. Greenfield was elected chairman of the board, a position he held for 31 years. 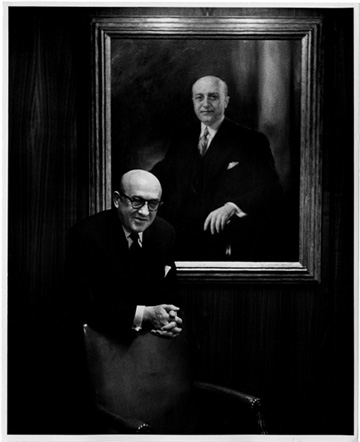 Greenfield in the Bankers Securities Corp. board room,1957

From his letters to Greenfield, Barker appears to have been the mastermind behind this endeavor. He really began to push for the creation of a securities corporation only a few months after Bankers Trust was incorporated (December 1926). He emphasized the need to have an investment firm in order to substantially increase Bankers Trust’s business and profits.

Along with the boom in the real estate and banking industries during the 1920s, there was also a significant increase in securities companies. These companies served as bank affiliates that were created and owned or controlled by banks. They were able to deal in stock and bonds to an extent not permitted to banks.

In a letter to Greenfield dated July 8, 1927, Barker writes:

“The more I think of the matter, the more am I convinced that it is a step which ought to be taken very soon. I am sure it will result greatly to the advantage of Bankers Trust Company and its stockholders, and to our group in many direct and collateral ways.” (“Our group” most likely refers to the business syndicate of which Greenfield and Barker were members.) 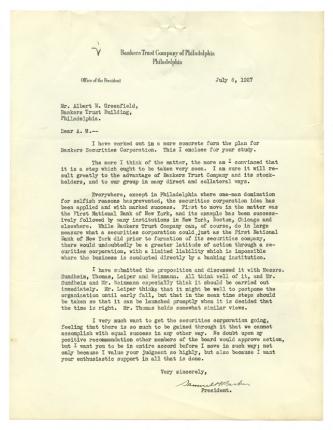 Barker may have been onto something. Bankers Securities was worth $31 million not even a year after it was founded.

“Bankers Securities corporate operations are entirely distinct from Bankers Trust Company, but both companies are being conducted to promote and supplement the activities of each other.” 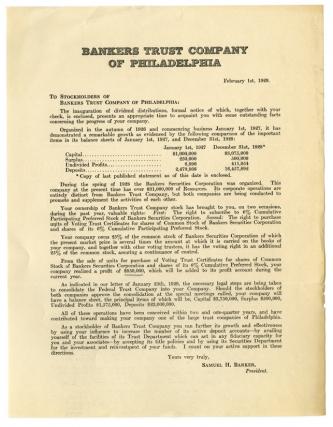 Needless to say, Bankers Securities became an extremely successful enterprise with numerous prominent investors including Greenfield’s friend, film producer William Fox, who for a time, along with Greenfield, was one of the corporation’s largest stockholders.

Bankers Securities was strong enough not to get dragged down alongside Bankers Trust, even though it had a significant amount on deposit and owned a large amount of stock at the time of the bank’s closing. It was largely due to the continued success of Bankers Securities that Greenfield did not lose everything after Bankers Trust’s failure.

Those who are interested in learning more about Bankers Securities Corporation should consult the Albert M. Greenfield papers (Collection 1959), which contain a plethora of materials and information about the company.

References:
Daniel Rottenberg, “Once there was Greenfield,” Philadelphia Magazine (May 1976).