Behind the Marches: Bayard Rustin and the Journey of Reconciliation

Home › Blogs › Fondly, Pennsylvania › Behind the Marches: Bayard Rustin and the Journey of Reconciliation

Behind the Marches: Bayard Rustin and the Journey of Reconciliation 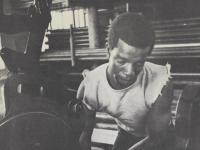 Born on March 17, 1912 in West Chester, Pennsylvania, Bayard Rustin grew up in a relatively wealthy family that made its fortune in the catering business. Prominent figures within the African American community frequently visited his childhood home, including James Weldon Johnson and W.E.B. Du Bois. This experience with social and political leaders perhaps served as an inspiration to the young Rustin to become an advocate himself when he entered adulthood.

From labor rights to civil rights, the feminist movement to the gay rights movement, Rustin emerged as a prominent leader in a number of social struggles. Despite his stature and celebrity, however, few are aware of the role he played in the Journey of Reconciliation: the original Freedom Ride. During this protest, he demonstrated a brand of non-violent direct action that inspired Martin Luther King, Jr.’s activism during the 1960s.

The Journey of Reconciliation in the summer of 1947 was a response to the Supreme Court ruling of June 3, 1946, that deemed state laws demanding the segregation of interstate passengers on motor carriers unconstitutional. As a result, any buses or trains crossing state lines had to be desegregated, regardless of state laws that still enforced segregated transport services.

The Journey of Reconciliation was organized by the Congress of Racial Equality (CORE) and the Fellowship of Reconciliation (FOR) with support from the American Friends Service Committee (AFSC). In a carefully planned journey, sixteen men traveled through fifteen cities, from Washington D.C. to Kentucky via Virginia, North Carolina, and Tennessee, and back again. The sixteen men were equally divided racially: eight men were black, and the other eight were white. The participants planned to sit in open defiance of state segregation laws by having the black participants seat themselves in the front of the bus while their white counterparts sat in the back.

Rustin represented the AFSC as a participant in the Journey of Reconciliation. As a man who had grown up in a Quaker household and previously travelled to India to learn from Gandhi and his methods of non-violence, Rustin exemplified the early non-violent protest efforts of the era.

The Journey of Reconciliation yielded no fewer than sixteen arrests, with several of the participants receiving sentences of up to ninety days on a chain gang. The details of each arrest—who was arrested, how each arrest was made, whether or not there was any police abuse—were painstakingly documented in a report by Rustin and his fellow freedom rider and FOR organizer George Houser.

Reading through the report (which is accessible in the archives at HSP as part of a collection of Rustin’s essays and speeches) provides invaluable insight into the early civil rights movement. Jim Crow laws were still rampant, not just in the Deep South but in the Upper South, too. These documents—which underscore the very real threat of physical harm, arrest and racist abuse activists subjected themselves to—showcase the participants’ bravery and conviction.

Rustin wrote additional reports on endemic racism of the South. In the mid-1950s, he travelled to the heart of sharecropper country to record the injustices faced by black families struggling to eke out a living. Rustin also served as a reporter covering the bus boycott in Alabama that led to the meteoric rise in fame of Martin Luther King Jr.

Prior to his work with AFSC and CORE, Rustin had been a member of the Young Communist League of City College of New York. The Communist movement in the 1930s held progressive stances in terms of racial integration and equality, two factors that undoubtedly attracted Rustin to its cause. Though he eventually distanced himself from Communism, Rustin remained a firm supporter of the American labor movement.

Rustin would remain a writer and activist for much of his life. In the May 1971 issue of Harper’s Magazine, Rustin published an article titled “The Blacks and The Unions,” which examined the relationship between the black community and labor unions. He delved into the past to analyze the hardships suffered by the black populations that migrated from the South to the North, where urban environments broke up the sense of community that was a predominant characteristic of life in the South. 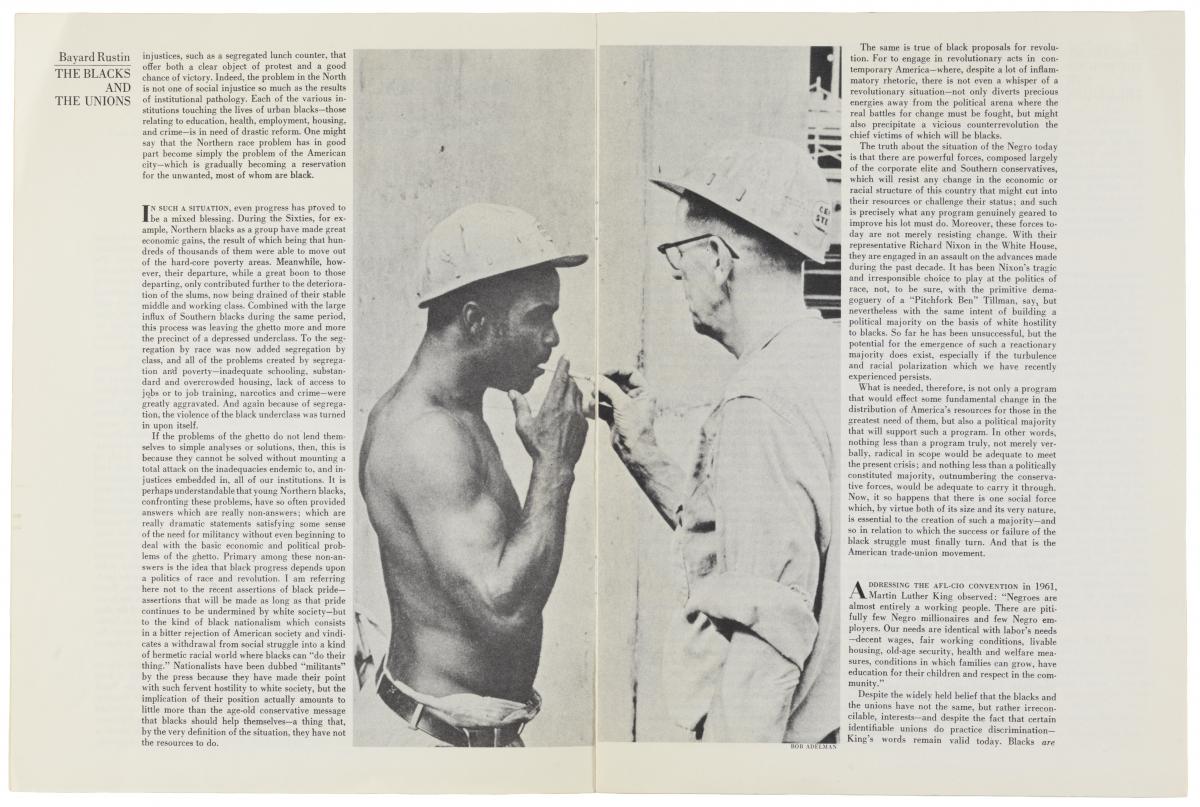 Centerfold page for "The Blacks and The Unions" by Bayard Rustin, May 1971

Rustin’s familiarity with the labor movement and his prominence in the civil rights movement intersected in the article, as he argued against separatism and advocated for integration by the black community into the more populous white proletariat. It is only through such integration that Rustin saw the black population overcoming exploitation in the United States.