The Desegregation of Girard College

The Desegregation of Girard College 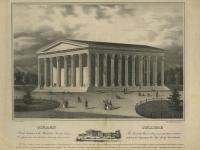 The 1950s and 60s witnessed an unprecedented push for desegregation in the United States. In 1954, the landmark Supreme Court case Brown v. Board of Education declared that racially segregated public schools were no longer legal. This decision marked the beginning of an almost 15-year-long struggle for the racial integration of Girard College that culminated with the admission of black students in 1968.

French immigrant Stephen Girard conceived of Girard College in the early 1800s as a college preparatory school that would provide “poor white male orphans” with a full scholarship. Girard ordered that the school be funded through his estate and left specific instructions as to its organization. Opened in 1848, the school was radical because it provided all of its students with rigorous academic and vocational training for free. As Girard College President James Frances Cooke stated in a 1943 address, the transcript of which is in the HSP archives: “It has been a Philadelphia ‘first’ in the philanthropic scope of its service—a complete education and complete maintenance without charge. Philadelphia must always feel a sense of security in knowing that its fatherless boys can be taken care of adequately.”

But the college did not extend this care to a significant part of the young male population in Philadelphia. Girard College was still a white-only institution in 1954 when the Supreme Court ruled on Brown v. Board of Education, and it did not integrate following the decision. When a Philadelphia solicitor and councilman filed a lawsuit on behalf of six black boys who were denied admission in 1955, Girard College replaced its publicly affiliated City Board Trusts with 13 privately appointed trustees, effectively making the school a private institution. As such, it could legally continue to reject black applicants.

Girard College’s refusal to voluntarily integrate inspired a movement led primarily by  Cecil B. Moore, a Philadelphia lawyer, councilman, and NAACP chapter leader. Moore spearheaded years of protests and legal battles to integrate the school. The movement garnered so much attention that Martin Luther King Jr. joined a protest outside the school walls in 1965. These walls were, King said, “a kind of Berlin Wall to keep God’s colored children out.” In 1968, the Third Circuit Court of Appeals upheld a ruling that Girard College must accept black students. The first black students attended the school in September of that year.

After the school was finally integrated, African American enrollment rose quickly; by the late 90s, 79% of the student body was black. In 1997, The Philadelphia Inquirer ran a three-part series on Girard College in which it reported that the Board of City Trusts had significantly cut funding to the school since 1992, resulting in fewer programs, lower teacher salaries, and an overall reduction in the quality of education. The Inquirer drew a link between the budget cuts and the increase in black students, claiming that it was a sign of racial bias. Girard College’s Board, meanwhile, claimed to have cut funding to the school because they were worried about running into financial troubles.

An independent committee was assembled to investigate the allegations. The Nelson A. Diaz Collection at HSP contains records of the Inquirer articles and the ensuing investigation saved by Diaz, a Philadelphia lawyer and judge who served on the independent committee. After analyzing Girard College’s budget and interviewing Board members, the committee ultimately found “no correlation between the rise in numbers of African American students and the level of per pupil spending for operations and instruction.” The committee’s final report recommended that the Board of Trust “be mindful that given the history of the school the perception of a racial bias will always persist.” Committee members referred the Board to a document drawn up by the Black Clergy of Philadelphia which recommended that the Board of Trust and the Board of Managers include more black members and that Girard College engage more closely with the primarily black neighborhoods around the school.

These recommendations, echoed by many other groups in Philadelphia, offer a reminder that racial bias exists beyond issues of funding. Even if the Board did not engage in biased spending practices, the attention that The Inquirer drew to Girard College led black activists in Philadelphia to identify a number of ways in which the school could better engage with issues of race.

Girard College is commemorating the 50th anniversary of the integration of the school in 1968 with a series of program entitled " Opening the Gates:  A Year of Discussion and Commemoration.  For more information, click here.

Civil Rights in a Northern City. “Timeline”. Available at: http://northerncity.library.temple.edu/exhibits/show/civil-rights-in-a-northern-cit/timeline

Links:
Opening the Gates: A Year of Discussion and Commemoration
Girard College