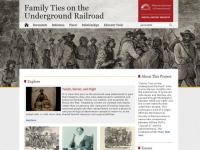 After many months of hard work, we have now completed the prototype web site for the William Still Digital History Project!

This new resource, titled "Family Ties on the Undergound Railroad," weaves together the manuscript journal and published book of William Still, who was the chairman of Philadelphia's Vigilance Committee in the mid-nineteenth century.

Check out what we've been working on:

(Because it's just a prototype and not yet a full interactive exhibit, we plan to keep the site behind a password for now.)

As we've described in past blog posts, we chose to focus this initial prototype on the experiences of three enslaved families who passed through Philadelphia in their journeys to freedom: the Shephards, the Taylors, and the Wanzers. This focus allowed us to create a manageable "proof of concept" site, while also exploring all of the complexities that we'll face when we expand the project to Still's entire volumes.

The prototype site includes transcripts and digital facsimiles from Still's works, carefully researched biographies, and other contextual annotation and materials. Thanks to our text encoding work, we also created some cool new tools to present the social networks connecting the people described in Still's works and to present geographic maps showing people's movement over time.

And even at this prototype stage, the project provides extraordinary insight into the experiences of enslaved individuals and families who passed through Philadelphia and the covert networks that aided their escape.

Thanks to Still's documentation, for instance, we know that Harriet Shephard fled enslavement in Columbia, Maryland on October 26, 1855, along with her five children, her aunt and uncle, and three young men. Their journey to freedom included a stop in Kimberton, Pennsylvania, where Harriet and her children were separated from the rest of the group to ensure their safety. Read more about Harriet Shephard (user name and password listed above).

Here's a screen grab of the social network map for the Harriet Shephard group (she's in the top left), showing all the individuals in the prototype connected to her group: 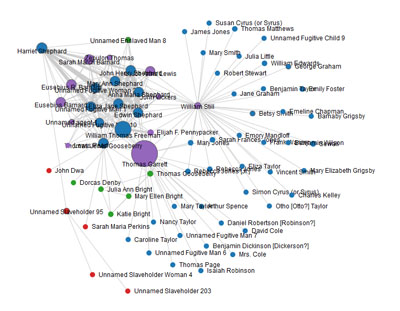 Still also documented the story of Frank Wanzer, who fled enslavement on December 24, 1855 with his fiancée, Emily Foster, his fiancée's sister and her husband, and two unidentified men. After a gunfight in Maryland (see illustration below) where the two unnamed men were captured or killed, the smaller group traveled onward, arriving in Canada in late January, 1856. Frank returned to the U.S. in July 1856 to rescue his sister and brother-in-law, and their friend. Read more about Frank Wanzer (user name and password listed above).

The Wanzer group as depicted in Still's book, The Underground Rail Road

The Taylor family is no less extraordinary. Otho (or Otto) Taylor initially fled enslavement in Clear Spring, Maryland on March 23, 1856, with his wife and children, his brother Owen and his family, and his brother Benjamin. The group had arrived safely in Canada by late May 1856, but Otho returned to the United States in March 1857 to rescue a second group of two enslaved men and one woman. Read more about Otho Taylor (user name and password listed above). 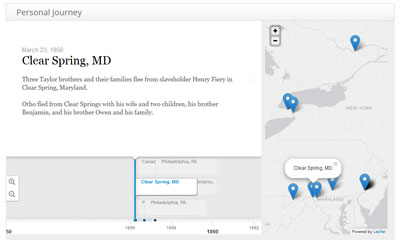 With Still’s resources interpreted and linked for the first time, even in this small "proof of concept" prototype, scholars, educators, students, genealogists, and history enthusiasts will be able to make deep connections both geographically and chronologically as they are guided through his meticulous documentation.

So with the prototype complete, what happens next?

In recent weeks, we've collected feedback on the prototype in both formal and informal settings, and we look forward to integrating this feedback into the next phase of the project. HSP is currently seeking funding to expand the project into a fully implemented site about the Underground Railroad in Philadelphia and beyond.

In the meantime, please stay tuned to this blog for updates on HSP's other innovative digital history projects, including the Historic Images, New Technologies initiative.

This is a fantastic resource and well-done website! Please be aware that Sydney Howard Gay's UGRR Journal for the years 1855-1856 is located at Columbia University in their Special Collections Library. Gay writes about the arrival of the Shephards on November 10, 1855, as well as the arrival of the rest of her group on December 3rd; he writes extensively about the Wanzer party escape (four pages with newspaper articles glued in to the journal), and their arrival in his office on January 19th (and some of his information will help fill in some of the gaps in your research and narrative), and he also notes Wanzer's return rescue mission on August 19, 1856; and the Taylor escape in early April - they arrived in Gay's office on April 7th and he writes in detail about their escape in two carriages (one of which broke down). Gay's Journal is filled with information on fugitives who fled through William Still's office, and he often includes details that Still was unable to record. Historian Eric Foner is writing a biography of Gay, and he has uncovered more information on some of the fugitives in the journal. Authors Tom Calarco and Don Papson are publishing an annotated transcript of Gay's important Journal sometime before the end of the year. I would be happy to share more information about the journal and the connections to William Still's journal entries. There is remarkable detail to be found in Gay's journal, including a 5 page entry on Harriet Tubman.

Thanks for all of this, Kate!

Just found out that some of my ancestors were involved in the undergiound railroad. Last name is bonsall

Thanks for reaching out. We are currently seeking funding to continue and expand our prototype project, and will keep an eye out for "Bonsall" when we're able to jump back into this research.

Frank Wanzer and his family are buried in Toronto and there is a very interesting grave marker.

I wanted to send you a picture of it.

Thanks for reaching out. We would certainly be interested in an image of the gravestone. (And thank you for the text of Frank's death notice, posted below.) Feel free to email me directly at ddorman (at) hsp.org.

You should coordinate with Don Papson and myself about your project. We have done some similar work with the Gay Journal, though we have not tracked the fugitives from slavery as you intend.

By the way, Don and I would like to think that we are historians too, like Eric, though not as widely known. I think our book, Secret Lives of the Underground Railroad in New York City: Sidney Howard Gay, Louis Napoleon, and the Record of Fugitives, should be a good resource for your project.

Thanks for reaching out. We look forward to checking out your book, and will keep our fingers crossed that we're able to secure more funding to expand this project further.

Note that papers in NY were asked to copy.