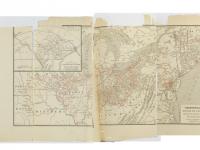 This fall we delved deeper into the interactive geographic map for the William Still Digital History Project.

The goal was to create an interactive map of important locations in selected excerpts from William Still’s Journal C and published book, The Underground Rail Road. Users could follow fugitives on their journeys northward, seeing where they fled, rested, and settled.

But in order to create this map, we first needed a master timeline of events. This timeline helps us track each person’s movements as well as each time they received some form of aid—such as clothing, medicine, or money—from an abolitionist or a member of the Vigilance Committee.

Next we needed to get the geographic coordinates for the location of each event. It sounds simple, but posed some challenges.

Some of the entries in Still’s volumes are vague. The Shephard party, he tells us, probably made it to Canada through New York. But where in Canada? When dealing with broad geographic areas we have to make an educated guess. They probably weren’t trekking all the way to the Yukon, but there’s a good chance they made it to Toronto, which received more fugitives from the Underground Railroad than any other city in Canada.

Then, there are times when Still mentions a specific place, but the location is unclear to modern readers. Abolitionist Grace Anna Lewis, for example, housed the Shephard party for a night. Several sources mention that she lived west of Kimberton, but they are not more specific than that.

Occasionally Still writes about a specific place whose location is actually known. He records the sale of Owen Taylor’s first wife and child at the Baltimore Slave Market, which was one section of a large downtown market. Not only do we know the approximate size of the market—3 square city blocks—but we know exactly which streets demarcated the Slave Market.

Still also writes about the Longwood Meetinghouse in Kennett Square, PA. This Friends meetinghouse was a center of radical anti-slavery sentiment and sometimes housed fugitives for weeks at a time. It is still standing across the street from the entrance to Longwood Gardens.

Another building that still stands is Thomas Garrett's house in Wilmington, DE. This house is all that is left of the Garrett family homestead known as “Thornfield.” At Thornfield, Garrett served as an Underground Railroad station master for over forty years where he helped an estimated 2,700 fugitives escape to freedom.

We are currently working with our web developers to put all this information into interactive maps and timelines, which users will be able to use to track the movements of an individual or see the relative importance of a particular location. The master map will include the important locations for all three family groups and is one of the key components in telling the stories of these families.