The following article was written by HSP volunteer Randi Kamine and is being posted on her behalf. Many thanks to Archival Processor Megan Evans for helping prepare these articles for publication. To read the first part of this article, please click here or on the article's title in the right sidebar.

Almost two years later, in a letter dated April 11, 1767, Benjamin Franklin was still writing to John Ross about the “Change of Government in the Proprietary Colonies.” Things were not going well. Franklin found sympathy for the cause from men “of Weight,” but with controversies concerning British rule occurring in New York and Boston, “nothing is so little interesting to them as our Application” to go forward. In fact, although by 1763 several colonies surrendered their charters and became royal colonies, Pennsylvania remained a proprietary colony until the American Revolution. 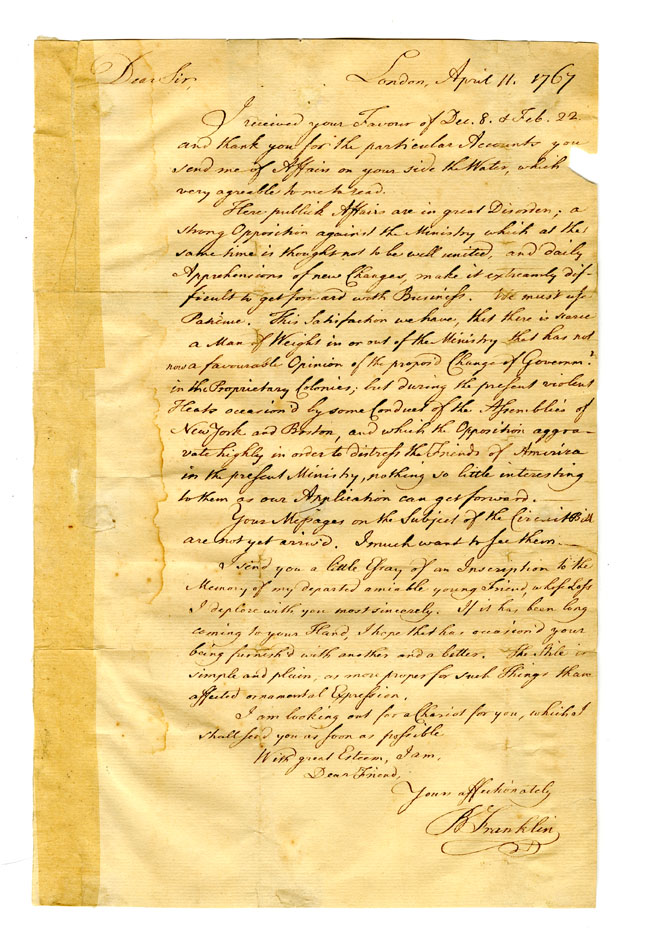 The sentence in the letter mentioning the “Subject of the Circuit Bill,” refers to a bill that would require judges of the Supreme Court to ride circuit in the counties more often. Under the existing laws, the judges rode the circuit too infrequently – causing many trials to be transferred to the Philadelphia courts. This was inconvenient to litigants and the juries. Ross, a prominent attorney in Philadelphia, would be well read on the latest news of this nature.

Unfortunately, the “little Essay of an Inscription to the Memory of my departed amiable young Friend” referred to in the fourth paragraph of the third letter is not included in the Read family letters (Collection 0537). However, a transcription of the eulogy can be found on the American Philosophical Society website. Apparently, it was sent along with the letter. It reads:

In Memory of Margaret,
Daughter of John and [Elizabeth] Ross
Who deceased [August 20] 1766
Aged 19 Years
Lamented by all that knew her
For all that knew her lov’d her
The Delight of her Parents & Relations
Innocence & Sweetness of Manner Sincerity
Benevolence of Heart
Render’d her

The interjection of such a personal response to his friend’s daughter’s death shows warmth that is not apparent in the other three letters found in the Read collection.

The fourth, and longest, letter, dated May 14, 1768, once again has Franklin lamenting the trouble in western Pennsylvania and the lack of success in his attempt to make Pennsylvania a Royal colony. He comes close to admitting defeat when he writes, “I have urged over and over the Necessity of the Change we desire; but this Country itself being at present in a Situation very little better, weakens our argument that a Royal Government would be better managed and safer to live under than that of a Proprietary.” One of Franklin’s most famous quotes was written in this letter. Commenting on the “disorders on our [Pennsylvania’s] Frontiers,” as well as “lawless Riot and Confusion” in London, he writes of “a People who are ungratefully abusing the best Constitution and the best King any Nation was ever blest with.” 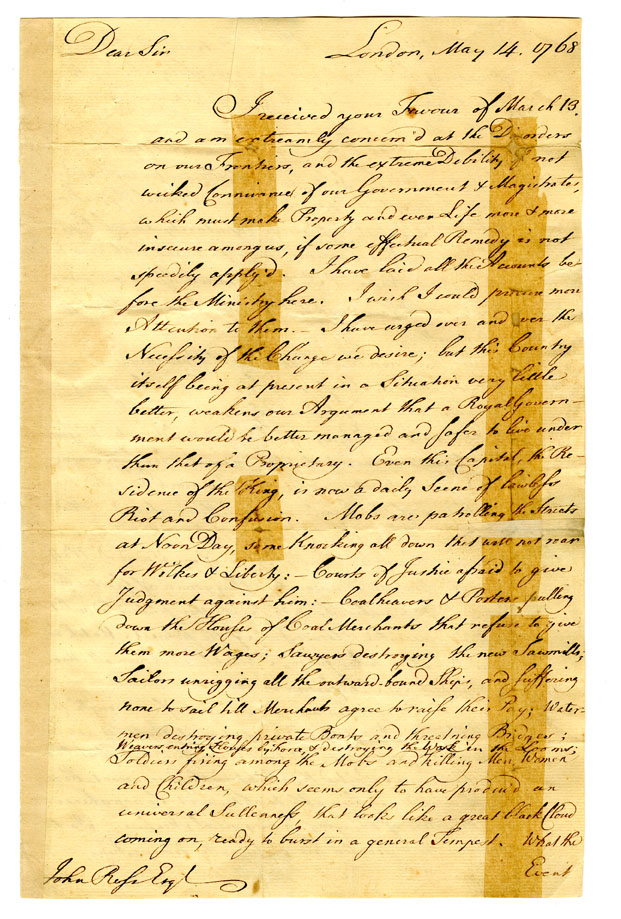 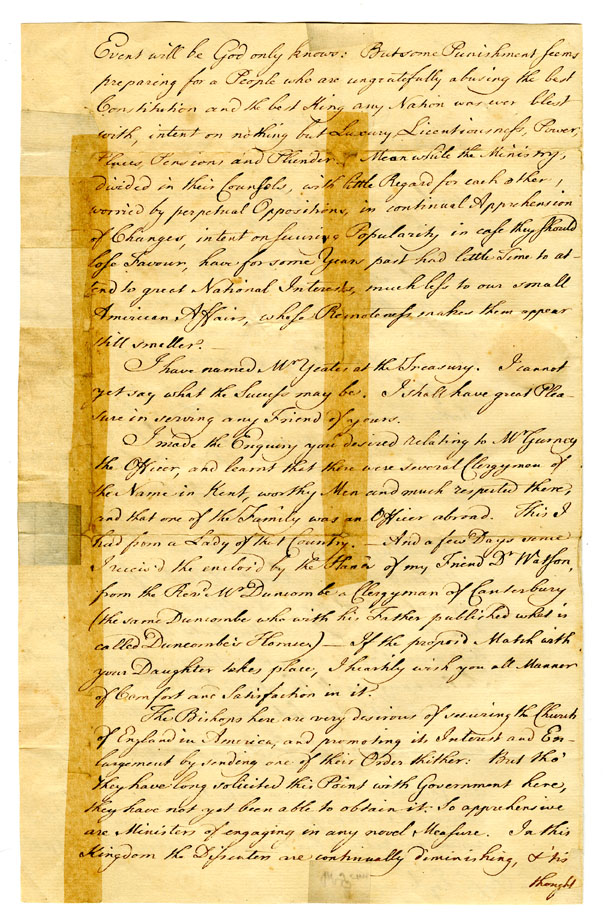 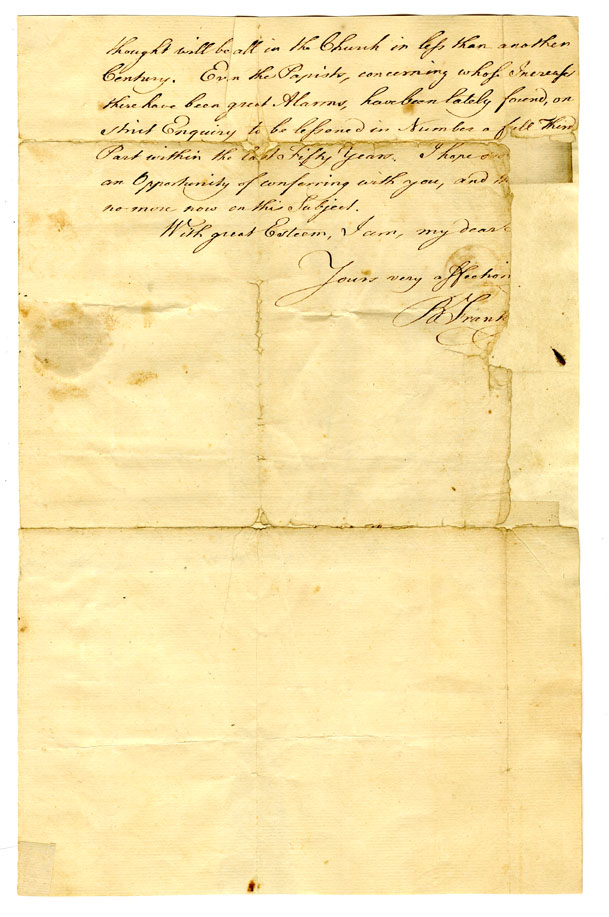 Franklin tells Ross about the efforts that the Church of England (the Anglican Church) was making to establish itself in America. Throughout much of the seventeenth century, the Church suffered from a slow rate of growth and a shortage of clergymen in the colonies. By 1768 there had been some growth of Anglican congregations along the Atlantic seaboard, the largest concentration being in the South. In southern colonies, the Anglican Church was actually the established, state-supported church, as it was in England. In Philadelphia, Christ Church was founded in 1695 by members of the Church of England. The main building of the church was constructed by 1744, twenty-four years before this letter was written. It stands today at Second and Market Streets. Nonetheless, as Franklin notes, the colonies were having a hard time getting ministers to come over to serve the colonies, “So apprehensive are Ministers of engaging in any novel Measure.”

Franklin was ready to do his friend a good turn. In this forth letter he informs Ross that he has “named Mr. Yeates at the Treasury.” John Yeates was married to Ross’s sister. And in his reference to “Mr. Gurney the Officer,” he is letting Ross know that he made inquiries about a young man who wished to marry his daughter Catherine.

To be sure, the reader of these four letters learns something about Benjamin Franklin. But just as significantly, these letters give insight into the political, cultural, and religious events surrounding Philadelphia in the 1760s. The Historical Society is a great place to explore the life and times of Ben Franklin and colonial Philadelphia. And one never knows when a surprise document may come to the fore.

It’s true that many documents mentioned in this essay can be read online.  I posit, however, that it is enlightening to read original or contemporaneous documents.  Seeing the handwriting of the author, or a transcript printed shortly after an event, gives the reader a sharper sense of the time the document was written. And for some of us, it’s just plain fun.

HSP documents at the Library Company of Philadelphia (LCP):

For information on the Proprietary party v. the Quaker party:

Hunt, Isaac. Looking-glass for Presbyterians: or a brief examination of their loyalty, merit and other qualifications for government…, Philadelphia: Armbruster, 1764. Call number: HSP in LCP/AM 1764 Hun Ar64 L87.

Williamson, Hugh. The Plain-dealer or a few remarks upon Quaker-politicks, and their attempts to change the government of Pennsylvania:…, Philadelphia: A. Stewart, 1764. Call number: Rare/AM 1764 Wil.66 984.0.1.

For information on Franklin’s letters:

The Papers of Benjamin Franklin Project at Yale University. http://franklinpapers.yale.edu

The National Archives: Founders Online: http://founders.archives.gov/documents/Franklin/01-12-02-0083 [This site is very helpful in interpreting Benjamin Franklin’s letters. It is easily searchable and includes letters written to and from Franklin.]

For information on gout at the time of the letters: