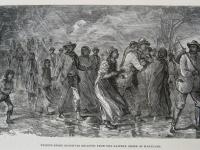 We historians know the power of a name. Names are assertions, claims to participation in a world which cherishes the deep meanings imbedded within them. Historians, like you and like me, must often speak, however, of those whose names are lost to our own imperfect historical record. We do our best to articulate the ways in which these individuals possessed power and influenced the past but, too often, we fall short due to a simple lack of either written or verbal documentation about their lives. Rarely, we find a source that enables us to find names for the anonymous.

The Historical Society of Pennsylvania's latest digital history project on William Still and the Underground Railroad is, in many ways, about naming and claiming. A case in point: one of my first contributions to the project was to write the biography of "Anonymous Young Man 1." Admittedly, approaching the task as a scholar of Native Americans in early America, I was skeptical: I am not particularly used to having sources which allow me to find names—let alone pen full biographies—for the "anonymous." Herein, though, lies the power of William Still's writings and of HSP's work: the digital history project combines the meticulousness of the HSP project leaders' work with the passionate detail of Still's own narrative and record-keeping and it produces, in part, names. And not just any names. This project pushes beyond the stories of Frederick Douglass, Harriet Tubman, and William Still and it brings to life people like S. Bivans, Harriet Shepherd, Benjamin Johnson, and, yes, even "Anonymous Young Man 1." With further funding, the project will shed new light on 2,000 or so other individuals mentioned in Still’s writings.

Along his journey, “Anonymous Young Man 1” and his party reportedly traveled "looking as innocent as if they were going to meeting to hear an old-fashioned Southern sermon." Still's narrative focus remains squarely upon the Shepherd family; the five anonymous travelers fall from the story. Still tells of the Shepherd family's successful escape to southeastern Pennsylvania: we encounter Thomas Garrett, a prominent abolitionist and agent of the Underground Railroad and we journey with the Shepherds to Norristown where we learn that they must be divided in order to travel safely northward to Canada. It is unclear how the group divided. Our "anonymous" was difficult to track.

In an entirely different section of the more than 400-page journal, Still mentions a Thomas Gooseberry Jr., a young man who traveled from Maryland with "the eleven." This seemingly simple statement, it turned out, proved the key to revealing Anonymous's identity: “Anonymous Young Man 1,” we discovered, was Thomas. We then learned that he had a father named Tom and three sisters named Julia Ann, Mary Ellen, and Katie, and, in order to take a chance for freedom, he had to leave them behind with what was probably a potent blend of fear, excitement, sadness, and resolve.

He did more, though, than flee slavery. He staked a claim. He asserted, with his name, that he was more than chattel—indeed, he declared that he was not property at all. Nor was he merely one of "five of this class" determined to "visit Canada." He had a name. He had a family. And he must have said so, because William Still copied the seemingly simple word "Thomas," along with a line or two more, into his journal. With its digital history project, HSP has renewed Thomas's claim.

As a historian, this is the kind of work that's thrilling; the thousands of people like Thomas, the young man formerly known as "Anonymous," are what make HSP's work so exciting. HSP's prototype project includes more than 275 people that are mentioned in Still's writings (some are mentioned only once in passing, some with frequency). With further funding, HSP plans to expand the project to more than 2,000 people included in Still’s works. The project members are researching, writing, and encoding biographies, creating digital networking maps to show individuals' relationships with one another, and, perhaps most importantly of all, they are resurrecting the names and claims of those who boldly offered their stories to William Still nearly one hundred sixty years ago.

The names in the HSP database are symbolic of lives. The people who lived those lives staked their claim to participation in the world of names when they escaped the bounds of slavery, asserted their humanity, and performed the seemingly simple act of offering William Still the gift of their names. The Historical Society of Pennsylvania's William Still digital history project, then, ensures that Thomas's name and his story, along with those of many others, are known to all who seek them out.

This is an amazingly important project! For those on your research team, you may want to check out Sydney Howard Gay's UGRR Journal (Columbia University.) Gay was an UGRR agent, worked in the Anti-Slavery Office in NY City and was editor of the National Anti-Slavery Standard. His surviving Journal covers 1855 and 1856. Some of the people forwarded by William Still ended up in Gay's office, and they were often aided by Gay's co-partner, Lewis Napoleon. The five other people with Harriet Shepard and her family are listed in Gay's Journal: John Bright, Shephard's brother, who was also enslaved by Shepard's enslaver (John Dewar or Dwar); Thomas Castle (ie, Thomas Jervis according to Still, and father's name Goosberry), who was enslaved by Sam Perkins of Chestertown, MD; Ezekiel Chambers, also enslaved by Dewar and he may be Shepard's brother as well; John Bright's unnamed wife, enslaved by a Karl Swingle?; and another unnamed woman, also enslaved by Dewar. The Maryland State Archives has additional information about Shepard, as well as thousands of runaway advertisements that can be searched to match names with Still's Journal C. Both Gay's and Still's journal provide incredible detail about the UGRR network from the greater Chesapeake region to New England and New York. Best regards,
Kate Clifford Larson

Thank you so much for these leads! This is wonderful help as we work to uncover more information about the people that Still interviewed. And we look forward to making more of these kinds of connections as our project progresses.

I am one of what is probably very few people who have read William Still's "Underground Railroad" cover to cover. While long and in some ways a bit repetitive, it is a wonderful collection of determination, risk, caring and hope. I am thrilled to learn that it is being put to the use it deserves.

It pains me to say this, buy my genealogical research has shown that one of my ancestors, a farmer in Kent County Delaware, owned seven slaves. The most egregious part of this shows up on the 1830 census where one of those slaves is identified as male and "over age 100." What I wouldn't give to restore his name to the record and give him some dignity.