Highlights from the HINT Project

Highlights from the HINT Project 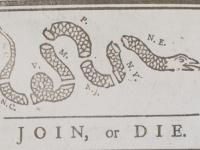 In a few short weeks we’ll be wrapping up work on the Historic Images, New Technologies (HINT) Project. While working on the two year project, we’ve come across many interesting and funny political cartoons.

One of our favorites is Join, or Die. It was published by Benjamin Franklin in the Pennsylvania Gazette, and is most likely the first American political cartoon. The cartoon shows a snake cut into eight pieces and makes the point that the colonies must unite in order to defend themselves against tyranny. 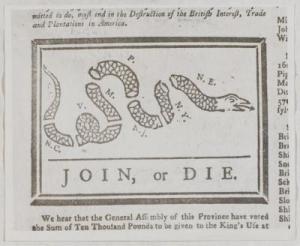 Another hysterical cartoon is Ten Little Anarchists which was published in 1887 in Puck, the famous American humor magazine. In the cartoon each of the ten little anarchists are killed, captured, jailed, or taken away one by one until none remain. The fifth vignette of the cartoon is my favorite, and illustrates how the sixth anarchists met his unfortunate demise. It reads: “six little Anarchists, meeting in a dive, One talked himself to death, and then there were five.” 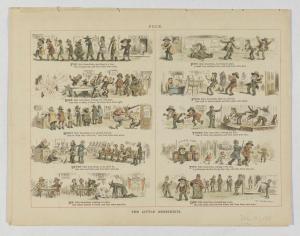 In the cartoon below, Another Bombardment.-The Newspaper Fleet Firing on the Bedouins in Washington , a fleet of newspaper editors in paper gunboats are armed with ink, pens, and cannons. They surround and attack a fort secured by a group of  Washington politicians flying a "plunder" flag. 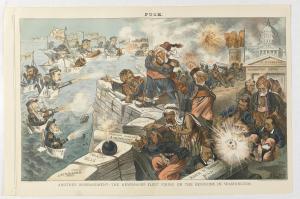 Another Bombardment. -- The Newspaper Fleet Firing on the Bedouins in Washington, 1882, Balch Broadsides: Satirical Cartoons (PG278)

The political cartoon, The Siege of Zion 1787, reminds us of a hellish scene from Dante’s Inferno. In the image, "Zion," which in this cartoon represents the 1776 Constitution of Pennsylvania, is located atop a mountain guarded by figures holding banners labeled "Franklin & Liberty." Devils, witches, satyrs, and mythical beasts attack “Zion” and climb the mountain. 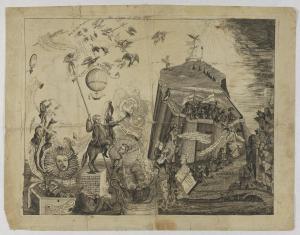 And lastly, one our favorite HINT cartoonists is Joseph Keppler (1838-1894) who published the humor magazine Puck. He drew a number of “puzzle” cartoons which we discussed in a previous blog post entitled “Hidden Faces”  http://hsp.org/blogs/fondly-pennsylvania/hidden-faces. In the cartoon below, “An Unpleasant Ride through the Presidential Haunted Forest,” Keppler hid the faces of over 20 presidential hopefuls in the landscape, rocks, and trees. Can you spot all the hidden faces? 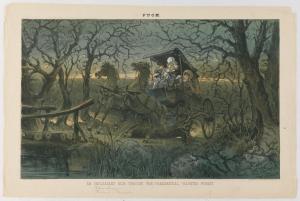 We hope you've enjoyed exploring some of our favorite political cartoons. And remember to check out our digital exhibit, Politics in Graphic Detail, when it becomes available later this year!