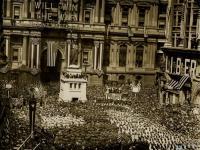 History is a mystery, especially for events that occurred more than 100 years ago.  With no one around who was a witness, the evidence is often sketchy at best.  A newspaper article, a photograph, a letter – each piece only whets the appetite by offering a tantalizing clue.

Historians, like real life Sherlock Holmeses, search out all the evidence they can find and then apply their honed skills of reasoning to create an interpretation of what happened. Even then, they don’t always have all the right information – and they may come to incorrect conclusions.

One example is the mystery of what happened to a statue built for the Liberty Loan parades in Philadelphia during World War I.  In preparing materials for a program, I was looking at photographs in the Historical Society of Pennsylvania’s (HSP) Philadelphia War Photograph Committee collection. Liberty Loans were bonds sold to individuals by the U.S. Treasury to fund the War, rather than raising taxes. Parades helped to promote the sales through whipping up patriotic fervor. I noticed in photographs of a parade on South Broad Street in 1917 that there was a very large Statue of Liberty next to City Hall.

It certainly is not there now, so where did it go?

My interest piqued, I began an internet search. I read up on Liberty Loan parades in HSP’s collections, including the finding aid to the South Philadelphia Women’s Liberty Loan Committee Records. And then I went to newspapers of the day and looked for articles and photographs, figuring something so large would have occasioned mention. I also wrote to curators of local art museums and searched sculpture databases for Philadelphia.

I did learn something about the statue: It was unveiled on April 16, 1917 and sculpted by Max Voight, a German immigrant. It stood 51 feet high with the base, about one-third the height of the “real” Statue of Library. The choice of Voight as sculptor echoed the poem on the Statue’s base welcoming immigrants and showed how German Americans stood with their new home in the war movement. I even found a patent for Voight’s design, but I could not discover more information about Voight, despite going to genealogy sources.

In browsing more photographs from the War Committee Collection, I saw the Statue of Liberty one more time – this time in front of Independence Hall in 1919. The occasion was a homecoming parade for the 18th Infantry Division. But the case has gone cold. No source mentions and no living person knows where the sculpture went after that final parade nearly 100 years ago.

On February 23, come to HSP to learn about another Philadelphia history mystery. Like Christopher Boone and the letters in The Curious Incident of the Dog in the Night-Time or me with World War I photographs, try your hand at searching historical documents and piecing together a true, but forgotten, story.