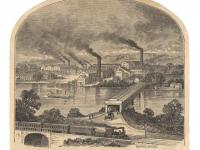 "Fracking Means Jobs"; "New Well Severance Tax Would Stifle Job Growth and Economic Benefits of Pennsylvania's Energy Development"; "Methane Emissions from Oil and Gas Sector Found to be Much Greater Than Expected." What newspaper reader in Pennsylvania today hasn't regularly encountered such headlines? From developing new pipelines and cracker plants that break down petrochemical and fracking residue to defining standards for the allowable toxicity of fluids used or created in the conversion of shale into natural gas, Pennsylvania remains one of the nation's hot spots for energy development as it continues its historical practice of extraction and expansion into other forms of energy.

For more than a century, fossil fuels have defined the lives of every American, and few states have contributed more to this bounty than Pennsylvania. The commonwealth’s diverse energy resources have been repeatedly connected to markets and converted into power and commodities. Pennsylvania has been a place where innovators attempted pioneering techniques and developed new technologies. Although its energy history has exerted a significant toll on Pennsylvania’s environment and citizens, it has also enabled the state to lead the nation into and through the industrial age. Today, as yet another energy frontier emerges—natural gas mined from shale—investigating ways that various energy forms were developed in Pennsylvania is especially compelling. Thus, a special issue of Pennsylvnia Magazine of History and Biography on Energy in Pennsylvania is timely.

The special issue offers some historical context for our gas boom as well as for other energy opportunities that will emerge in the 21st century. The flexible nature with which energy winds its way through everyday human life has inspired the editors to choose essays that represent various stops on the lifecycle of energy use. Frederick Quivik examines Philadelphia’s Point Breeze Petroleum Refinery and storage site to reveal the tensions between oil production and hazards to humans and the environment. Louis Carlat and Daniel Weeks show how Thomas Edison and his managers and partners approached technological, structural, financial, and human barriers to bring electrification to residents of towns in middle Pennsylvania in the late 19th century. Joel Tarr and Karen Clay find early natural gas development in Pittsburgh a precursor for much of what we see unfolding today, though the experiences and environmental consequences of 19th- and early 20th-century gas drilling have been largely ignored by today’s producers and regulators.

A review essay by Brian Black, Ann Greene, and Marcy Ladson surveys exciting new literature on energy history while noting opportunities for further investigation. Allen Dietrich-Ward provides a review of recent books in the field. Finally, the “Hidden Gems” spotlight energy sources such as wood, charcoal, water, and coal that were critical to colonial Pennsylvanians and its early industrialists. The gems also point to some of energy’s cultural dimensions, be it in singular creations of models of automobile America or in ideas about abundance that supported profligate use of the region’s vast sylvan lands.

Whether it is gathered from turbines atop our ridges or layers of shale buried deep below, there can be little doubt that energy will continue to play an important role in life in Pennsylvania. While the historical stories are full of personal drama and fascinating technical innovations, the true imperative for historians derives from the need for us to draw from past patterns and practices to inform this current and future development. We hope this special issue contributes to an informed energy future in the commonwealth.

BRIAN C. BLACK is professor of history and environmental studies at Penn State Altoona, where he currently serves as head of arts and humanities. He is the author of several books, including Petrolia: The Landscape of America’s First Oil Boom (Johns Hopkins, 2003) and Crude Reality: Petroleum in World History (Rowman & Littlefield, 2014) and edited Nature’s Entrepôt: Philadelphia’s Urban Sphere and its Environmental Thresholds (University of Pittsburgh, 2012), and Climate Change, a four-volume encyclopedia (ABC-Clio, 2012), among other titles. He is the author of the Energy and Society book series with West Virginia University Press.

DONNA J. RILLING is associate professor of history at the State University of New York at Stony Brook, where she focuses on the history of the early American republic. She completed her doctoral work at the University of Pennsylvania and is author of Making Houses, Crafting Capitalism: Builders in Philadelphia, 1790–1850 (University of Pennsylvania Press, 2001). Her current book project examines the metamorphosis of a waterway in 19th-century Philadelphia that was at the heart of political, social, and environmental conflict.