An earlier blog post gave a brief introduction of the Oliver H. Bair Company collection, which is now properly preserved and accessible to users at HSP. This collection is comprised of nearly 83,000 burial records that span the time of 1920 to 1980. There were many surprises within these records, and this post is going to highlight some of the most interesting people that were located within these records. Going into this project I did not give much thought about what kind of historical information I would be dealing with, but as the saying goes you never know what you will find until you actually go looking. Never before would I have associated baseball, Mother’s Day, and department stores together, but after processing the Oliver H. Bair collection I found a link between the three, and as you read on you’ll find that link too.

During a staff meeting I was informed that I should be on the lookout for two names that might appear in the collection. These names were Anna Marie Jarvis and Cornelius McGillicuddy. At the time I, along with my colleagues did not recognize either name, however one staff member asked the question “Isn’t McGillicuddy also known as Connie Mack?” That name rang a proverbial bell in my head (I am a baseball fan) and with those names fresh in my head I continued processing the collection. I first located the burial record of Anna Marie Jarvis, and once I did I conducted some research about her, and was very intrigued by what I found. 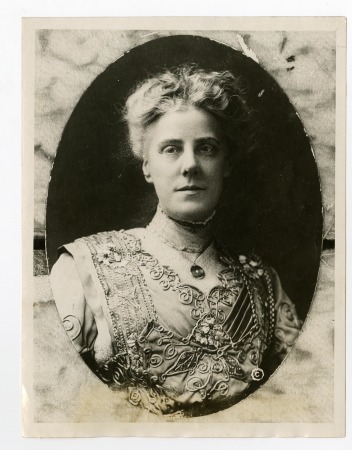 Anna Marie Jarvis was born in Webster, West Virginia, on May 1, 1864, and her mother was Ann Maria Reeves Jarvis. Ann Jarvis had established Mothers’ Day Work Clubs in multiple cities in an effort to improve sanitation conditions and to give basic medical aid to soldiers of the Civil War. Anna was greatly inspired by her mother’s work, and two years after her mother’s death in 1907 Anna held a memorial service in honor of her mother and vowed to make Mother’s Day a national holiday. The holiday was officially recognized in 1914, however within five years Anna was fighting the very holiday she helped create. Anna was unhappy with how the holiday had become commercialized, and detested the idea of only sending a greeting card and candy to a mother. She along with her sister Ellsinore spent the rest of their lives campaigning against Mother’s Day, which included once being arrested for disturbing the peace. The campaigning took all of the Jarvis’ resources, and Anna died penniless in West Chester, Pennsylvania, on November 24, 1948. She was buried on November 27, 1948, and she never married or had any children. The record of Anna Jarvis contained multiple newspaper clippings about her death, and demonstrated the tragic nature of her story as she had created something to honor a woman she admired so much, only to spend the rest of her life fighting the commercialization that, in her mind, corrupted the idea of the holiday.

The story of Anna Marie Jarvis is a tragic one, the second name I was given however, provided a bit more uplifting material. Cornelius McGillicuddy, more famously known as Connie Mack, managed the Philadelphia Athletics professional baseball team from their inception in 1901 to 1950. During his tenure the Athletics went 3,582-3,914 and won five World Series, while appearing in eight overall. As of 2012 the Athletics ballclub is located in Oakland, California, and moved to their current locatio 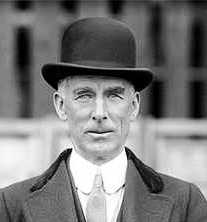 n in 1968, after they spent twelve years in Kansas City following their move from Philadelphia in 1954. The Athletics participated in the American League, while their cross-town rival Philadelphia Phillies played in the National League. Mack is recognized as the longest-serving manager in Major League Baseball history, and in 1937 was inducted to the Baseball Hall of Fame. His accomplishments were not only as a manager, as he played professional baseball for eleven years and spent multiple seasons on the Washington Senators and Pittsburgh Pirates roster. Mack was one of the most revered figures in baseball during his time, and due to his long tenure and success as manager of the Athletics, the stadium in which they played, Shibe Park was re-named Connie Mack Stadium in 1953 until its demolition in 1976. Mack died on February 8, 1956, and was buried on February 11, 1956. Connie Mack’s burial record can be found in the Oliver H. Bair collection, and while it does not contain the same amount of information as Anna Marie Jarvis’ records did, his record nonetheless opened up a door for myself to further learn about a sport that I enjoyed and participated in as a child.

The two previously mentioned names were names I knew about and were looking for in the collection, and while interesting and informational the fact that I knew about them took the surprise out of locating them. This was not the case with a final noteworthy person that I discovered in the collection. While processing records of March, 1950 I noticed the name Ellis Gimbel. The last name sounded familiar as Gimbels was a large department store chain, and the envelope containing Gimbel’s records was thick and filled with newspaper clippings. Upon investigating the articles and conducting an internet search I realized that I had located the burial records of Ellis Gimbel, former Chairman of the Boards for Gimbel Brothers, Inc. Gimbels was renowned for being a highly innovative and impressive department store chain that maintained stores in many 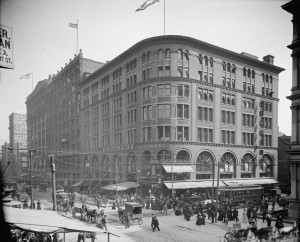 of the United States most noteworthy cities, including Philadelphia, New York City, Miami, Chicago, Detroit, and Beverly Hills. Ellis Gimbel was the owner of the department store in Philadelphia, and is also credited as holding the first ever Thanksgiving Day parade in Philadelphia. In 1920 Gimbel wanted to entice shoppers to visit the toy section of Gimbel’s department store so he sent fifty of his employees to perform and parade down the streets of Philly. This was the beginning of a Thanksgiving Day tradition that continues to this day. Gimbel passed away on March 17, 1950 and was buried two days later on March 19, 1950. As previously mentioned Gimbel’s burial record is filled with newspaper clippings covering his death, and the amount of press covering his death demonstrates his notoriety and displays the affection for him amongst the people of Philadelphia. Sometimes researchers will talk of an “Ah ha!” moment, which is when they locate something that ties their entire research/project together, or a piece of history that is just too interesting to pass-up. This was my “Ah ha!” moment, as I essentially stumbled upon the records of one of the most influential people in the early twentieth century, and I was not only able to learn something from the records, but I was also able to share it with others, and everyone benefitted from the information.

At the beginning of the blog I mentioned that I never would have linked Mother’s Day, baseball and department stores together, but thanks to the Oliver H. Bair collection, I found the connection, and benefitted from the information that presented itself, both as planned and by surprise. An old saying goes you never know what you will find unless you look, and in this case I found much more than I was bargaining for!