Of Wanamakers and Romanovs: A History Mystery from the Archives

Printer-friendly version
Home › Blogs › Fondly, Pennsylvania › Of Wanamakers and Romanovs: A History Mystery from the Archives

Of Wanamakers and Romanovs: A History Mystery from the Archives 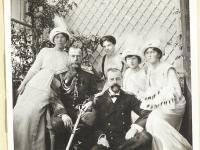 During the course of the Howard Lewis Project in our Archives department, the John Wanamaker collection [2188] received some much-needed attention in order to make the collection more accessible and easier to use for our researchers. As one of our larger collections (approximately 190 feet of material) that documents a very prominent Philadelphia citizen and the store he founded, the collection sees a great deal of use in our research library. It was determined that one of the things we could do to make the collection easier to use would be to take a detailed inventory of all the volumes in the collection and number them consecutively. Previously, the volumes had been numbered rather confusingly and were further obscured by the fact that some were housed in boxes with other materials and not listed separately in the finding aid. All volumes were removed from the boxes (except where they were fragile and in need of extra support) and given labels with their new numbers and titles that accurately reflect their contents.

It was in the course of these tasks that I began to notice that some of these volumes were very poorly or confusingly described. I realized that researchers looking at the finding aid (since the collection is located in our closed stacks and not directly accessible to our patrons) would likely have no idea as to their contents or any indication that they could be potentially useful. One of the most interesting results of this re-labeling of volumes was the discovery (or re-discovery) of material within the collection, especially former volume 20-24. On the shelf, this volume was labeled as “20-24 Mary Brown Wanamaker Europe trip, 1909.” The finding aid description was only slightly more helpful: “Scrapbooks and photo albums: Mary Brown Wanamaker: photo album, European Trip, 1909.” Seems fairly lackluster, right? Based on these titles, one could only surmise that the album contained photographs that maybe depicted members of the Wanamaker family somewhere in Europe. As with the other scrapbooks and albums, I had to open up the volume and sift through its contents to get a more specific and accurate title. 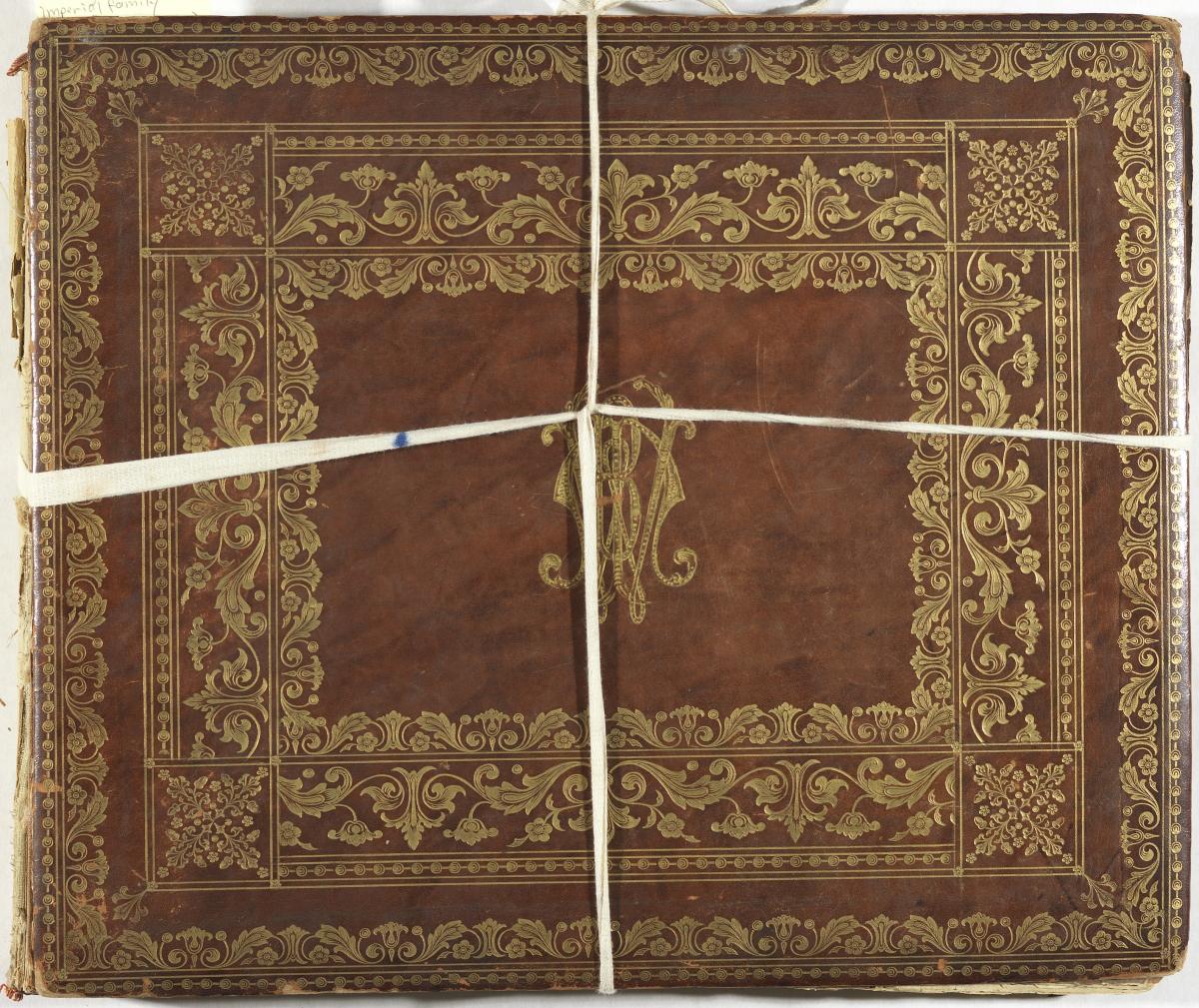 It became obvious fairly quickly, thanks to the captions under the photographs, that this album was not assembled by John Wanamaker’s wife, Mary Brown Wanamaker, but rather by his daughter, also named Mary Brown but known as “Minnie” and who had married Major Barclay Warburton in 1895. The album features Minnie, her husband, and her three children, as well as her mother and other unidentified family members and travelling companions. As I reached the end of the album however, I surprisingly began to see some very familiar faces: 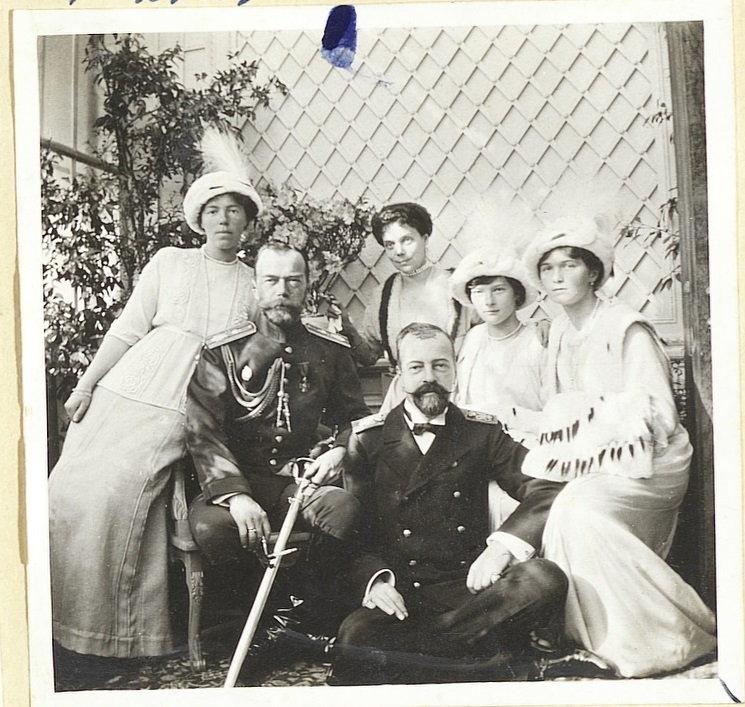 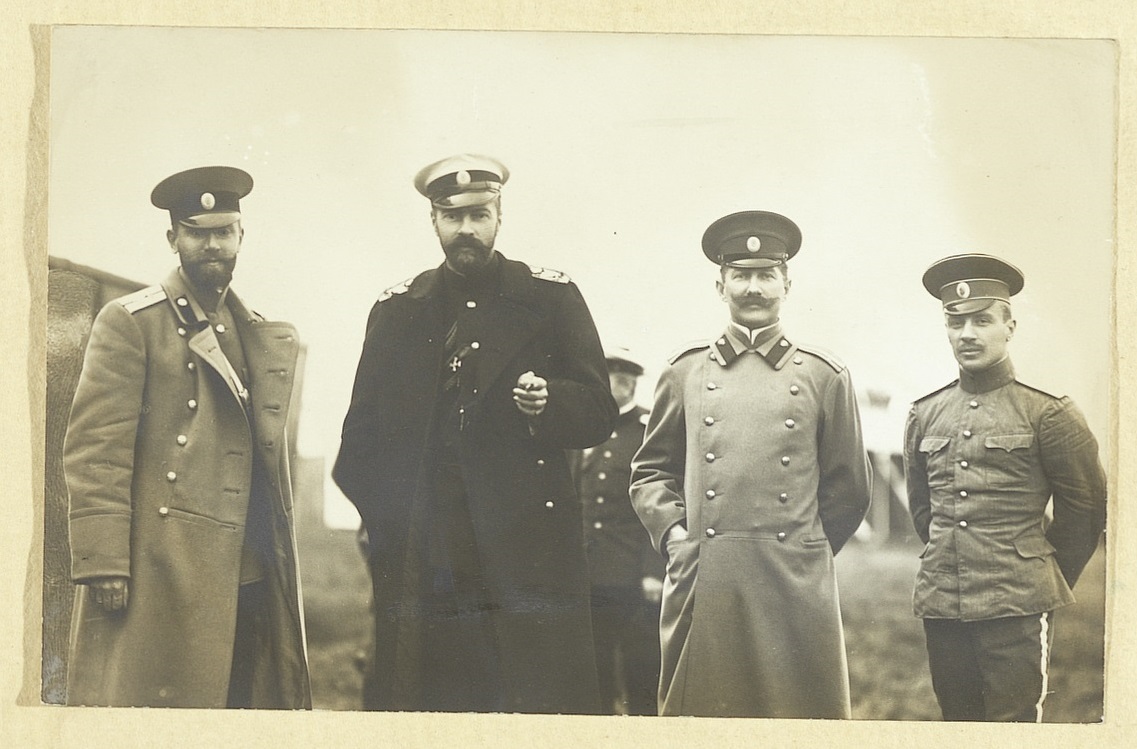 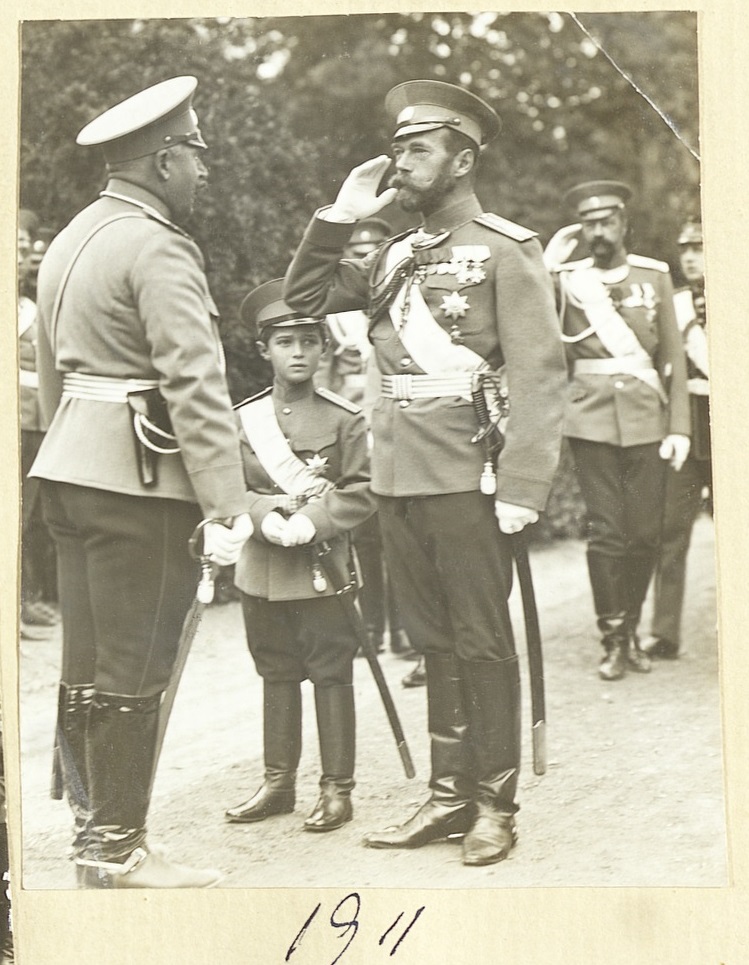 For students of history, those faces should be quite familiar since they often appear in textbooks and scholarly works around the world.

My initial reaction was to assume that these images were clipped from newspapers or magazines. But closer inspection revealed that they were authentic.  First, many of the photographs are quite informal and are not of the sort that would have been published in the media at that time due to strict rules of etiquette. Second, Minnie Wanamaker Warburton and her husband Barclay appear in several photographs with members of the tsar’s extended family. And third, one of the photographs of Grand Duchess Xenia and her daughter, Princess Irina appear to be authentically autographed.

Assuming all of the above to be true, the only question remaining was: why in the world would the daughter of a Philadelphia department store magnate have such photographs in her possession?

It is known that both the Wanamakers and members of the Romanov family owned property in the south of France at Biarritz however, the true answer may lie in the relationship with one member of the imperial family in particular. 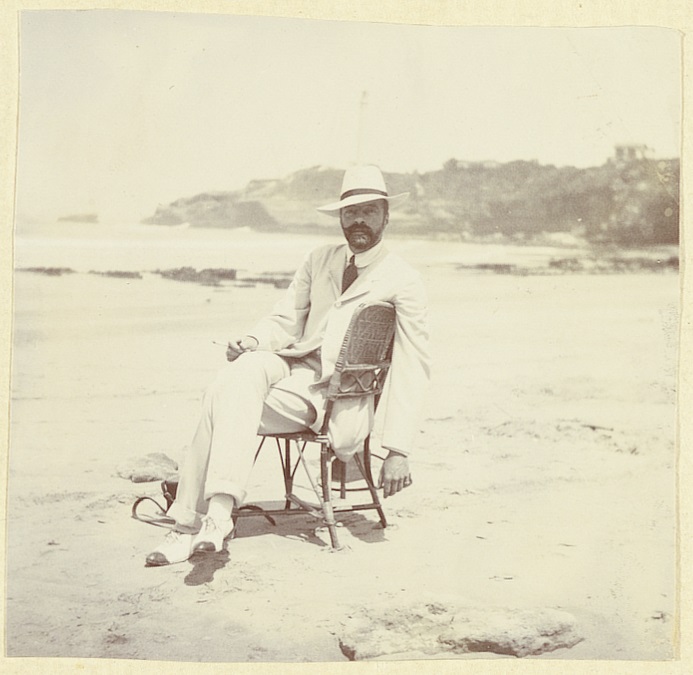 It is Grand Duke Alexander Mikhailovich, brother-in-law and second cousin to Tsar Nicholas, who appears over and over again in the album. Alexander was married to the tsar’s sister, Grand Duchess Xenia, and served as an admiral in the Imperial Navy as well as an advisor to the throne.

Sometime before 1913, the Grand Duke appears to have made the acquaintance of Major Warburton, either through military circles or through close proximity while vacationing in Biarritz. An article from the New York Tribune dated September 4, 1914 discloses the following:

“Of late years Mr. Warburton has interested himself in the sale of the Lewis automatic gun, the invention of an American officer. This gun and other war material he has sold to the Russian government. He is well known in Russia, and is the personal friend of Grand Duke Alexander, who, on his visit to America last summer, was Mr. Warburton’s guest.”

There are very few materials relating to Minnie and Barclay Warburton in our Wanamaker collection, none of which seem to provide any additional information about their international connections or activities while abroad. 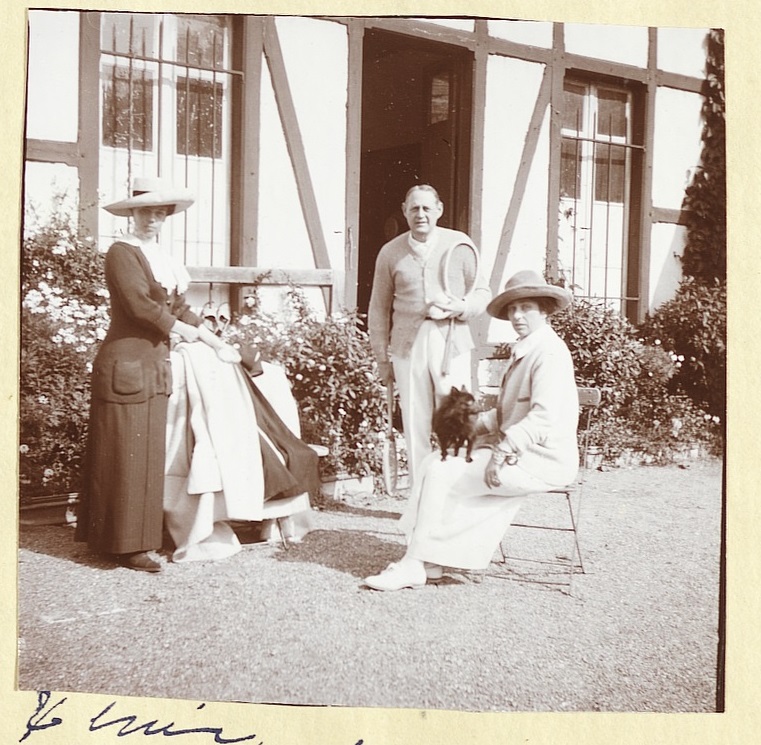 The last dated photograph in the album depicting Grand Duke Alexander and members of the imperial family is from 1914, an ominous date for those who know that World War I began in that year and would bring with it the eventual bloody overthrow of the tsarist regime. Alexander, his wife, and seven children were some of the lucky few members of the Tsar’s inner circle to escape Russia with their lives. They were placed under house arrest at their estate in Crimea by the Bolsheviks for over a year until the German occupation of Yalta freed them (Alexander’s niece was married to Kaiser Wilhelm’s son and heir, the Crown Prince). Several months later, after the armistice was declared and the Germans were forced to evacuate Russian territory, the family was rescued by the British Navy (thanks again to their extended family connections since Alexander’s mother-in-law, the Dowager Tsarina, was the aunt of King George V) and escaped the Bolsheviks for good.

Grand Duke Alexander made his way to the peace talks then taking place at Versailles, in the hopes of gaining support for the anti-communist forces in Russia as well as initiating the rescue of members of the imperial family still threatened by the communist regime. While his pleas ultimately fell on deaf ears, he may have had the chance to be reunited with Barclay Warburton who was serving as a military attaché with the American delegation.

Afterwards, the family split up with Alexander settling in the south of France while Xenia and most of their children settled in England (living on the charity of George V) or immigrated to America. With the loss of his social and political stationnot to mention most of his money, the former grand duke took up amateur archaeology and became a prolific author in his later years. I was unable to find any evidence that he maintained his relationship with the Warburtons of Philadelphia after the end of the war, although it is certainly possible that they stayed in touch. 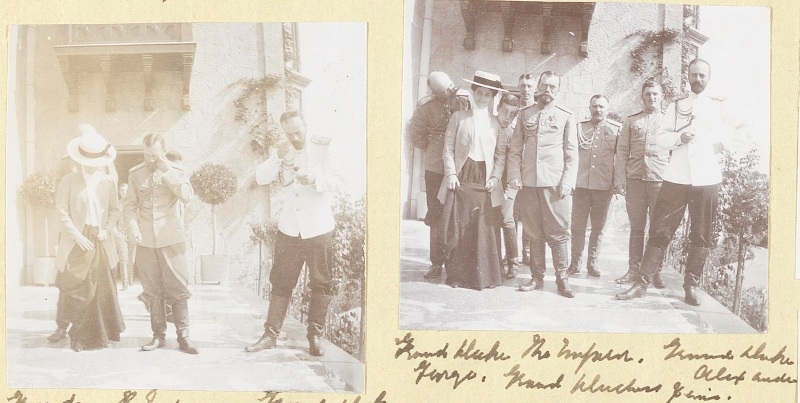 And so this tantalizing piece of evidence from the Wanamaker collection remains shrouded in mystery, for now. There is still a great wealth of material within the collection to comb through that perhaps may shed some light on the rest of the story. But without the benefits of archival processing, arrangement, and description this obscure connection might have remained hidden for many more years. Additional processing of the collection, accompanied by use from researchers, may very well one day uncover more information.