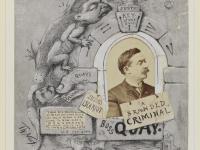 The artistry on display in the political cartoons of the HINT project is breathtaking at times. Now that we HINT project associates are up to our elbows in encoding—carefully considering the details of each cartoon, transcribing every word, trying to identify every important person, organization, or symbol in the image, and doing our best to explain its message—the hard work the artists put into composing these often very complicated images is more and more apparent. How did they do it?

One unique document in the Historical Society of Pennsylvania’s collections, “The Silence of Matt Quay,” helps provide a few clues. 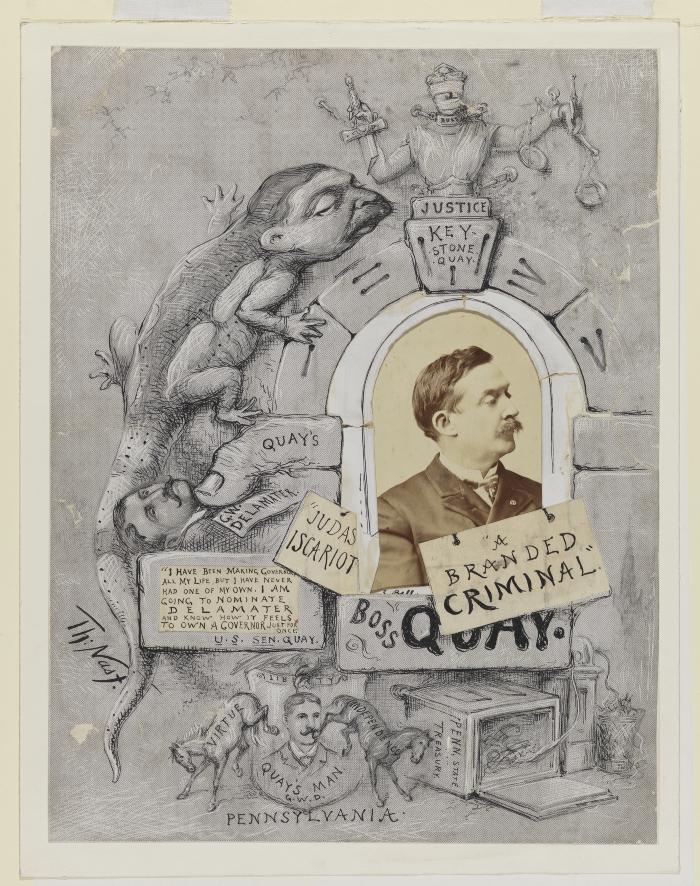 My colleague Sarah Newhouse and I were elated several months ago to come across original cartoon artwork by legendary political cartoonist Thomas Nast. This wasn't just another copy of a widely reproduced print—this was a hand-assembled, mixed-media composition bearing Nast’s original ink-strokes. While the bulk of the artwork consists of Nast’s pen-and-ink drawings on a gray-shaded, foam-like board, the image is a collage: the gray board has a cut-out opening framing a photograph of Pennsylvania political “kingmaker” Matthew S. Quay and another layer of white board, and there are several small pieces of thin paper, on which text has been inked, pasted on or over details of the scene. The entire composition consists of at least 4 layers of different material, meaning that this cartoon draft has a 3-D quality that is lost in reproduced printings. 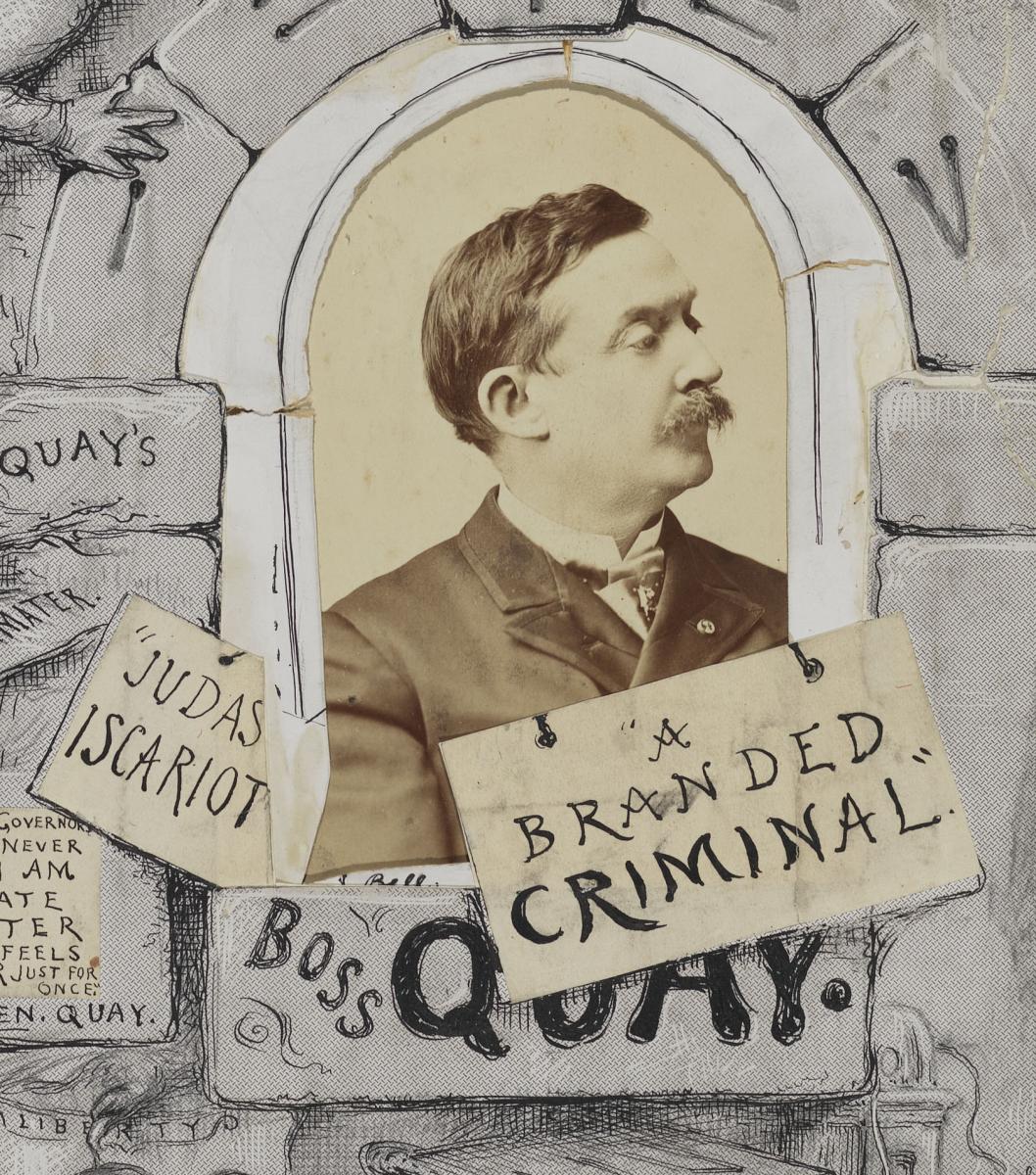 A note on the back of the image, written on June 11, 1958, provides a little more detail on the image’s meaning, and how it was prepared:

Original Nast political cartoon
Drawn on a prepared benday(?) background
Inspired by his famous Boss Tweed conception of the 1870's. Tweed in true reptilian shape looks benignly down from his border perch upon his legitimate spiritual offspring “Boss” Quay.

The Ben-Day dots printing process dates from 1879, and so would have been an innovative technique in 1890, when this image was created. Named after printer Benjamin Day, it involves printing small colored dots in various hues and spacings to create shade and color effects. The gray board on which most of Nast’s pen and ink work is drawn is shaded with such dots.

“The Silence of Matt Quay” was eventually printed as the cover of the October 25, 1890, issue of The Illustrated American. 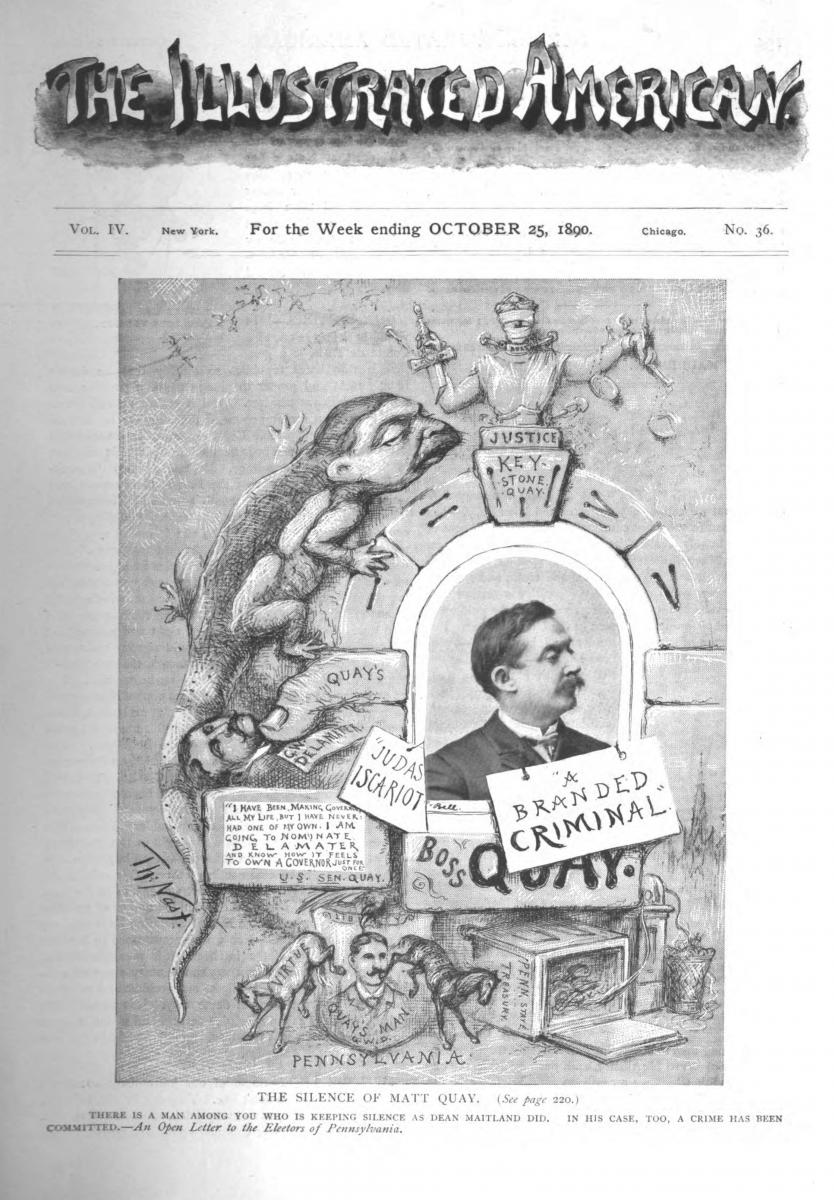 Inside this issue of the magazine is a story, titled “The Silence of Matt Quay: An Open Letter to the Electors of Pennsylvania,” featuring more accompanying illustrations by Nast. For those who are interested in reading this “powerful romance,” volume 4 of the Illustrated American is available in various places online, including Google Books.

The enhanced features of the HSP Image Viewer, including powerful zoom, pan, and rotate tools, will allow users to investigate and appreciate the details of complex compositions, such as this original Nast artwork. We’re looking forward to publishing this fabulous 3-D find on our exhibit website.