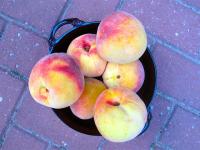 Ever since I heard that my family’s farm had begun selling Chambersburg peaches a few weeks ago, I have been craving summer peaches like crazy!  Many hot summer days working Pittsburgh-area Duda farmstands as a college student were greatly improved by easy access to these peaches.   I’ll admit that more then a few customers caught me with juice rolling down to my elbows when daily business had slowed down— and I will add that my uncles are smiling at my confession now since they know this is advertising at its finest!  When I came across a 1910 Franklin County Charity Benefit Cookbook to raise money for the Chambersburg Hospital, Children’s Aid Society of Franklin County, and local home for the elderly, I immediately thought of Chambersburg peaches!  This historic cookbook’s recipe for peach ice cream ended up pulling me into Pennsylvania peach history where I was not only impressed with the economic significance of the fruit detailed in two agricultural extension bulletins from 1896 and 1913, but also discovered it's ties to the Civil War."  Dip into a brief history of Pennsylvania peaches below and in the additional images in the photo album to the right!

Brush up on your Peach History 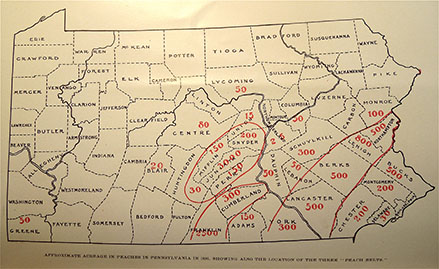 1896 map of peach-growing regions in Pennsylvania published by the Penn Sate Experiment Station (Butz, 2) You can view a larger version of this map in the photo album attached to this blog.

Throughout the second half of the 19th century, favorable soil and weather conditions sparked the growth of peach production in central and southeastern Pennsylvania and you can see from the map above that a sizable peach industry was already well-established by the turn of the 20th century.  In the early 1900s, it was common for state governments to fund agricultural extension programs who spread information about modern farming methods and technology to the agricultural community and the Historical Society of Pennsylvania has two state extension bulletins about peach production published during this time.  The map above was published in an 1896 extension bulletin that grouped production into three peach belts in the Juniata, South Mountain, and Southeastern growing regions.  Estimating that nearly 2 million peach trees were planted in the state at the time, adding up to roughly 11,000 acres in peach orchards, the bulletin argues that the industry was both substantial and sustainable in Pennsylvania over the long term.  A later extension bulletin from 1914 lists 40 varieties of peaches being planted in America at the time, 7-10 of which were well-suited to agricultural conditions in Pennsylvania.  Together, these bulletins simultaneously recognize the peach industry as a substantial and promising part of the state economy and encourage agriculturalists to take advantage of modern farming knowledge and techniques in caring for their orchards.

Ties to the Civil War 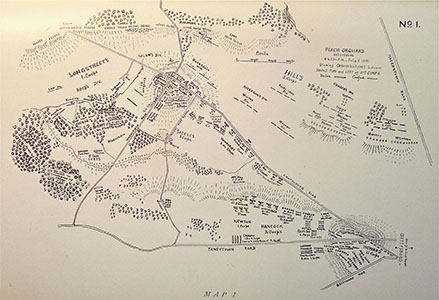 1910 map of the Battle of Gettysburg.  In the top right corner, you can see where combat took place in the peach orchard opposite of the Round Tops in the bottom left corner.  You can view a larger version of this map in the photo album listed at the top of this blog.

To readers rolling their eyes at my suggestion that peaches hold a significant place in Pennsylvania history, you will be surprised to know that a Pennsylvania peach orchard played an important role in a key battle of the Civil War.  The map above is from John Bigelow’s “The Peach Orchard, Gettysburg: An Appeal with Supplement,” which details the combat that took place on a local peach orchard during the Battle of Gettysburg, primarily on July 2, 1863.  Though Federal troops were harshly exposed to Confederate fire in this location, maintaining position at the peach orchard was an important defense for the (Northern) Army of the Potomac.  Allowing the enemy to take the orchard would have provided Confederate troops with great opportunity to break through Federal lines in the combat at the Round Tops.  Above, you can see the Peach Orchard (top right corner) opposite Little and Big Round Top (bottom left corner).  A total of 1,334 Federal and 1,047 Confederate troops were lost in combat at the orchard. 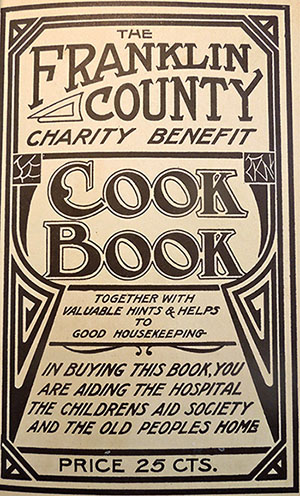 The peaches that I am most familiar with are from Chambersburg, PA, which happens to be in Franklin County where this Charity Benefit Cookbook, pictured above, originated in 1910.  At 25 cents a copy, proceeds from the book went to the Chambersburg Hospital, Children’s Aid Society of Franklin County, and local home for the elderly.  The contents was not was not limited to recipes alone, but also contained local advertisements and tidbits of advice about how to perform daily household chores like fixing squeaking shoes, what to eat, or even advice on "How to Live a Hundred Years!"

I found the perfect peaches to try out the cookbook’s “Peach Ice Cream” recipe when I ran over to the Fair Food Farmstand at Reading Terminal Market earlier this week and picked out a bunch of peaches from Beechwood Orchards.   Located in Biglerville, PA,  Beechwood Orchards is located in Franklin County, lies in the South Mountain Peach Belt, and is roughly 11 miles north of the historic Peach Orchard at Gettysburg.  The 1910 ice cream recipe I sourced from the Franklin County Charity Cookbook is only a brief 2 lines: “2 pints of milk, 1 pint of cream, 2 teacups of sugar, 1 pint mashed peaches.  Mix and freeze.”  Mashing the peaches by hand and mixing the ingredients together, I poured the contents into a large tupperware container and popped it in the freezer overnight.  Sounds simple enough right?

I only investigated the important role that churning plays in making ice cream, when I was met a solid frozen brick which I had expected to be a creamy frozen treat the next morning.  A Google search revealed that an ice cream maker is an important tool to use when making ice cream because it aerates the liquid before it is frozen, preventing the formation of ice crystals in the mixture.  The end result after proper churning is fluffy, user-friendly ice cream rather then the frozen concoction that I naively turned out by quickly throwing the ingredients together and freezing them.

Not to worry, making the ice cream was not a waste!  A few seconds in the microwave has been my solution to the problem of over-freezing, though I would highly recommend that you churn the ice cream if you test out this recipe yourself.  More importantly, the cookbook that the recipe came from drew me into a history of Pennsylvania peaches that turned out to be a more rewarding culinary exploration then my actual ventures in the kitchen. 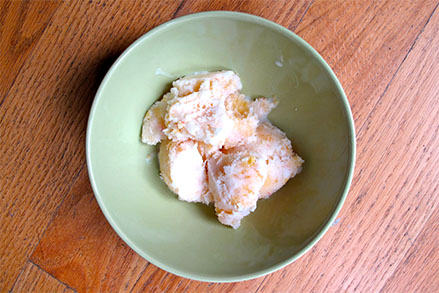 Have you had an oh-no moment when using an old family recipe in the kitchen? What happened and how did you recover?

Stay tuned for another food-filled blog next week! There are only two more articles left in this series A Philly Foodie Explores Local History.