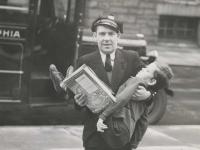 Polio
by Daniel J. Wilson
This article was published in the spring 2019 issue of Pennsylvania Legacies (vol. 19, no 1): Epidemics and Public Health in Pennsylvania History.
In the hot summer of 1916, a frightening new disease appeared across Pennsylvania. Young children developed a high fever accompanied by vomiting and diarrhea. Many soon recovered, but a growing number developed muscle weakness, fell while trying to walk, or had increasing difficulty breathing. When muscle paralysis set in, doctors were able to diagnose another instance of infantile paralysis, a disease newly epidemic in the United States. Infantile paralysis, or poliomyelitis, was an intestinal virus that in a small percentage of cases invaded the spinal cord, causing permanent muscle paralysis and even death.
Polio, as infantile paralysis came to be known in the 20th century, has a significant place in the history of Pennsylvania. The commonwealth was hit hard in the large 1916 polio epidemic that affected the northeastern United States. When Dr. Jonas Salk established a virology laboratory at the University of Pittsburgh in 1947, Pennsylvania soon became a major center of research on the poliovirus that led to the first successful vaccine against the disease in 1955.
Pennsylvania was also where Salk first tested his vaccine, first on institutionalized children and then on schoolchildren in the Pittsburgh area. Polio has continued to impact Pennsylvania as many polio survivors experience the new disabilities of post-polio syndrome and as Sanofi Pasteur, a drug company in Swiftwater, manufactures much of the vaccine currently used in the worldwide campaign to eradicate the disease. Thus, Pennsylvania has both experienced the ravages of this widely feared childhood illness and participated in the science that set it on the road to extinction. 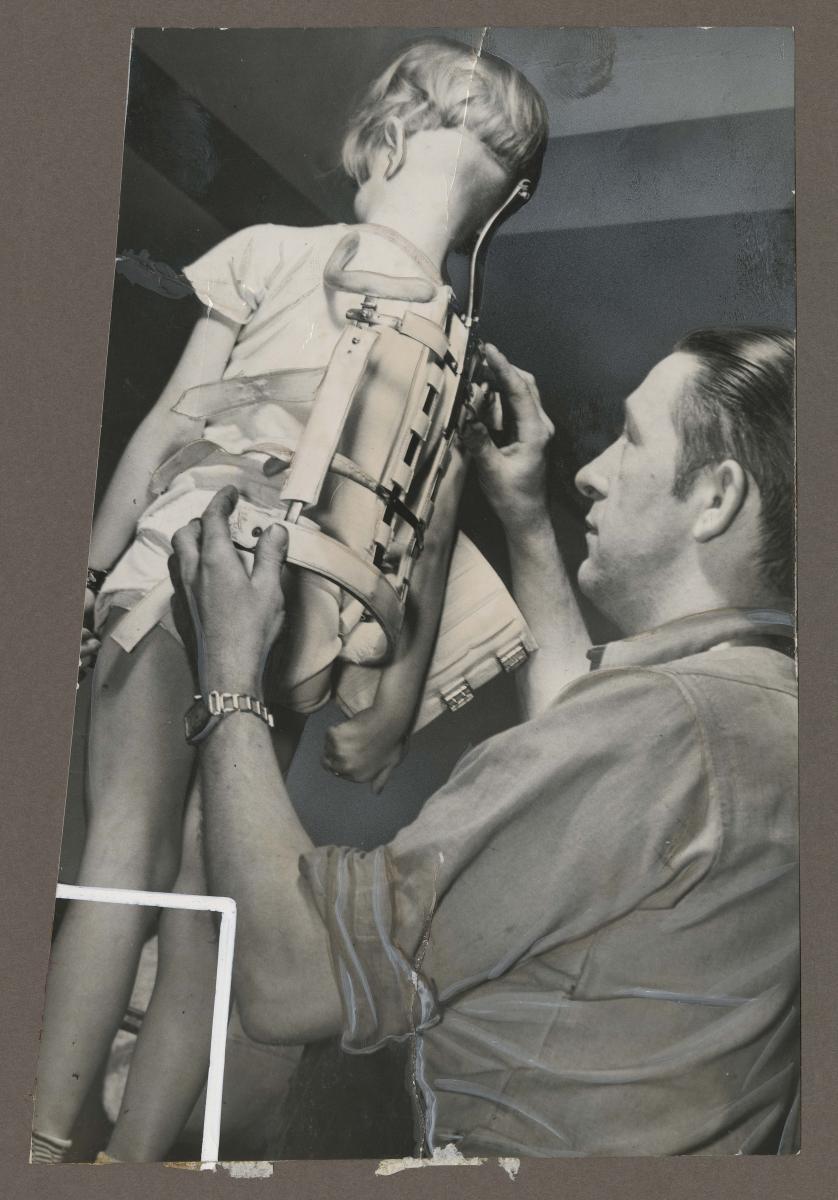 Bracemaker Lewis Darby fits a brace on Betty, a polio patient at the Shriner’s Hospital for Crippled Children in Philadelphia, Feb. 5, 1939. Philadelphia Record Photograph Morgue.
Polio, or poliomyelitis as it is more formally known, is an old disease that became epidemic in the early 20th century, paradoxically as a result of improved sanitation. The poliovirus is an intestinal virus that is shed in fecal material. In conditions of poor sanitation, the poliovirus circulates continually, and children are infected early in life, when they are still protected by maternal antibodies. They then safely build their own antibodies, which protect them against later infection. With early-20th-century sanitation advancements, the circulation of the virus was interrupted, and children were not infected until later in life. The later one is infected, the more likely the disease is to cause the characteristic paralysis.
The 1916 polio epidemic was one of the largest in the United States and the largest in the world to that date. Centered in the northeast, particularly New York, the epidemic produced 27,000 cases and 6,000 deaths in 26 states. The actual number of infections must have been much higher, since we now know that only about 3 percent of infections result in paralysis. Pennsylvania’s 2,181 cases ranked third behind New York’s 13,223 and New Jersey’s 4,055. The disease spread across Pennsylvania, but Philadelphia experienced the largest number of cases: 1,006, with 307 resulting in death. Polio typically struck during the warmer months of summer, and the epidemic in Pennsylvania followed that pattern. There were only three cases in May 1916, but the number had risen to 120 by July. In August the number jumped to 747, and September saw the most cases with 804. By October, the number had fallen to 379, and in December, there were only 26. 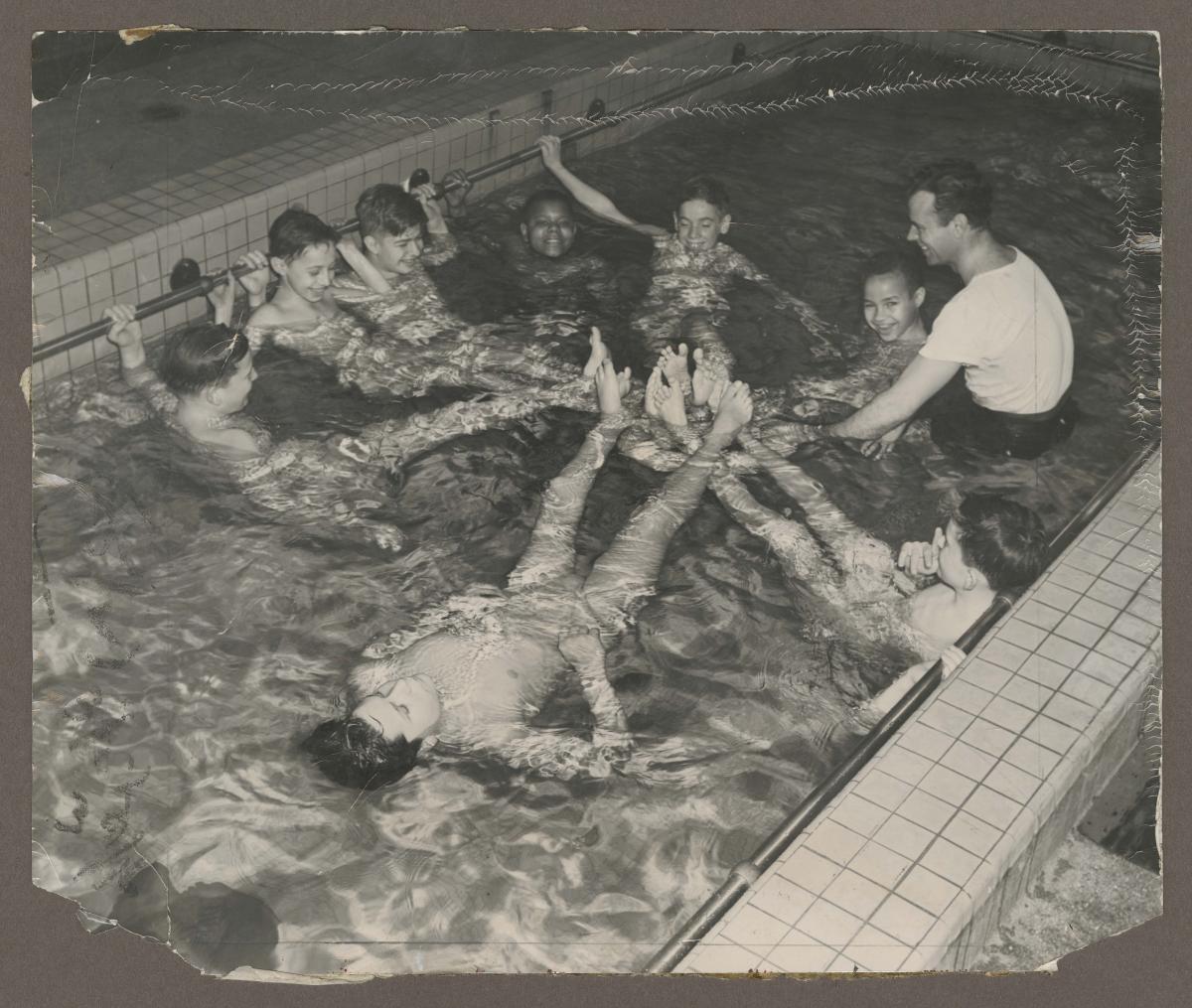 Boys play in the heated pool of the J. Willis and Elizabeth Martin Orthopedic School, Jan. 5, 1941. Philadelphia Record Photograph Morgue.
Polio was a new and frightening disease in 1916. Doctors could diagnose it once paralysis appeared, but they could do nothing to prevent the disease or to stop the progression of paralysis. Poliovirus causes paralysis when it invades the spinal cord and destroys or damages anterior horn cells that are part of the system of motor neurons. Paralysis could affect any of the body’s muscles, but most typically affected those in the legs. If the muscles that controlled breathing were paralyzed, however, patients died because there were no effective means of artificial ventilation in 1916.
Public health officials responded to the epidemic by quarantining and isolating afflicted patients and their families. Children from poor families were often sent to isolation hospitals over the strenuous opposition of parents who feared they would die. In late August, the state health commissioner closed the schools until September 18. Some communities tried to prevent children from epidemic areas from entering their borders. However, since doctors in 1916 did not understand how the disease was transmitted, these measures were largely ineffective in preventing polio’s spread. The epidemic ended only with the onset of cooler weather in the fall. In the years that followed, the incidence of polio receded to a much lower level. 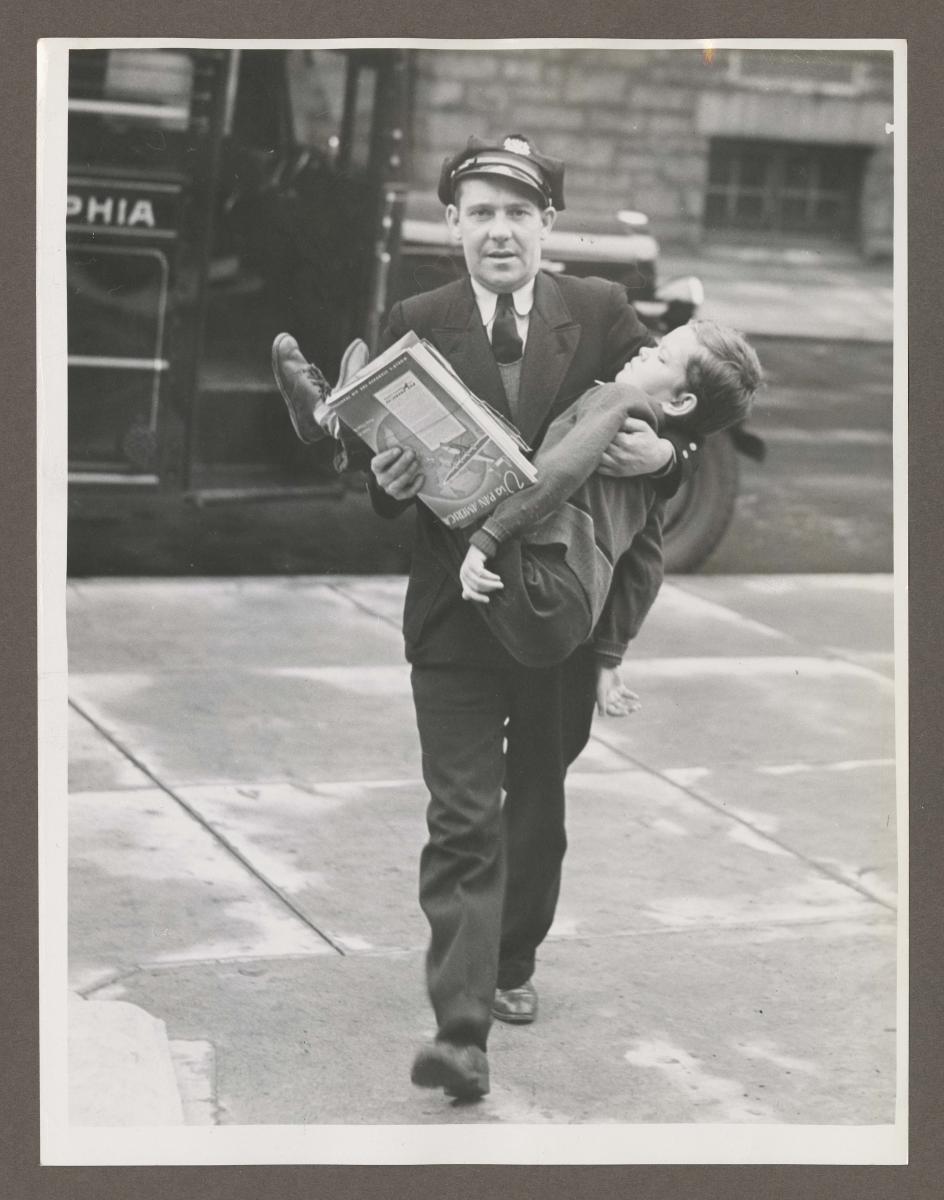 A Philadelphia school bus driver carries a boy who is unable to walk to the entryway of the J. Willis and Elizabeth Martin Orthopedic School, the first school in Philadelphia for children with physical disabilities, circa 1937. Philadelphia Record Photograph Morgue.
The history of polio in Pennsylvania took an important turn in 1947, when Jonas Salk, a young doctor and scientist at the University of Michigan, arrived at the University of Pittsburgh to establish a new laboratory for the study of viruses. Salk had spent several years studying the influenza virus under the direction of Dr. Thomas Francis. He had learned techniques for developing a “killed virus” vaccine, including how to use formaldehyde to kill the virus, how to add chemicals to increase the effectiveness of the vaccine, and how to run large-scale tests of new vaccines. Salk’s new laboratory was partially funded by a grant from the National Foundation for Infantile Paralysis (NFIP), better known as the March of Dimes, to establish a virus research program. Salk proposed to study influenza, but he also decided to investigate the poliovirus at least in part to continue to receive funding from the March of Dimes. 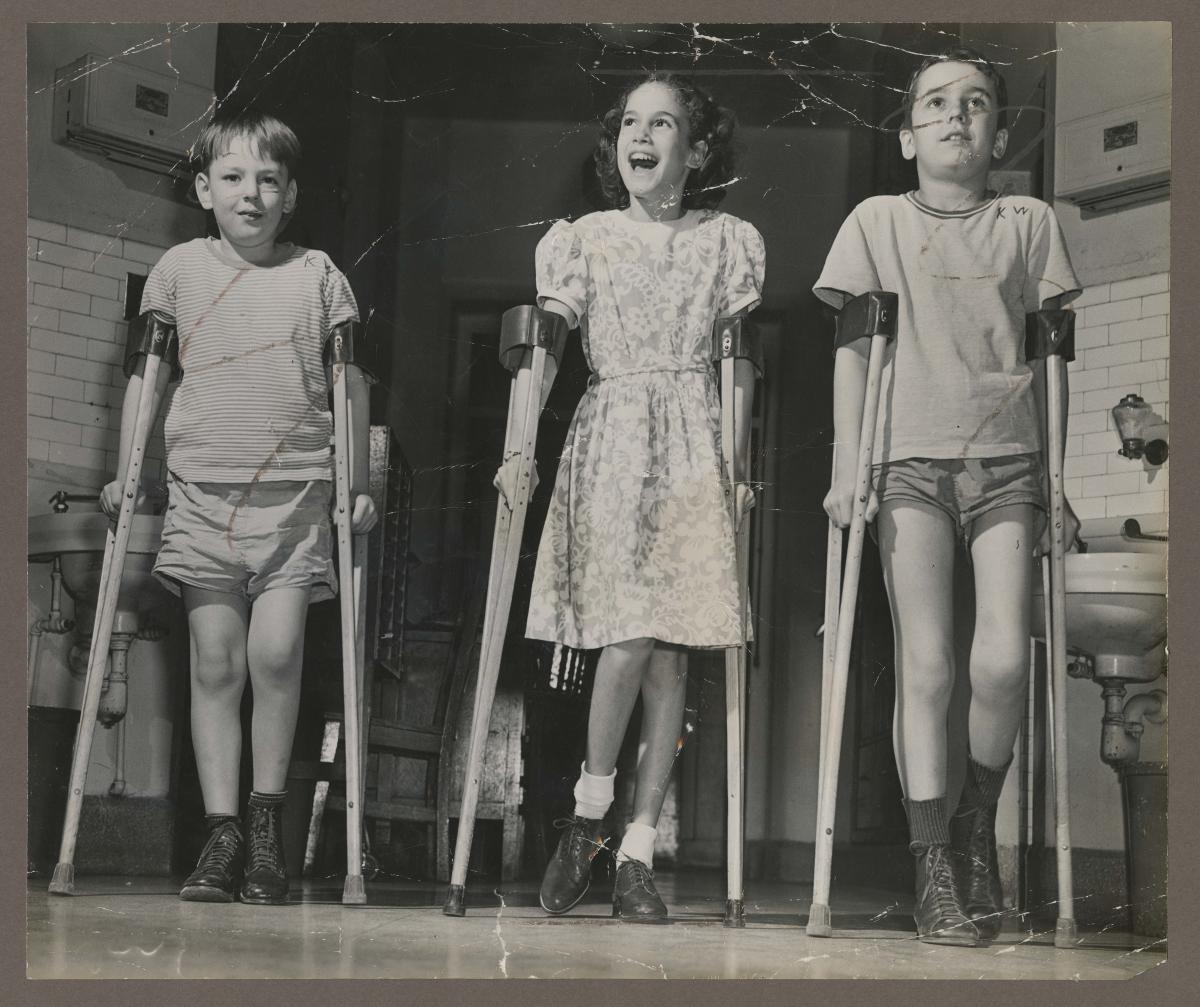 Children recovering from polio at Children’s Hospital of Philadelphia practice walking with crutches, Jan. 4, 1946. Photo by Edward Ellis. Philadelphia Record Photograph Morgue.
One of the great unknowns in 1947 was how many strains of the poliovirus existed. Scientists needed to know this number in order to create a vaccine that protected against all strains. This was painstaking, detailed work, but Salk eagerly enlisted his laboratory. The typing program ran from 1949 to 1951 and revealed that there were only three strains of the virus, which would make creating a vaccine much easier. A second crucial step was taken when John Enders and his laboratory at Harvard discovered how to grow the poliovirus on non-nervous tissue—in this case, monkey kidney tissue. Large amounts of the virus would be needed to create a vaccine to protect millions.

“Help me win my victory,” asks a girl recovering from polio in this 1942 poster for the Celebration of the President’s Birthday for the National Foundation of Infantile Paralysis (March of Dimes). President Franklin Delano Roosevelt contracted polio in 1921. Historical Society of Pennsylvania War Posters Collection.
Even while working on the typing program, Salk’s laboratory had begun to experiment with developing a polio vaccine using the techniques Salk had learned at Michigan. By 1951, aided by a major grant from the March of Dimes, Salk turned full-time to growing large quantities of virus with which to experiment. The challenge was to kill the virus so it could not cause polio but would still prompt the vaccine recipient’s immune system to develop antibodies against wild poliovirus. Salk and his team had to choose the strains to inactivate and then find the ideal process to kill the virus without destroying its capacity to immunize. By late 1951, Salk received permission from Basil O’Connor, the head of the March of Dimes, to test the experimental vaccine produced in his laboratory on humans.
At this point, Salk needed experimental subjects. He approached the directors of two Pennsylvania institutions—the D. T. Watson Home for Crippled Children in Sewickley and the Polk State School in Venango County, an institution for children with intellectual disabilities. At the Watson Home, Salk obtained consent to experiment from many of the parents of the patients. All of the “volunteers” at Watson had had polio, and Salk injected them with a vaccine that matched their strain of polio. He saw a significant increase in antibody levels following vaccination, indicating that the vaccine was working. At the Polk School, by contrast, most of the children were wards of the state. Because there had been a recent polio epidemic at the school, state officials gave Salk permission to proceed. Many of the Polk subjects had not had polio, so the experiment was riskier. Here too, the vaccine proved to be safe, it increased antibody levels significantly, and the protection lasted. These early tests seemed to indicate that Salk and his laboratory had created an effective killed-virus polio vaccine.
Following these early successful tests, Salk and the March of Dimes arranged for commercial vaccine manufacturers to make the vaccine following Salk’s directions. He soon vaccinated 7,500 school-age children in the Pittsburgh area using the commercially produced vaccine. Again, the vaccine proved safe and effective in raising protective antibodies against the three strains of polio. 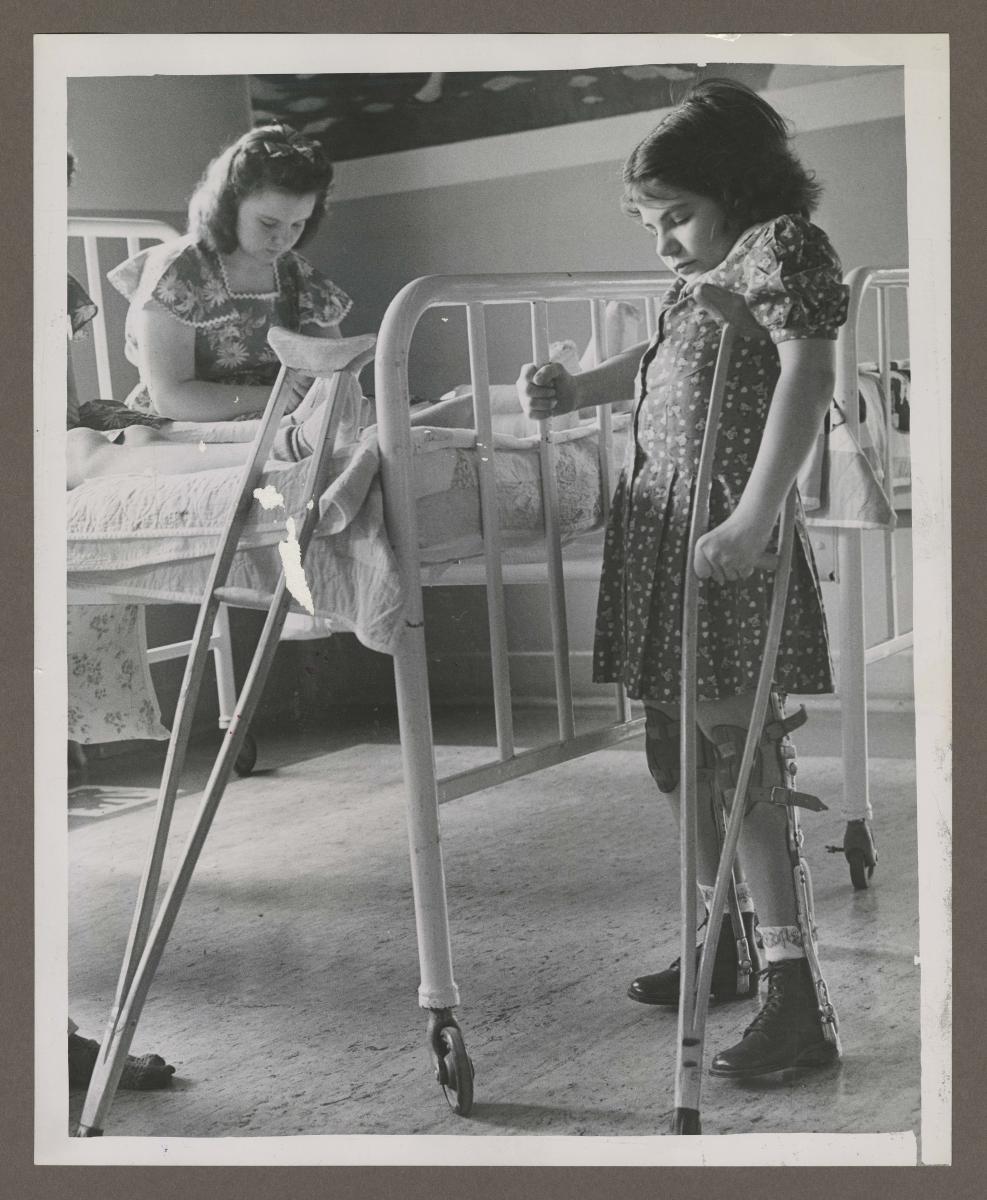 Mr. Wilson, thanks for this detailed account of the polio epidemic and how it impacted in the area. I grew up not far away in North Jersey and contracted polio as a child in 1955, so this essay was of particular personal interest to me. I am  one of the lucky ones who recuperated with no long term effects.