Reading Terminal Market: Then and Now

Reading Terminal Market: Then and Now 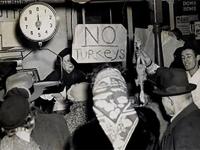 This is the eighth and final blog in A Philly Foodie Explores Local History-- a journey in food history that has led me to cook from Martha Washington’s original cookbook, connect with Philadelphia’s historic Italian Market, and dedicate an entire blog to Pennsylvania peaches.  It only seems fitting to end this blog series by visiting Reading Terminal Market, a popular foodie destination in the city today whose history reflects massive changes in American food production and distribution throughout the 20th century.  At the 1931 formal opening of The Food Show and Home Progress Exposition at Reading Terminal, president of Reading Company Agnew T. Dice spoke about the role railroads and modern technology played in reshaping the American dinner table at the time.  A copy of this speech along with an incredible collection of 1940s photographs have made their way into archives at the Historical Society of Pennsylvania and provide a lively view of the market’s past.  After peering into the history of Reading Terminal Market below and in the photo album to the right, you might be inspired to visit the market in person!  If that is the case, you will be happy to find two end-of-summer dishes at the end of this blog whose ingredients can be found entirely at Reading Terminal!

Reading Terminal Market’s roots go all the way back to the end of the 17th century when farmers from across the Delaware began selling produce in Philadelphia as outdoor street vendors along High Street.  The informal marketplace that developed was commonly known as the “Jersey Market,” since most of the vendors came from Jersey and eventually the name of the street would better reflect the scene by changing to Market.  The market that exists in Philadelphia today along 12th Street between Market and Arch was established in 1891 when the Reading Terminal Railroad Company purchased property containing an established indoor 30-year-old marketplace owned by the Twelfth Street Market Company.

A partnership between railroad and market was a smart business move in 1891, though the early days of the Reading Terminal Railroad and Market relationship was fraught with tension since the market had previously existed independently from the railroad.  As railroads developed across America throughout the late 19th and early 20th century, transporting goods across the country became drastically easier and more affordable.  The close proximity of a railroad station to a market would bring fresh produce and customers to the market and the demand for produce at the market would guarantee business for the railroad. 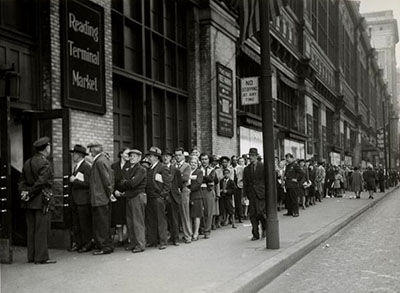 Outside Reading Terminal Market in 1946. You can see that the market was a very busy place from  this photograph as well as the first pitcture at the top of this article that reads "No Turkeys." That photograph was taken on Christmas Eve, 1944 when the shops had run out of holiday turkeys. (Philadelphia Record Photograph Morgue Collection).

Forty years into the railroad-market partnership, President of Reading Company Agnew T. Dice reflected on how modern transportation had transformed the American dinner table at the formal opening of The Food Show and Home Progress Exposition at Reading Terminal in 1931:

“The railroads and steamship lines bring the products of the world to this place.  Here you will find deer meat from the Arctic, nuts from Africa, dairy products and delicacies from Europe, nuts and fruits from the Argentine and Brazil, while China, India, Arabia, and I know not how many other countries send their best for the table to these counters.  The fruits of Florida and California as well as the vegetables from the South are ready for us when our own farms are frozen.  What were the delicacies for the rich alone a few years ago have become staple winter foods for all” (Dice, 2). 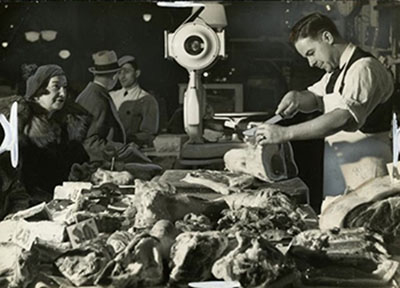 At the time Dice was speaking, more than $5 million in annual business was being done at Reading Terminal Market between 152 merchants who were open 6 days a week.  The market was the only in the state open for business so many days a week and had a new cutting-edge cold storage facility to support demand for produce.

“... within forty years (the market) has become an established Philadelphia Institution and its fame has spread across the entire nation.  Indeed, there is not a state in the Union to which goods from this market are not sent.  In Philadelphia the name is a synonym for good things to eat, honest values and fair dealing.  Pennsylvania boasts of this market as the largest in the State, and you may not know that it is the largest market in the country under one roof” (Dice, 1).

Today, Reading Terminal Market remains one of Philadelphia’s most popular foodie destinations with over seventy shops selling everything from artisanal cheeses to handmade donuts to knock-your-socks-off barbecue.  I don’t know about you, but after two months of exploring local history through food, I’ve worked up quite an appetite.  Below are two recipes that I love and made using ingredients from the market.  What could be better motivation to visit Reading Terminal Market then a good recipe?  And there is no better time than the present.

*Please note that the following dishes are not my own original recipes but have been adapted from  recipes found on the Food Network and New York Times online. 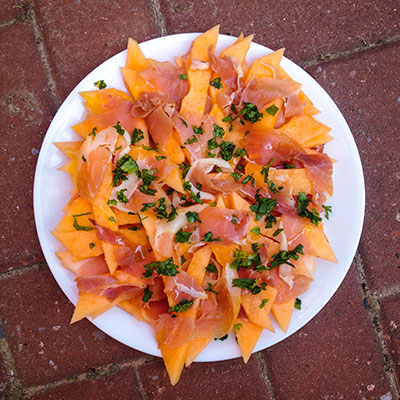 Original recipe can be found here. 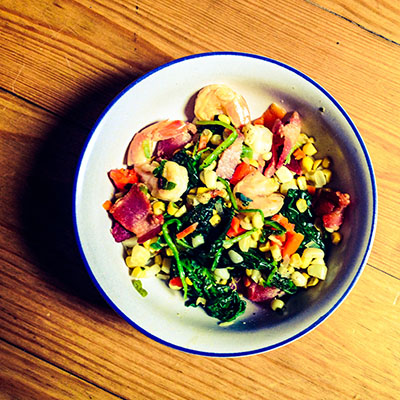 Directions: Before cooking, dice carrot, pepper, scallions, and shallot and cut corn off of the cob.    Meanwhile, fry bacon in a separate pan and set aside on paper towels when finished. Then in a large pot, melt butter and add shallot.  Add corn, carrot, and red bell pepper,.  Season with red pepper flakes, salt, and pepper to taste.  Cook for 5- 10 minutes.  Add shrimp.  Add spinach by the handful, stirring contents until spinach is wilted by the heat.  Serve after all of the spinach has cooked and crumble bacon on top as desired.

Original recipe can be found here.