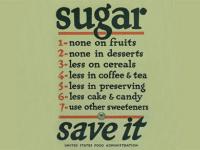 As you can see from the U.S. Food administration poster from World War I above, the idea of restricting sugar is far from being a new phenomenon.  From wartime rationing campaigns, to anti-slavery economic movements, to modern health anxiety, sugar has been the target of political and social concern throughout U.S. history.  Earlier this year, the World Health Organization generated international buzz on the subject with a draft of new sugar consumption guidelines recommending that the average adult limit their daily sugar consumption to 25 grams (or 6 teaspoons) while mentioning the average can of soda contains nearly twice that amount.  In America, where health statistics typically place average sugar consumption at 22 teaspoons a day for adults and a whopping 32 teaspoons for the children, there’s good cause to be concerned about eating too much sugar given its links to health issues like diabetes and obesity.  To be frank though, the dangers of the sweet substance have been covered so extensively by the news that you’re left thinking: “Sugar? Save it... I’ve heard it all.”  Traveling back to Philadelphia at the turn of the 18th Century through the eyes of Edward Pennington in "Observations on Making Sugar," my exploration of sugar through a historical lense, will highlight how the economic and cultural impacts of sugar are importantly missing from our conversation today.

Given that sugar is so easily available today in its white, purified form, it may surprise you that Philadelphia was a lucrative early American hub of the sugar refining industry.  Just as geography was responsible for the growth of the city in the first place, the accessibility of Philadelphia by water is largely responsible for attracting international sugar trade.  Due to a high likelihood of goods coming into contact with sea water during the trip overseas in wooden ships, sugar producers did not sell a finished, refined product internationally.  The scene below would have been familiar to locals as barrels of unprocessed sugarcane arrived in the port from abroad: 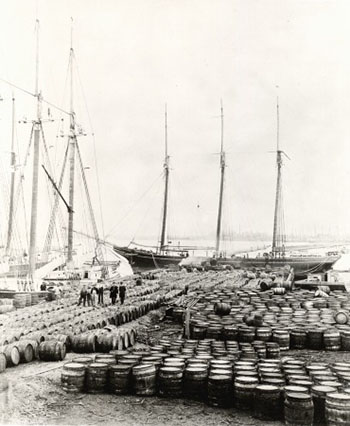 Click on the image above from the Pennsylvania Sugar Refining Company above for a closer view in our Digital Library.

“Observations on Making Sugar” is a collection of notes and business letters written by Edward Pennington from roughly 1760-1825 on the best methods of boiling sugar to remove its impurities and in preparation for sale.  Since sugar was arriving in Philadelphia in raw form, there opened up opportunity for businessmen like Pennington to step in as a middleman and add real value to the product by refining it.  Boiling sugar removed sediment which would drop to the bottom of the pan as mud, leaving the sugar whiter and more pure then before.  Pennington has all kinds of notes on the boiling process that emphasize what quality and quantity of water produces the whitest, finest sugar:

Above, Pennington is explaining the advantage of using more rather the less water to boil sugar: “the loaf sugar will be a great deal whiter for it-- This will please the customers...” (Pennington, 4).

Above, he describes how the finished product sugar should look: “It should be free and strong, the grain sharp as to hurt a little when rub’d hard between the thumb and sugar such as is of a grayish color will make a whiter loaf than that which is of a yellow cast” (Pennington, 4). 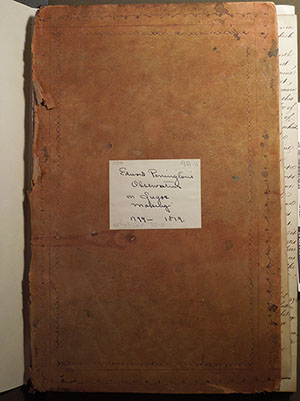 The cover of "Observations on Making Sugar"

The finished product that Pennington sold merchants and customers would have been a loaf or lump of sugar rather then the granulated form of the substance that we are familar with today.  A number of early American cooking records at the Historical Socety of Pennsylvania, such as the cookbook of William Penn’s first wife Gulielma Penn, contain instructions on how to smash and sift sugar for recipes.  Since all the labor of granulating sugar used to be done in the home, it’s no wonder that Americans ate less sugar in the past.  Imagine having to break down sugar every time you wanted to bake with it at home! 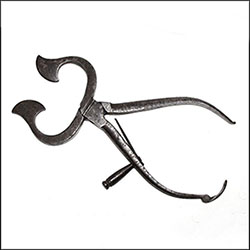 Above are a pair of antique sugar nips that were used to cut lumps of sugar off the loaf that would be smashed and seived for use as needed.

The raw sugar being processed by Philadelphia during Pennington’s lifetime, would have overwhelmingly been produced by slaves in sugar plantations in the Caribbean and West Indies.  Pennington’s ledger for 1799 shows $83,935.20 in purchases of raw sugar from the "Indies," making it unclear where the sugar came from.  Although this phrasing reads as a casual choice of words, there would have been significance to whether the sugar was from the East or West Indies and the choice to not specify where Pennington sourced his sugar might reflect tension over slavery at the time.  In addition to being the home of the “Observations on Making Sugar,” the Historical Society of Pennsylvania also is home to records of the Pennsylvania Abolition Society, which was based out of Philadelphia during Pennington’s time.  As the anti-slavery movement gained momentum, institutions like the Pennsylvania Abolition Society economically attacked slavery by refusing to purchase products made by slave labor.  Abolitionists who adopted this economic tactic of opposing slavery would have promoted the use of East India sugar over West India sugar because it was produced by free rather then slave labor.  While the Pennington family was Quaker and many Quakers opposed slavery from a religious viewpoint, a perusal of Edward Pennington’s account does not turn up any explicit discussion of slave labor.  This is curious and raises the question, why does Pennington not overtly address slavery in “Observations on Making Sugar?” 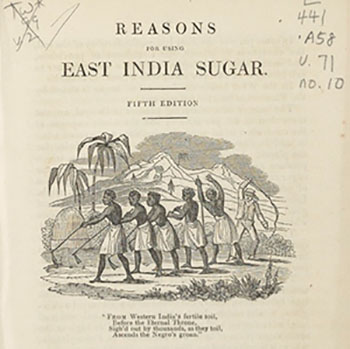 Click on the image above to view this abolitionist booklet "Reasons for Using East India Sugar"in our Digital Library.

After spending just a brief time with Edward Pennington’s 18th Century “Observations on Making Sugar,” you can see that there are plenty of economic, social, and political issues that lie outside the media’s current health-centered conversation about sugar.  While this blog could not possibly address all the complex historical issues that sugar is connected to-- slavery, colonialism, and industrialization are just a few examples-- this piece of food history should inspire us to broaden our view of sugar today.  Though the health anxiety about eating too much sugar is valid, why isn’t there more focus on other important aspects of the sugar industry?  Why don’t we talk about the labor that goes into sugar or how an industrial food system supports excess sugar consumption?  I challenge you to steer conversation about sugar towards economic, social, and political questions the same way you would if you were exploring it like a historical topic!

Are you sick of “Sugar is Killing You!” headlines? How would you rather talk about sugar?  Tell me what you think!

Is there any information at HSP about Richard Nisbet of Philadelphia who traveled to the Union Sugar Farm because of his knowledge in making cane sugar in the West Indies? He returned by raft on the Delaware River after the maple season was over.

I have read that Nisbet wrote about the benefits of cane sugar & refuted Dr. Benjamin Rush's articles on maple sugar.

Nisbet traveled to Manchester Twp.,Wayne County,PA in 1793 to assist John Kinsey, the manager of the Union Sugar Farm, because Kinsey from Bucks County had no experience in making maple sugar. The Union Sugar Farm 1792-1795 belonged to a corporation of Philadelphians; Henry Drinker was the treasurer.

Peggy thank you for your questions! I've looked around a bit today for items that might peak your interest and although my search did not immediately turn up explicit mention of Richard Nisbet, you'll have to let me know if my findings are helpful.

HSP has a collection of The Rush Family Papers 1748- 1876. I suspect that you might already be familiar with them since you mentioned that Nisbet disagreed with Rush's arguments about maple sugar. While I was looking through the finding aid for this collection, I found mention of a Charles Nisbet (1736-1804) under the list of "Personal Names." I am wondering if these two Nisbets were related to each other or if one name is an informal name for the other. Since the collection is quite large, it would take more work with one of our reference librarians who knows it well to figure out where to look for Charles Nisbet's appearance in the papers. Although he is listed under "Personal Names" in the finding aid, I do not see more information as to exactly what volume of manuscript material he appears in. This seems like something that might deserve a little digging.

Along the lines of more information related to Rush and maple sugar, HSP has Rush's "An account of the sugar maple-tree of the United States, and of the methods of obtaining sugar from it, together with observations upon the advantages both public and private of this sugar."

We also have the Henry Drinker Papers 1756-1869, which might be of interest to you as well since you also mentioned that Drinker was the treasurer of Union Sugar Farm where Nisbet visited for some time.

It seems likely that you've probably already looked through these sources, but I hope my thoughts (at least the bit about Charles Nisbet) will help push your research forward!