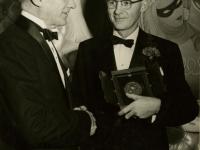 Low blood pressure kept Francis Bosworth (1904-1983) from serving in the military during the Second World War. In response, Bosworth, a seasoned writer, turned to social service. It was this second calling that brought Bosworth, an Episcopalian, to Philadelphia, where he was employed by the Quakers for nearly a quarter of a century to oversee a settlement house. Oversight led to activism, and in recognition of his efforts on behalf of urban development, Bosworth was awarded one of the city’s most prestigious honors in 1952, the Philadelphia Award. In this photograph, Bosworth, at right, receives the award from Judge Curtis Bok.

Born September 6, 1904, in Minnesota, Francis Bosworth began his writing career in the newsroom, working as an editor of the Minnesota Daily and as a reporter for the Minneapolis Journal. He moved to New York and continued writing for the New York Evening World. He taught journalism and drama at Columbia University, wrote a play, The Fields Beyond, which had a short Broadway run, and directed the Federal Theater Project, which was established under the Works Progress Administration in 1935. According to a 1967 article published in the Friends Journal, which was a modified reprint of an article that appeared earlier in the Sunday Bulletin Magazine (Philadelphia), Bosworth also filled his time in New York as an editor of a confession magazine, a music critic, and a public relations adviser to St. Patrick’s Cathedral and to the legendary screen and stage actress Tallulah Bankhead.

Bosworth was working for Newsweek when the United States entered the war in 1941. He hoped to join the military, but a classification of 4F kept him out of the service. Wanting to make his contribution to the war effort, he volunteered with the Quakers to teach English to refugees. His work was so impressive that he was invited in 1943 to become executive director for the Friends Neighborhood Guild, a Quaker settlement house in Philadelphia. At that time the Guild was located in an area considered the worst housing section of the city. Supporting 32,000 residents, two-thirds of the homes lacked toilets, electricity, and/or water. Finding the task “not his cup of tea,” Bosworth was told, “…it is awful. Your job is to make it better.” To do so, Bosworth refocused the mission of the Guild. Rather than passive assistance and handouts, the Guild encouraged tenants to become activists, taking charge and taking to task landlords negligent in keeping their buildings to code. According to the Journal, neighborhood constituents testified at legislative hearings in support of public aid to the run-down areas. By the late 1940s, the Guild, along with the American Friends Service Committee, devised a four-part housing program that was considered radical for its time. First, the project was to be cooperatively owned by its tenants; secondly, the project was to be interracial. Parts three and four required each tenant do some type of home improvement labor as part of their down payment; and lastly, the buildings were to be renovated rather than razed since they were structurally sound. After four years of fighting for approval, the Friends Housing Cooperative became a reality, sporting gardens, a courtyard, playground and communal facilities, such as a woodworking shop open to all tenants. As Bosworth recalled when he retired in 1967, along with the interracial stipulation, the “cooperative angle” was also innovative. “Now you see FHA-backed co-ops everywhere.” Bosworth later focused on programs for the young residents, establishing summer education projects.

In championing community relations, Bosworth worked closely with the Philadelphia Housing Authority, the Health and Welfare Council, and the Division for the Aged. He also used his writing skills to continue the cause, with articles such as “The neighborhood is our client,” (1949), “The story of Friends’ Neighborhood Guild” (1950) and “The cost of poverty" (1968). Francis Bosworth died May 1, 1983, at the age of 78.