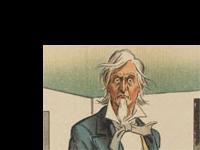 A few weeks back, we shared in the blog post Hail Columbia some political cartoons we've been researching for HSP's Historic Images, New Technologies (HINT) project that feature Columbia and other female personifications of the United States. We’ve also found several cartoons that use male figures as our national symbol.

Did you know that before Uncle Sam, there was Brother Jonathan? At first, Brother Jonathan represented rural New England, but during the American Revolution he came to symbolize the colonies as well. In the cartoon below, A Boxing Match or Another Bloody Nose for John Bull, Brother Jonathan, made to look like American President James Madison, punches John Bull, the national symbol for Great Britain, and gives him a bloody nose. 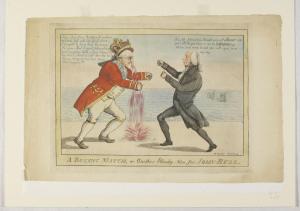 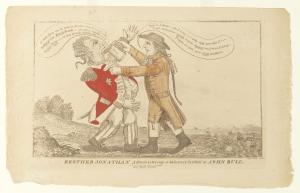 Brother Jonathan wasn’t the only national emblem we found in our HINT early American political cartoons. Jack Downing, who later became a “Major,” was a folk character popularized by author Seba Smith in the 1830s. In the cartoon below The Downfall of Mother Bank, Jack Downing pats Andrew Jackson on the back. Downing wears a top hat and striped pants, symbols that would later become associated with Uncle Sam. 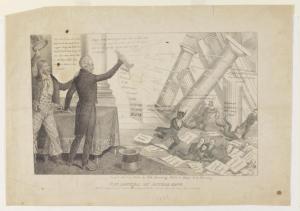 During the Civil War era the cartoonist  John Tenniel of Punch drew Abraham Lincoln to look like Uncle Sam. In the cartoon below, The Great Cannon Game Lincoln looks quite fashionable playing pool in Uncle Sam’s striped pants and star-patterned shirt. 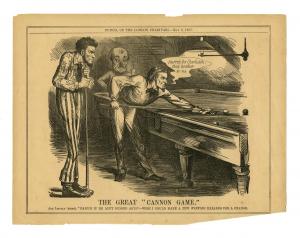 In Coney Island and the Crowned Heads Uncle Sam opts for a casual look at the beach and wears a stars-and-stripes swimsuit. He graciously welcomes a group of European monarchs, including Marianne, the national emblem of France. Marianne is the slender woman wearing a Phrygian (or "liberty") cap, running next to Queen Victoria of Great Britain. 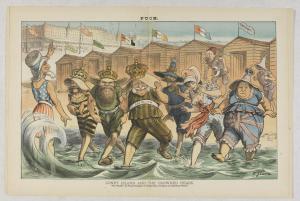 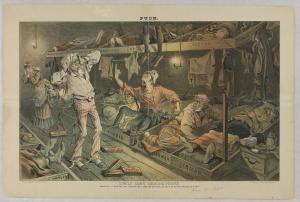 The fictional character of Uncle Sam first appeared during the War of 1812. According to popular belief, he was named after Samuel Wilson, a government meat inspector during the War of 1812. Although the character of Uncle Sam has been around since the beginning of the 19th century, he didn’t begin to eclipse Columbia in popularity until the 20th century.

In  Remember the Maine and Don’t Forget the Starving Cubans, Uncle Sam appeals to the American sense of justice and implores the nation to go to war against Spain to save the “starving Cubans” and to avenge the tragedy of the USS Maine. 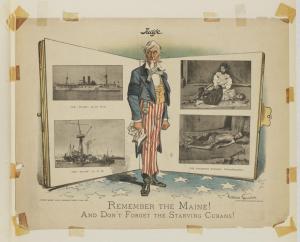 Remember the Maine! And Don't Forget the Starving Cubans! 1898

In To Avoid the Horrors of War, Uncle Sam is portrayed as quite the “ladies man” as he places his arms around four beautiful ladies representing Cuba, Puerto Rico, Ladrones Islands, and the Philippines. Spain ceded most of its colonial territories in the Western Hemisphere to the US at the conclusion of the Spanish-American War. In the background, a man representing Spain crosses his arms and gives a sour expression. 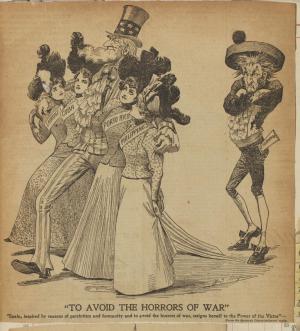 We hope you’ve enjoyed exploring our HINT cartoons which feature American national emblems. Be sure to check out our digital exhibit, Politics in Graphic Detail, when it becomes available later this year.