When Cartoonists Were Criminals

When Cartoonists Were Criminals 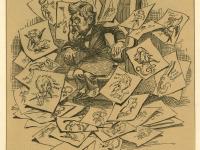 In 1903, political cartoonists – especially one man, Charles Nelan – made the governor of Pennsylvania so mad that he criminalized cartooning.

You read that right. Gov. Samuel Pennypacker and his allies pushed through a law that made it illegal in Pennsylvania to publish or even draw cartoons that portrayed people (i.e. politicians) as "beast, bird, fish, insect, or other inhuman animal." Who knew that cartoons could inspire such passion, such outrage, such . . . legislative willpower?!

This 1903 kerfuffle is just one of the interesting episodes we're researching while we continue work on HSP's Historic Images, New Technologies (HINT) project. As we've described in past blog posts, we're using historical political cartoons to demonstrate the new tools we're developing for describing visual materials in archives.

Poor Gov. Pennypacker was quite offended at how he'd been portayed during his election campaign in 1902, when cartoonist Charles Nelan of the Philadelphia newspaper The North American regularly depicted him as a parrot. The parrot was usually mimicking the words of U.S. Senator Matthew Quay, a powerful political boss in Pennsylvania and a cousin of Pennypacker's.

Here's one example from September 1902. The parrot in the top right represents Pennypacker, and the man in the center is Quay. (This cartoon also comments on a lengthy anthracite-coal strike that was then in progress, and the role of Chinese labor.) 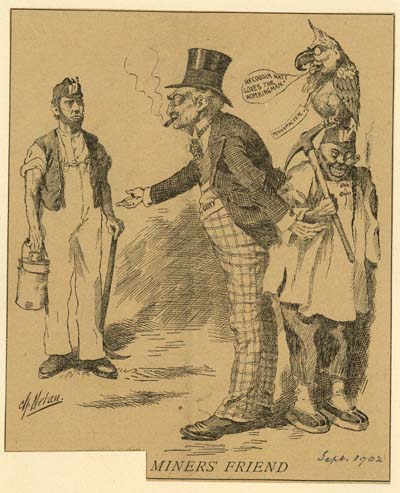 Keep in mind that at this time, some newspapers printed a political cartoon on the front page, right under the newspaper's masthead. You couldn't miss them.

Nelan and The North American were clearly opposed to Pennypacker's candidacy, and to Quay's role in the campaign. Nevertheless, Pennypacker resoundingly won the governor's seat in November 1902.

When Pennypacker took office in January 1903, he made clear that he hadn't forgotten Nelan's attacks: his inaugural address included remarks about "sensational journals" that were a "terror to the household, a detriment to the public service and an impediment to the courts of justice." He suggested that state legislation might be needed, and Rep. Frederick Taylor Pusey complied within days.

Nelan and The North American were not impressed. Nelan drew Pusey as a cat, cozying up to the Pennypacker parrot: 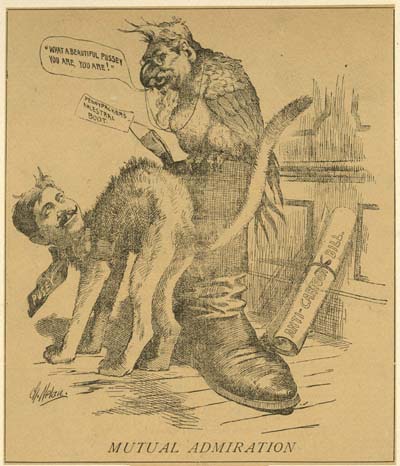 Those in the newspaper industry in Pennsylvania were outraged. According to historian Steven L. Piott, more than 300 newspaper owners and editors appeared at a public hearing on April 21, 1903 to complain that their legal and constitutional rights had been violated. Pennypacker signed the bill into law anyway on May 12, 1903.

However, the story doesn't end there. Criticism of Pennypacker and the anti-cartoon law expanded nationwide, at least among those who wrote and published the news. More than 75 out-of-state newspapers sent editorials to The North American criticizing the law, according to Piott. Cartoonists from around the country weighed in as well. The North American reprinted some of the supportive cartoons in its own pages, including this one by Washington Post cartoonist Clifford K. Berryman: 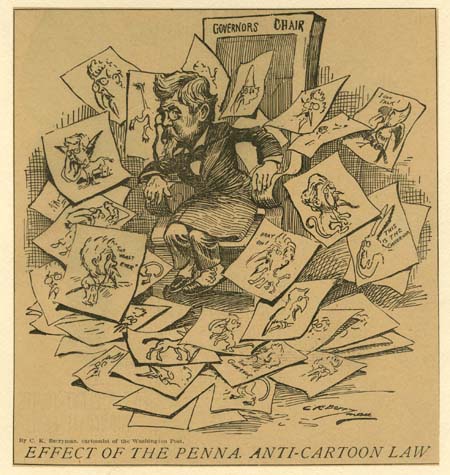 Clifford K. Berryman, "Effect of the Penna. Anti-Cartoon Law," from The North American, circa May 1903. Originally appeared in The Washington Post titled "Portraits of Pennypacker," on May 16, 1903. (Hampton L. Carson papers, #117).

The offending Charles Nelan himself depicted the law as a firecracker of negative attention that blew up in Pennypacker's face: 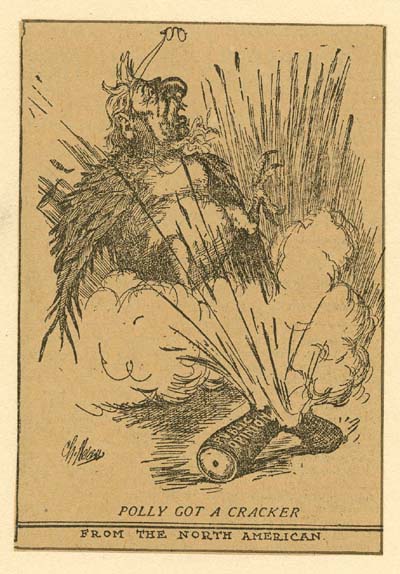 Perhaps because of this public outrage (or at least press outrage), the law was never enforced, and it was repealed in 1907 when a new governor took office.

As for Pennypacker, he also happened to be an avid historian, and played an important role in HSP's history, too. He served as HSP's president from 1900 to his death in 1916, including during his governorship. I'm sure he'd be none too pleased that HSP is now working to make these political cartoons even more widely accessible!

To learn more about Pennsylvania's anti-cartoon law of 1903, read Steven L. Piott, "The Right of the Cartoonist: Samuel Pennypacker and Freedom of the Press," which appeared in Pennsylvania History, v. 55, no. 2 (April 1988): pp. 78-91. Richard Samuel West also wrote about this episode in "The Pen and the Parrott: Charles Nelan Takes on the Governor of Pennsylvania," which appeared in his journal, Target, in Autumn 1986, pp. 13-20.