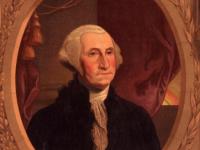 Where’s Washington? Judging by the number of search results when using the terms “George Washington” in HSP’s online catalog, Discover, the answer is: Everywhere!

For college students such as myself, search “George Washington” and prepare to be overwhelmed by several thousand results. Granted, not all of them refer to the Virginia planter-turned-President, George Washington (1732-1799), son of Augustine and Mary Ball Washington. Many mothers and fathers found it fit to name their sons after the former Commander-in-Chief (George Washington Carver, George Washington Bartram, the list goes on.)

Narrowing the search to the Washington in question, however, there are still thousands of results. HSP holds materials ranging from Washington's pocket diary, letters in his own hand, artwork, published materials, accounting records, ephemera, to even a locket of his hair! While the bulk of Washington’s papers and other records are now scattered across several institutions, HSP holds several items offering a unique insight into Washington, the man and his legacy.

Upon performing my own quick search of Washingtoniana, or papers, books, letters, and relics relating to George Washington, I too was overwhelmed. To help other students and those interested in the first POTUS, I’ve compiled a list – by no means comprehensive! – of several materials I’ve found particularly revealing of Washington’s time as a general, president, and private citizen.

Like most passions, I have trouble explaining exactly where my Washington-mania comes from. It may be as simple as the Liberty’s Kids program I watched every day growing up, featuring three teenage journalists working for Benjamin Franklin. I viewed Washington at a young age as most of his contemporaries seem to have viewed him: as a dashing yet earnest figure. Washington continues to fascinate me, making his way into my college studies as a history major at Temple University. In my courses as well as through my internship at HSP, I’ve had the privilege of learning about the Washington that textbooks minimize, or forget to include altogether: Washington as a man, in all his complexities and contradictions. Through his letters, I’ve been privy to Washington's thoughts and feelings, his anxieties and his principles. HSP puts a world of Washington at the fingertips of researchers and students like me, with this brief survey serving as a helpful port of call as you explore one of the most important figures behind the founding of our country.

If you’ve stumbled upon a piece of Washingtoniana that has impacted you, please feel free to comment below - I'd love to hear about it!