World War I Posters at the Historical Society of Pennsylvania

World War I Posters at the Historical Society of Pennsylvania 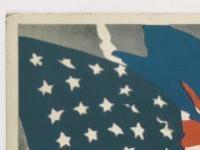 I started working in September as a joint digital collections intern at the Historical Society of Pennsylvania and Villanova University. The Historical Society of Pennsylvania and Villanova are in the process of creating a digital exhibit that highlights World War I-era resources from institutions within the Delaware Valley region. The project will go live on the 100th anniversary of the assassination of Archduke Franz Ferdinand on June 28, 2014, and will continue to commemorate the Great War over the next four years. As an intern, I have had the opportunity to explore the Historical Society’s World War I-related collections, and digitize the items that grab my interest.

I was immediately drawn to the Historical Society’s collection of World War I posters, which has recently been absorbed by the Historical Society's larger war posters collection. As an undergrad at Dickinson College, I worked with a series of Civil War-era political cartoons, and I continue to be fascinated by visual and verbal representations used in propaganda. The posters within the Historical Society’s collection cover a diverse number of topics during this wartime era. Posters range from health warnings generated by the Pennsylvania Society for the Prevention of Tuberculosis to the National War Saving Committee’s promotion of war saving stamps to help crush “Kaiserism.” 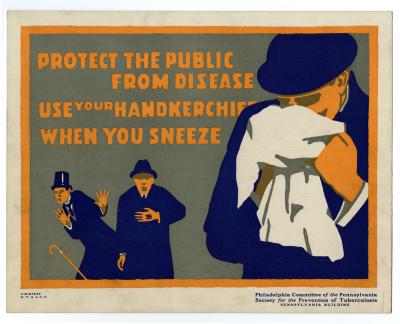 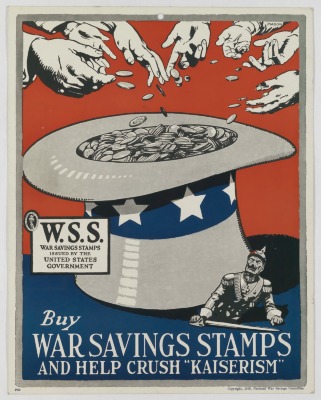 Several posters highlight life as normal in Philadelphia before the United States joined the war in 1917. While British and German battleships destroyed each other during the Battle of Jutland, Philadelphians paid 25 cents to attend the Civic Exposition, which ran from May 15- June 10, 1916 at the Commercial Museum on Spruce Street. 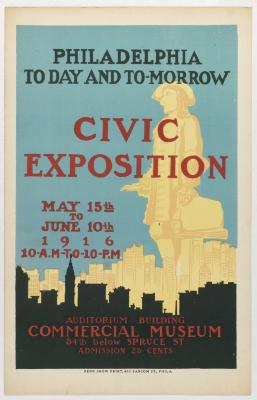 While non-war related images caught my eye, the collection is logically dominated by posters that urge their viewers to support the country’s war efforts. The Navy’s recruitment tactics included appeals to the math-oriented, “Men + Guns and Ships = Navy,” 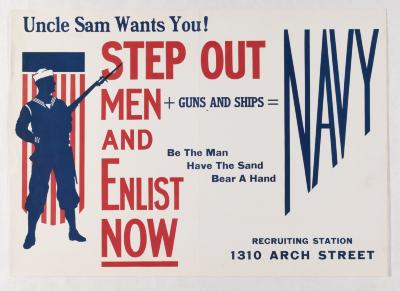 the adventure-seekers, “See the World,” 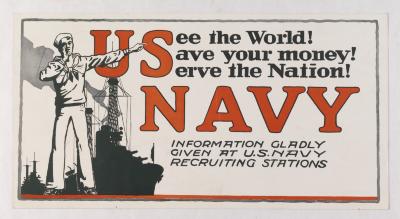 the penny-pinching “Save Money,” 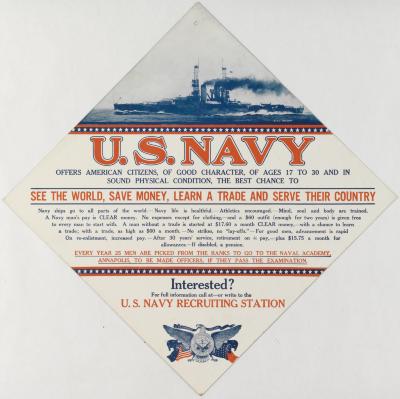 and the patriotic, “Your Country Needs You!” 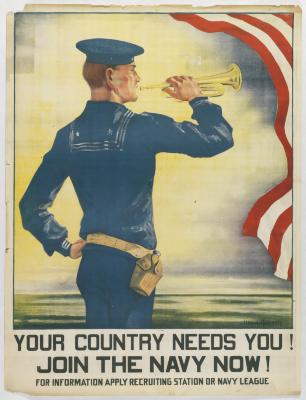 HSP's collection includes an impressive number of recruitment posters, many of which direct the viewer to a local recruiting station. The station in Philadelphia was located at 1229 Arch Street, today the site of the Pennsylvania Convention Center. 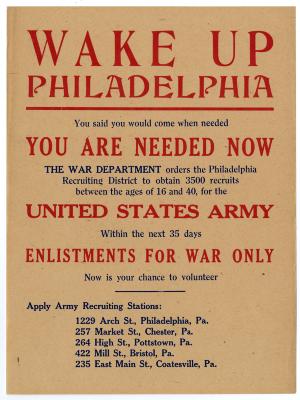 While these posters have a tendency to stir up a certain level of patriotic zeal, some of my favorite posters in the collection are not directed towards men capable of enlisting, but towards Philadelphia's women. Whether a woman joined the Volunteer Factory Service, tended crops with the Land Army, or became a more mindful homemaker, these were all honoarable and necessary wartime postitions. 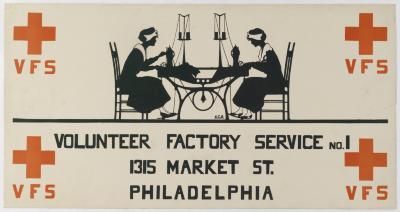 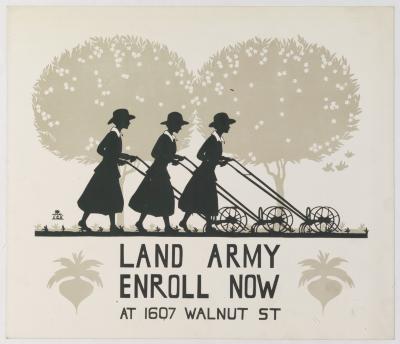 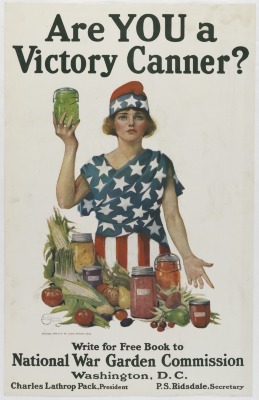 Geographically, America's homefront was thousands of miles away from military action. Wartime propaganda, however, emphasized the direct effect sipping a sugary drink at home could have on the war effort. 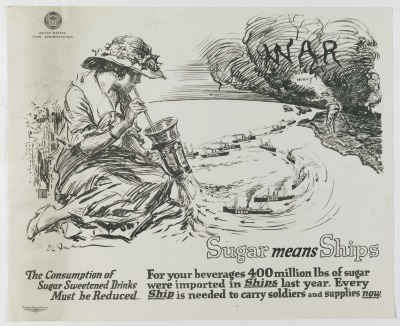 As we begin to commerate a war that was fought 100 years ago, resources like these posters provide a window into the mindset of World War I-era America, and perhaps provoke examinations into how the United States portrays war today.