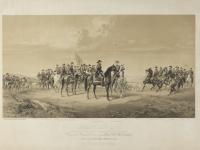 The famous surrender during the American Civil War of the Army of Northern Virginia as commanded by General Robert E. Lee, at Appomattox Courthouse, Virginia on April 9th, 1865, to the forces of General Ulysses S. Grant, Army of the Potomac, are well-known and have been highly publicized for many years. Yet most are unaware of Pennsylvania’s connection to the event.

Pennsylvania and the Delaware Valley were certainly represented at the surrender of the Confederate forces, by infantry regiments such as the 61st, 62nd, 88th, 121st, 140th and the 205th. A member of Battery B of the First New Jersey Artillery, recalled in his reminiscence how after the surrender, “…The Confederates, no longer our enemies, came to our lines for coffee and hardtack, which we gave freely.” Another soldier of the 140th Pennsylvania wrote home to his mother on the ninth of April: “Lee has surrendered with his whole army…Thank God we have been permitted to see this glorious day…The men of Lee’s army have torn down their works, stacked their arms and are now encamped quietly alongside of us as though they formed part of our army.”

Interestingly, on the day of the surrender itself and shortly thereafter, a number of excellent illustrations of the events began to appear. For example, Prussian-born  Lt. Col. Otto Boetticher – of the 68th New York Infantry – completed a watercolor of Lee and Grant on horseback the day after the surrender.  It was soon lithographed by Currier & Ives artist Louis Maurer and published in 1868.

The Rev. S. L. Gracey, Chaplain of the Sixth Pennsylvania Cavalry (also known as the Philadelphia Light Cavalry), included details of Lee’s surrender in his publication, Annals of the Sixth Pennsylvania. Edgar H. Klemroth, recruited from Philadelphia and serving in Company A, left a detailed drawing made at Appomattox Courthouse on the day of the surrender. It was later published as a lithograph in 1872.

Edgar H. Klemroth, born in New York to Prussian immigrants, was living in Philadelphia  and working as a “bookbinder” at the outbreak of the Civil War. After serving in the Cavalry from August 1861 until mustered out at Louisville, Kentucky in August 1865, he worked as a ‘draughtsman’ or draftsman. However, during the decades of the 1870’s and 1880’s,’ Klemroth is listed within the Philadelphia City Directories specifically as an “Architect.” During that time in 1884, he also received a ‘patent’ for the invention of a “nut-lock” as an attachment to a ‘bolt,’ “so that it cannot, unaided, become loosened or come off."

Klemroth was thus a versatile and talented individual.  Not only had he made a number of illustrations during the Civil War itself, but worked for the Federal Government “in the Office of  {the} Supervising Architect-Treasury Department,” from March to May of 1891 as a “draftsman,” residing as well in Washington, D.C., or the District of Columbia. Later he continued to work as an architect, responsible for the construction of the Federal Building and Post Office in West Chester, Pennsylvania (ca. 1905). He passed away on May 5, 1934, and buried in Arlington National Cemetery.

I very much appreciate the superb scholarship and research by my colleague, Dr. Dan Rolfe of HSP. But, he has neglected to mention the most important resident of Philadelphia and thus the Delaware Valley who figured very prominently in the Surrender of General Lee and his Army of Northern Virginia. In fact, HE was the commander of the Army of the Potomac (mentioned in the article), and most historians agree had more to do with bringing Lee to surrender than any other. That man is Major General George G. Meade, Commander of the Army of the Potomac and Victor of the Battle of Gettysburg.
By the way, Meade wrote extensively in his letters home and in 'After Action Reports' describing the Appomattox Campaign.