For several years during the 1930s, social worker Joseph Beck served as head of which Philadelphia organization?

Home › Blogs › Question of the Week › For several years during the 1930s, social worker Joseph Beck served as head of which Philadelphia organization?

For several years during the 1930s, social worker Joseph Beck served as head of which Philadelphia organization? 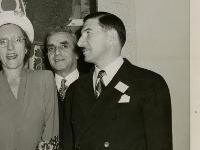 The Jewish Welfare Society provided services, such as counseling, work relief, small business loans, and shelter for the homeless, for Jewish refugees from Europe to the United States during the 1930s.

Joseph Emanuel Beck (1904-1981) was Avrom Bach’s (ca. 1864-1928) and Bela Ciora’s (ca. 1969-1921) first child born in America.  Avrom and Bela, both Romanian Jews, already had four older children, all of whom were born in Romania before the couple immigrated to America and settled in Racine, Wisconsin. Beck pursed social work during his graduate studies, and he developed a keen interest in helping immigrant families. After a stint as executive director of the Family Welfare Association of Scranton, Pennsylvania, Beck took the role of executive director of Philadelphia’s Jewish Welfare Society (JWS).

When Beck first began working for JWS in 1934 the organization had plenty of funding for its small number of refugee cases.  As Hitler’s presence in Europe increased over the mid to late 1930s, however, so too did the number of Jewish refugees to the United States.  In the late 1930s, the number of refugees who sought services from JWS increased rapidly.  Unfortunately, JWS could not cope financially with the increase in refugees and had to halt its resettlement services in late 1939.  Beck went on a personal crusade to help find funding for JWS and resources for the refugees. This led him to the National Refugee Service (NRS) in New York City, which aided JWS. Beck served the JWS until about 1942, and soon after he became the executive director of the NRS.

In 1950 Beck moved to California. He continued to serve various Jewish organizations and civic agencies until his death in 1981.

The Joseph Beck papers (#3083) is a small but rich collection that includes correspondence, family records, photographs, clippings, and 16mm films.  The majority of the collection is comprised of Beck’s candid and personal writings on a variety of social, political, and cultural topics, include those relating to his work with Jewish refugees.  Many of these writings were used in Beck’s autobiography, a copy of which is also in this collection.

An expanded version of this article appeared in the April 12 Currents Section of the Sunday Philadelphia Inquirer.

Question of the Week

Look for these history stories every Sunday in the Philadelphia Inquirer. The stories, called Memory Stream, are published in the Currents section of the newspaper.