Why was the Liberty Bell in San Francisco in 1915?

Printer-friendly version
Home › Blogs › Question of the Week › Why was the Liberty Bell in San Francisco in 1915?

Why was the Liberty Bell in San Francisco in 1915? 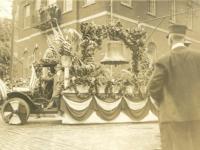 Though the Liberty Bell is now a fixture between 5th and 6th streets on Market Street in Philadelphia, it wasn’t always so permanent. Throughout the late 1800s and early 1900s, the bell was often shown at fairs and exhibitions around the country. The bell served as a symbol and reminder of American independence (and was occasionally rung and often touched by viewers).

The bell made its final trip out of the city in 1915 for the Panama-Pacific International Exhibition. While its purpose was to celebrate the completion of the Panama Canal, it also allowed San Francisco to show off its rebuilding efforts since the 1906 earthquake. When exposition officials appealed to Philadelphia for the bell, city representatives were hesitant to let the bell travel again, fearing that it might sustain damage during the long journey. However, their minds were swayed when they received a signed petition from 500,000 California children asking for the bell. Philadelphia Mayor Rudolph Blankenburg approved the request.

The bell began its trip from Philadelphia with a grand parade on July 5, 1915. It had several scheduled stops before it reached the west coast. By train, the bell traveled over 10,000 miles and made stops in thirteen states, including Pennsylvania, Ohio, Missouri, Nebraska, Wyoming, Idaho, Washington, and Oregon before reaching California. The bell was met with plenty of patriotic enthusiasm and was one of the highlights of the fair. In December, the bell began its return journey, visiting fourteen states, including Arizona, Texas, Tennessee, Kentucky, New York, and New Jersey, before reaching its destination.

Question of the Week

I have an original copy of the photo album that depicts the trip of the Liberty Bell from Philadelphia to San Francisco and back in 1915. It was presented to John H. Burton. Mr. Burton made the container that was used to ship the bell and also accompanied it during the tour. Would you know of a collector that would be interested in purchasing this. Thanks so much.

Thanks for your question Mr. Hornstein. Unfortunately, no, we don't know of a particular collector in our area that would be interested in purchasing your scrapbook. We aren't in the habit of dealing directly with local collectors. If you were looking to simply have the scrapbook appraised, then we might be able to put you in touch with one of our appraisers.

Sorry we couldn't assist you, but thank you for reading the Question of the Week.

Is your photo album still available for sale?

My grandfather Joseph Frank was one of the police offers who escorted the bell to San Francisco. We had one of these albums but in 1976 we lent it to the city of Philadelphia for the bicentennial. This Album was never returned. Please contact me at kmccorm49@gmail.com to discuss you selling your album.

We are looking for a value to put on this album for our vintage book sale. We are the friends of the Milford Public Library. It is an original one and the photos are in good condition. The cover is not attached but is there. If you can help us or direct us to someone who would know. Thank you Nancy

Thanks for reading and commenting. If you'd like a list of (mostly local) appraisers, email me at chutto@hsp.org. We've compiled one that we regularly give out for such requests.

Do you know the locations and dates for Pennsylvania of when the Liberty Bell traveled in 1915?

Look for these history stories every Sunday in the Philadelphia Inquirer. The stories, called Memory Stream, are published in the Currents section of the newspaper.