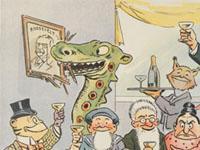 A few weeks back, we shared some political cartoons we've been researching for HSP's  Historic Images, New Technologies (HINT) project, that referenced classic works of art; we've also found several cartoons, however, that draw inspiration from the pop culture of their times.

The 1896 political cartoon "Effect of Roentgen's Rays," for instance, references Wilhelm Conrad Roentgen, credited with the discovery of x-rays. In the cartoon below, Senator Boies Penrose of Pennsylvania and Republican party boss David Martin, who appears to operate an x-ray device, stand over the body of President of Select Council Wencel Hartman. 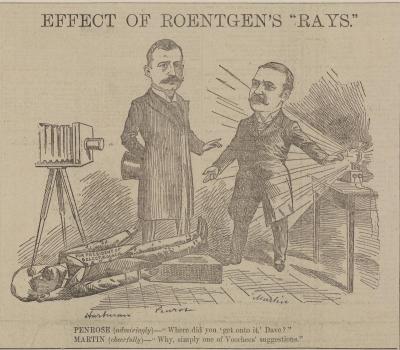 While most people think of X-rays in purely medical terms today, Roentgen's discovery set off a huge fad in the 1890s. Roentgen made the first X-ray film in November 1895 when he took an image of his wife’s hand. After he gave a public lecture on his discovery, people became fascinated with "Roentgen’s Rays" and began taking "bone portraits." Inventors even tried to develop X-ray devices for household use. Advertisers took advantage of the craze and made associations between their products and X-rays: consumers could buy "X-ray" headache medicine, soap, and whisky.

The following political cartoon, “If-The Inaugural Dinner at the White House,” features several well-known comic strip characters. William Randolph Hearst, a candidate for the 1904 democratic nomination and owner of the New York Journal and San Francisco Examiner, gives a toast. At the table are seated characters from Katzenjammer Kids, a popular comic strip published in the Sunday supplement of Hearst’s New York Journal. Characters from the Little Bears play musical instruments in the corner while Mr. Jack, the man standing below the portrait of Teddy Roosevelt and wearing a top hat and bow tie, raises his glass to Mr. Hearst. 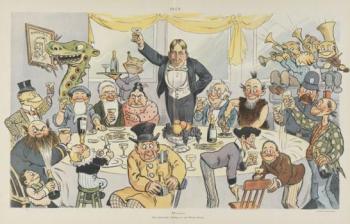 If-The Inaugural Dinner at the White House, 1904, from Puck, in Historical Society of Pennsylvania cartoons and caricatures collection (#3133)

The following political cartoon, published in the humor magazine Puck, references the popular 19th-century  poem "Darius Green and His Flying Machine," by John Townsend Trowbridge.  In "The Political Darius Green and His Flying Machine," presidential aspirant John Sherman flies above a barn in a flying machine made up of his "bloody shirt" and "speeches." He exclaims: "I’ll astonish the nation,/ An' all creation,/ By my great Presidential Aspiration." Despite his best efforts, Sherman’s presidential hopes were later dashed when he lost the nomination to Benjamin Harrison in June 1888. 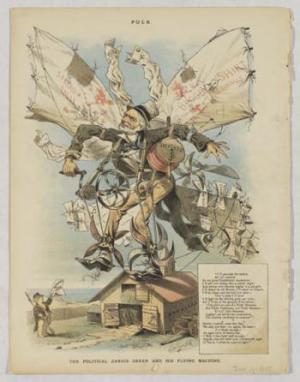 "The Political Darius Green and His Flying Machine," 1887, from Puck, in Historical Society of Pennsylvania cartoons and caricatures collection (#3133)

A number of cartoons use fairy tale imagery. The Wasp’s 1883 "Who Will Wake Sleeping Beauty?" creates a tableau from the story of Sleeping Beauty and transforms famous political figures like Ulysses S. Grant and Grover Cleveland into dwarves. 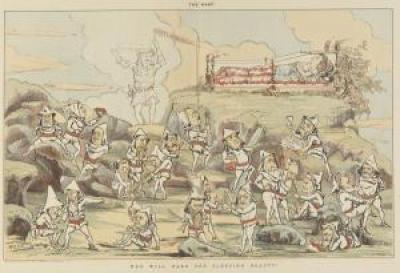 Who Will Wake Sleeping Beauty?, 1883, from Wasp, in Historical Society of Pennsylvania cartoons and caricatures collection (#3133)

A later cartoon published in 1908 in the Philadelphia North American also uses the fairy tale motif to criticize government corruption and corporate monopolies.  In "A Beautiful Fairy Tale," John D. Rockefeller sits on a rocking chair and recounts his own version of a fairy tale—one about kind-hearted and ethical corporate monopolists—to a tiny stand-in for the "common people." 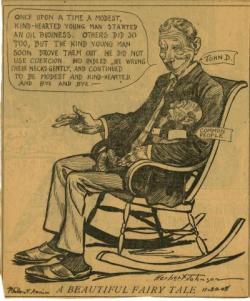 These five political cartoons are just a small sample of the many cartoons that make pop culture references. We hope that you check out the rest of our newly digitized cartoons when the exhibit becomes available later this year.

I've really enjoyed this series of blogs on the Political Cartoon Project! Thank you for sharing, these blogs have really given me a sense of how the project is progressing. Being able to look at the detailed images up close online is great.

We love your enthusiasm Sarah! Please keep reading this blog series--we'll be sure to continue posting more about the project and the content of the cartoons.

We're glad that you've enjoyed this blog post and hope you'll continue reading our future posts about the HINT project. Be sure to keep an eye out for the digital exhibit when it goes live later this year.