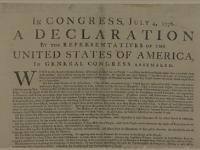 On July 4th, 1776, the Second Continental Congress adopted the Declaration of Independence which proclaimed to the world that the 13 colonies would no longer be ruled by the British Crown but, instead, be independent and self-governed. This document embodies Enlightenment thinking and establishes the American political core value system that “all men are created equal,” individuals are born with certain “inalienable rights, ” and it is the job of the government to protect those rights. It also justifies that when a government fails to perform its duties and abuses its power, “it is the Right of the People to alter or to abolish it, and to institute new Government.” The Declaration of Independence is one of the most influential and widely read documents in modern world history and can be broken down into five different parts; introduction, preamble, indictments, denunciation, conclusion, and signatures. This lesson will utilize both the introduction and the preamble.

Students will explore the complex use of language and phrasing in the Declaration to infer meaning and identify ideas and values. They will start by reading the introduction and preamble and synthesizing different sections into tweeter style hashtags. The goal of this part of the lesson is to have the students wrestle with complex ideas and condense them into just a few words and demonstrate comprehension. The second part of this lesson will utilize the “John Dunlap printing of the Declaration of Independence” held in the collection at the Historical Society of Pennsylvania to reveal students ability to articulate the multipart concepts presented within the Declaration of Independence. This unique publication was based on the handwritten copy Jefferson used when he presented it to Congress and contains quotation marks around phrases Jefferson wanted to emphasize and stress. Students will be tasked to mark up a copy of the introduction and preamble to reflect how they would read it aloud and then compare it to Jefferson’s version to see if they would have expressed the ideas in the same manner.

What document or artifact best summarizes the United States and why?
What role does analysis have in historical construction?

John Dunlap printing of the Declaration of Independence

1.     Students can be in pairs or do this as an individual activity.

2.     Pass out “#hashtaging the Declaration of Independence” worksheet and go over directions with students.

Students will be reading different sections of the Declaration and coming up with tweeter style hashtags that represent what those sections mean. Humor should be encouraged, but the goal is to have the students express the complex ideas of the Declaration in their own words by chunking these ideas in the worksheet. When finished with this worksheet students will have wrestled with, and inferred, the deeper meaning behind phrasing Jefferson used in this document.

3.     Do the first hashtag with the students as an exemplary and have the students share the hashtags they created.

5.     Go around the room and have 2-3 students share their hashtags for each section.

6.     To wrap-up this section of the activity -  “Give the Declaration of Independence a Tweet":

c.      Use one #hashtag for the whole document

d.     Create a twitter ‘handle’ the Founders would have

7.     Go around the room and have students share their tweets (if time permits have the students pick the best tweet and put it on the wall).

1.     Pass out the student version of the Introduction and Preamble.

2.     Have the students pretend that they just wrote this document and now it is going to be read in front of Congress. The problem, however, is that they will not be reading it; someone else will. They need to underline and mark the parts of the Declaration of Independence that are the most important so that when it is read aloud, the person knows what to stress and be forceful.

3.     Explain to the students that when Thomas Jefferson presented the Declaration of Independence to the Second Continental Congress, he marked it up so he would remember what parts he wanted to express louder or more forcefully.

5.     Once the students are done have them put their names on their copies and gather them up.

a.      Once all student have turned in their marked copy ask for two or three volunteers.

b.     Give those two or three volunteers someone else’s marked up Declaration and have them read it out loud (teacher should also read one).

c.      Notice how different styles and tones can change the meaning of the document.

6.     Display Jefferson’s copy on the board (this the “John Dunlap printing of the Declaration of Independence.”) and explain that Jefferson put quotation marks around the phrases he wanted to emphasize.

7.     Pass the student’s copies back out to them and see if anyone got close to Jefferson’s version.

8.     Wrap-up this activity by having the students write a paragraph reflecting on why they think the Declaration of Independence has endured this long and is one of the most influential documents in modern world history.

Worksheet for Part A of the lesson

Worksheet for Part B of the lesson

teacher's copy of worksheet for Part B of the lesson

Declaration of Independence
Articles of Confederation
The Seven Principles of the Constitution
Preamble to the U.S. Constitution

This lesson was created by Brendon Floyd, Education Intern at the Historical Society of Pennsylvania