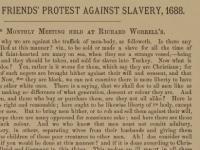 [This lesson illustrates the variety of Digitized Educative Features that will accompany lesson designed for Reading Like a Historian 2.0.  This Document-Based Lesson uses content from a lesson currently on hsp.org and does not necessarily incorporate all of the practices the new curriculum would. This lesson would be part of teacher discourse about how to teach "Crisis of the Union: Civil War and Reconstruction (1850-1877)."] What arguments did abolitionists make against slavery? How did abolitionists propose to end slavery? These historical questions are at the center of this two-lesson unit focused on seven primary documents. In engaging with these questions and these documents, your students will consider the impacts and the limits of abolition, a social movement that spanned hundreds of years.

The documents in these lessons span from 1688 to 1860. To fully benefit from these lessons, students should be familiar with the basic history of slavery in the United States. Some understanding of colonial American history, the American Revolution, the era of Manifest Destiny, and the abolition movement will also be useful. In an American history course taught chronologically, these lessons would therefore fit best shortly before or shortly after covering the Civil War. In a history course taught thematically, these lessons would work well embedded in larger units on activism and social change or slavery and freedom.

In these lessons, your students will learn about the complex history of abolitionist thought in this country. They will develop their understanding by identifying and articulating the various arguments that people made against the institution of slavery and the different proposals made to try and end slavery. They will analyze documents to learn that anti-slavery ideas and emancipation plans changed over time, depending on their author, audience, and context. In the process, your students will develop historical thinking skills and learn historical concepts by answering the central historical questions with evidence from primary sources.

These primary sources will pose some challenges for students, not the least of which is their length. For this reason, you may choose to present students with the modified documents, also included in the lesson plans under "Other Materials." Note that the practice of adapting historical documents for the secondary classroom is supported by education research; for an introductory discussion, see “Tampering With History: Adapting Primary Sources for Struggling Readers” by Sam Wineburg and Daisy Martin, 2009.  These lessons use an approach developed by the Stanford History Education Group. (See an intro to the model in this post on HSP’s Educators Blog.) They both consist of the following steps:

The central historical question for this lesson on anti-slavery thought is: What arguments did abolitionists make against slavery?

The lesson is best taught over a series of class sessions, though it can be expanded or shortened as necessary. The key variable will be the amount of time spent on reading and analyzing documents. Teachers may choose to offer students modified versions of the documents, linked below under “Other Materials.”

[In the final product, this video would open onto a new page.] 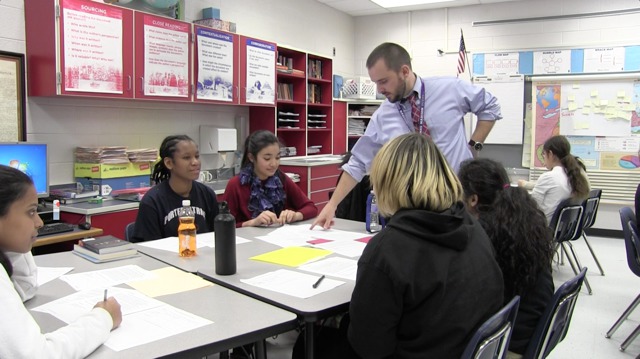 Document-Based Lessons are a product of a grant from XXXX received by the University of Pennsylvania Graduate School of Education and have been produced in partnership with the Historical Society of Pennsylvania.

How has social disagreement and collaboration been beneficial to American society?

To prepare students to answer the historical question you will pose to them, build the background understanding they will need. To get the most out of this lesson, students will benefit from having previously studied colonial American history, the American Revolution, and the era of Manifest Destiny.

One way to help students work productively with documents is to provide them with a timeline such as the one linked under Other Materials, to be used while reading and discussing documents. This timeline should serve as a reminder of the chronology of events, rather than a first-time introduction to the events listed.

Another way to help students synthesize understanding from previous study is to review major events with a slideshow or film.

The heart of this lesson is its historical question: What arguments did abolitionists make against slavery? Pose this question to students and explain that they are going to read primary sources in order to better understand the ways in which abolitionists challenged the institution of slavery. Teachers can also ask students to attempt to answer the question before they read the documents, as a kind of pre-test or initial assessment.

The first introduction to the primary sources is an interactive exercise that encourages students to think about the documents as artifacts of their time.  What is the document?  How is it made?  What does its form and condition tell us about how it has been used over time?  Are there any features that are particularly puzzling or interesting? What questions bubble up about the content?

[This title will link to the activity, which may consist of an annotated document, a video, or other form of technological interface between the student and document.  While the Source-Explore documents would be one from this lesson, this example is not; it is offered to show a version of how a docent is replicated online to show its original form and the qualities of the paper.]

While reading the sources, students may benefit from guided questions such as the following (from the Stanford History Education Group) to help them with sourcing, contextualization, and close reading.

To complete this lesson, students must answer the central historical question by making a historical claim and supporting that claim with evidence from the documents. Teachers can ask students to do this in discussion or in writing (or both).

In general, readers of the documents used in this lesson will find that they provide the following answers to the central historical question:

A discussion of these various arguments against slavery should lead students to consider how each one might have been received and how each one differed depending on its author, intended audience, and context. For example, students might discuss the religious appeal to a Christian principle made by a Quaker society in 1688 and contrast that with the appeal to a newly emerging American ideal of liberty made by a British writer in 1776 calling slavery in America hypocritical. They might then analyze the 1843 argument that slavery damages society by inhibiting moral growth and population growth, considering concerns over growth in the age of Manifest Destiny. Students will be interested to note that these anti-slavery documents do not always argue against slavery on the basis of racial equality as we would construe it today -- indeed, the 1843 essay describes enslaved people as a “degraded race,” even as its author acknowledges that his negative characterization of African American slaves is caused by slavery itself.

In addition to noting differences between the documents, students might also trace the development of themes over two or three of the sources, including appeals to Christian principles and appeals to American ideals of liberty.