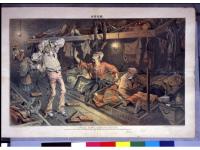 This cross-curricular lesson plan explores anti-immigrant sentiment and stereotyping during the 19th century. Using the Irish as a case study, students learn about the reasons nativism has emerged in American life, and how they can apply the lessons of history to critically understand and contextualize attitudes toward immigrants today.

This lesson presents students cartoons depicting stereotypes of Irish immigrants in the late 19th century. Students will interpret the meanings of these cartoons and analyze how they both reflected and shaped the general population’s view of Irish immigrants. Then students will examine the case of the 1844 anti-Irish riots in Philadelphia.  Drawing on a variety of sources and first-person accounts of the incident, students will discuss point of view in historical narrative and generate their own narrative accounts of the riots.

How does continuity and change within Pennsylvania history influence your community today?
How has social disagreement and collaboration been beneficial to Pennsylvania society?

• Understand the factors that led to anti-immigrant sentiment and nativist activities in the 19th century through the use of both primary and secondary sources.

• Formulate conclusions as to how and why nativist ideologies grew in Pennsylvania in the early 19th century by analyzing primary sources.

• Synthesize what they learned by presenting  a comprehensive work displaying their understanding of the 1844 riots in Pennsylvania.

The Olive Branch; or, an Earnest Appeal in Behalf of Religion, the Supremacy of Law, and Social Order: with documents Relating to the Late Disturbances in Philadelphia
The Republic: A Magazine for the Defense of Civil and Religious Liberty no. 1: The Kensington Massacre, Philadelphia
Catholic Herald, July 18, 1844
Reflections on the Late Riots by Candid Writers in Poetry and Prose
Uncle Sam's Lodging House
The Pope's Dream, A Roman Catholic America

1. Begin with a short lecture about nativism. Explain that the attitudes expressed in the texts represent the attitudes of some mainstream Americans in the 1840s, such as Samuel Morse.  Some Americans reacted to Irish and/or Catholic immigrants negatively, and these attitudes increased throughout the early 19th century. Discuss how these issues relate to some of the conditions of the period and emphasize that those conditions made people uncomfortable with the Irish’s ethnic and religious difference.

2.Examine the two cartoons with the class. Explain to students that these images were circulated in the popular press (magazines and newspapers) during the late 1800s.Have students carefully examine the images about the Irish. Ask what messages the images are sending and how they may have influenced people who saw them.

3.  When the discussion about the cartoons has finished, mention that though these cartoons were from the 1880s, these attitudes were present earlier in the century as well. Introduce the topic of the riots. Hand out the materials packet (including primary source documents) so that the class has a general idea of how the riots began. Students will examine the primary accounts of the 1844 riots in Philadelphia to understand the chain of events.  Using the worksheet, have students analyze an account individually or in small groups. Discuss each account and situate it within the time.  Who is the writer (Protestant, Catholic, Irish, etc.)?  How does he/she feel about the Irish (negative, sympathetic)? What values seem important to him/her?

4. After students have finished analyzing the primary sources, divide them into small groups to role-play as the staff of the Philadelphia Daily Ledger, a fictional 19th-century newspaper, charged with reporting on the Philadelphia riots of 1844. Task each group with producing an issue of the paper for late July 1844. Each group represents a newspaper staff group and each member accepts a staff position with the following assignments:

• Staff reporter(s): write a blow-by-blow account of the riots, including a description of what happened, mock interviews with major players (rioters, police/militia, Irish parishioners)
• Editor: write an op-ed piece condemning or supporting the violence, with reasons why he/she offers this position.
• Photographer/Illustrator: create images of the riots and their aftermath and/or use image handout and couple these images with the appropriate articles. Develop appropriate captions.
• Citizen letter to the editor: write a letter from an outraged citizen supporting or condemning the paper’s editorial stance and offering an alternative view. Multiple letters might be submitted in order to capture the perspective of a Native American Party member, an Irish Catholic immigrant, or a police/military volunteer.

After the students select their role, they should discuss the details of the newspaper’s layout. What will be the column size, font, etc.? After students have written a rough draft and peer edited their work, they should type their final drafts according to the standards they agreed upon and assemble the paper in class.

5. When students have finished their newspapers, have students share them across each group and compare them.  Discuss with the class how the editorials and accounts reflect the attitudes of the day. Ask students to evaluate their peers’ work and write down how well each group captured the feelings and attitudes of the past.

American Republican Party: A political nativist group that began in 1843 and is not connected to the current Republican Party. In 1845 they called a national convention, changed their name to the Native American Party, and pushed for legislation that would create a twenty one year period prior to naturalization.

George Cadwalader: Brigadier General for the Pennsylvania Militia and was summoned to quell the anti-Catholic riots. In addition to his time in the militia he also served in the Mexican-American War and the Civil War.

Nativism: the policy of protecting the interests of native-born or established inhabitants against those of immigrants.

This unit was created by Eden Heller, Haverford Hurford Center for Arts and Humanities summer intern for the fall 2014 issue of Pennsylvania Legacies.  She based her unit upon two others:  Irish Immigration by Kathryn Wilson and Jennifer Coval and Exploring Nativism in Pennsylvania by Kathryn Wilson.

Blog Post
Join us to learn about Irish-Americans Immigrant History