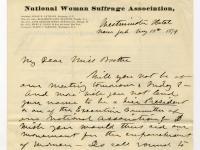 This WebQuest is focused on 12th grade historical research. The WebQuest may be used simultaneously with an unit on the women’s suffrage Movement. Students will use their textbook, online historical resources and in-class assignments on the women’s suffrage movement. Prior to students conducting internet research, they should be provided background knowledge of different topics and events during the women’s suffrage movement. In addition to classroom instruction, this WebQuest is an active learning activity that allows students to take part in the lessons and helps them develop an individual perspective on the women’s suffrage movement, as well as gain an understanding of how the movement is relevant to their lives. The WebQuest activity involves students to take on the roles of historians and newspaper journalists. Their newspaper is to be an accurate historical account that illustrates individual perspectives on the movement and its outcomes. The newspaper aims to influence the American public and government to support the passage of an equal voting rights bill.

At the beginning of the Women’s suffrage unit, students should be provided with the WebQuest assignment. The handout will include the description, instructions, library research trail, and the evaluation rubric. Students will create their own women’s suffrage digital or in-class portfolio. The purpose of the portfolio is to help the students organize all their notes and internet sources gathered throughout the Women’s suffrage unit. All of the information will be used to develop and complete their WebQuest research project. There are six step to follow in order for the students to achieve a greater understanding of the women’s suffrage movement:

Students will be able to:
• Conduct a web search on a topic, analyzing sources for bias and appropriateness.
• Describe the various perspectives  of suffragists, knowing that the group  was not monolithic in its background, desires, or goals.
• Write a newspaper article and editorial.
• Understand how a social movement has the power to change laws, policies, and secure human rights

Explain the concept of the WebQuest and the subject of women’s suffrage using the PowerPoint Slides.

Ask your learners to act like reporters covering the women’s suffrage movement. The task involves gathering facts and organizing them into an account within the usual genres of news and feature writing. In evaluating how they do, accuracy is important and creativity is not. A well-designed journalistic task will require your students to: maximize accuracy by using multiple accounts of an event; broaden their understanding by incorporating divergent opinions into their account; deepen their understanding by using background information sources; examine their own biases and minimize the impact on their writing.
Handouts:  Student Process

A. Assign each student to a group of four or five. Each group will be assigned to research a specific time period of the women’s suffrage movement and a specific suffrage publication. Time periods and relevant newspapers are:

B. Each student within each group will be assigned a journalist “job.”   Conduct a class discussion and explain each job.

D. Review the rubric so that students are clear on expectations.

Students conduct their research according to the Student Process Handout and write their newspaper article in accordance to their job title.

5) Introduce the Letter to the Editor

Explain the purpose of the editorial letter.

A. Once each of the students has written his or her article, it is time for them to write a persuasive piece about women’s suffrage.  Explain the purpose and idea of an editoria as well as review the Editorial Rubric so that students clearly understand their expectations.

B. Instruct students to get together with their group and conduct a meeting. Each student will present their article to their group. They will identify their topic, the background information and research findings, and hand each member a copy of their article.

C. Assign each student one of his or her teammate’s news article. The student will be responsible to write a response letter-to-editor.

After students have completed their task use the grading rubrics to evaluate their overall understanding of the women’s suffrage movement.

Through this WebQuest, students will have gained knowledge and understanding of the impact of the women’s suffrage movement locally and nationally. They will understand of how a social movement has the power to change laws, policies, and secure human rights, and they will have developed a perspective on the importance of voting rights. Furthermore, they became aware that since the passage of the 19th Amendment, women have still felt it necessary to strive for further equality in many areas. Students will realize that the history of the women’s suffrage movement greatly affected not only women, but also affected the rights of people of color, religion, gender, and the disabled. The movement influenced the development of the Civil Rights Act and the petition for an Equal Rights Amendment. Since the ERA was introduced in 1923, it has not passed legislation. This project will give students an opportunity to make meaningful connections to the past.

Abolitionist: an individual who worked to end and/or abolish slavery.

Acquired rights:  any rights existing under a civil government.

Amendment: an addition, official changes, corrections, or additions to the United States Constitution.

Anti-Slavery Movement: Social movement to end slavery, also referred to as abolition reform movement. Susan B. Anthony and her family were strong abolitionists

Bill of Rights: The first 10 amendments to the U.S Constitution, which were adopted as a single unit on December 15, 1791, and which constitute guarantees of individual rights and of limitations on federal and state governments.

Citizen:  a native or naturalized person who owes allegiance to a government and is entitled to protection from it. Individuals have certain rights, duties, and responsibilities that are denied or only partially extended to aliens and other non-citizens residing in a country.

Citizenship:  the relationship between an individual and a state in which an individual owes allegiance to that state and in turn is entitled to its protection.

Civil liberties: freedoms that are secured by placing restraints on government

Constrain: to hold back or restrict, limiting someone; also constrain someone by putting up obstacles, such as unfair laws and rules.

Disenfranchisement:  to deprive of a franchise or legal right, privilege or immunity; especially : to deprive of the right to vote.

Enfranchise: To give the rights of citizenship to a person or group of people, especially to give that group the right to vote.

Entitle: to give the right to. for example, perfect attendance entitles you to free ice cream at lunch.

Equal Rights Amendment:  unratified amendment to the U.S. Constitution proposed by Alice Paul that was designed mainly to invalidate many state and federal laws that discriminate against women.  Its central underlying principle was that sex should not determine the legal rights of men or women. The text of the proposed amendment stated that “Equality of rights under the law shall not be denied or abridged by the United States or by any State on account of sex.”

Feminism: belief in the social, economic, and political equality of the sexes..

Franchise: special privilege granted to an individual or group; especially the right to vote

Fraudulently: dishonest action or seen as a criminal action

Impel: to force to move forward, urge a person to an action

Inalienable (rights): something that can’t be given or taken away by a government or another legal power.

Lobby: an act to convince law makers to pass laws in your favor.

Monopolize: a state or company has an unfair amount of control over a particular service or product, hurting other members of society and giving people fewer choices.

Oppress: when someone misuses authority or power to oppress groups, individuals, or society, by limiting their rights.

Petition: (1) an appeal, especially to a person or group in authority. (2) A written
document formally requesting a right or benefit from an authority or government.

Picket: a person or group of people standing outside a building to protest.

Primary source: a document that was created by the witnesses of an events at about the time it occurred; may be a diary, letter, report, photograph, financial record, memo, or newspaper article

Ratified or Ratification: to make something valid by formally ratifying or confirming it; "the ratification of the law."

Reformer: a person promoting or making changes in something (typically a social, political, or economic institution or practice) in order to improve it.

Rights: entitlements  to perform (or not) certain actions,.

Right to vote:  a legal right guaranteed by the 15th amendment to the US Constitution; guaranteed to women by the 19th amendment; "American women got the vote in 1920."

Secondary source: information that was created later by someone who did not experience first-hand or participate in the events or conditions you’re researching. For the purposes of a historical research project, secondary sources are generally scholarly books and articles, also included would be reference sources like encyclopedias.
Sentiment:  a thought, opinion, or attitude expressed in words. For example, The Declaration of Sentiments.

Suffrage: the rights of voting.

Unratified amendments: amendments proposed by Congress, but not yet approved by three-fourths of the states.

Usurpation: to take someone's power or property by force

Vote: an expression of opinion or will in response to a proposed decision; especially, one given as an indication of approval or disapproval of a proposal, motion, or candidate for office.

15th Amendment: Suffrage for African-Americans (1870). This amendment replaced section 2 of the 14th Amendment in guaranteeing blacks the right to vote, and also granted Congress the power to enforce this amendment.

19th Amendment: Woman’s Suffrage (1920). This amendment extended the right to vote to all qualified women in federal and state election

3-4 class periods, with research time outside of class

This WebQuest was conceived and created by HSP intern Lisa Costello as part of her class requirements at the University of Rutgers-Camden.