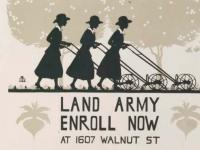 This lesson will focus on primary sources from World War I, including propaganda from the National War Garden Commission, political cartoons, and Charles Pack’s book The War Garden Victorious. This lesson will expose students to popular culture and multiple perspectives during World War I. It also seeks to help students understand how important propaganda was in creating a national purpose so that all citizens felt that they were a part of the war effort. By understanding the message of the propaganda and the main ideas in Charles Pack’s book, students will have the opportunity to analyze opinions and recognize historical bias.

What role do multiple causations play in describing a historic event?
What role does analysis have in historical construction?

Women's Division, US Food Administration for the Commonwealth of Pennsylvania
The War Gardener's Ultimate Objective
Sugar, Save It
Sugar Means Ships
Save Food, Don't Waste It
"National League for Womans Service"
Land Army, Enroll Now
Don't Let Up, Keep on Saving Food
"Beat Germany" by Saving Food
Are You a Victory Canner?

1. Prior to this lesson, make sure that students have a brief overview of WWI. Please use the background knowledge ideas as needed to get students thinking about World War I and propaganda.

2. Next, print the vocabulary, and have students use the list as reference when reading and examining the documents later.

3. Begin by having the students read Chapters 1-3 of The War Garden Victorious by Charles Lathrop Pack. This can be assigned as homework prior to the lesson. As they read, make sure they use the vocabulary list when they come across something that might confuse them.

a. The War Garden Victorious, a primary source found online, not only provides relevant background information on the topic, it also allows for the opportunity to critically analyze primary texts and is written by Charles Lathrop Pack who began the War Garden Commission.

b. If needed, read the passages a chapter at a time so that each section can be discussed as a class. After reading, examine the author’s point of view and main idea of each chapter. Discuss how his viewpoint could lead to a historical bias in his writing. Discuss what it means to be subjective and objective in observations and in writing.

c. Drawing in prior knowledge of WWI, this reading will help students place the role of the war garden movement in historical context.

4. Introduce/Revisit the ideas of satire and propaganda

a. Propaganda: Information, especially of a biased nature, used to promote or publicize a particular political cause or point of view.

b. Satire:  The use of humor, irony, exaggeration, or ridicule to expose and criticize people’s stupidity or vices, particularly in the context of contemporary politics and other topical issues.

c. If needed also go over words such as biased and vice.

5. With the entire class, display the political cartoon “The War Gardener’s Ultimate Objective” on the board/projector and distribute copies of the Organizer for Analyzing Propaganda.

a. What do you see physically? How would you describe this to somebody who could not see it.

a. A man holding a shovel and thinking about a grave. The grave says Wilhelm II. There is a black bird in the corner on a wire.

a. How does this make you feel?  How does the character in the image appear emotionally?

a. The man appears happy to have buried something. He is digging a grave. The grave says Wilhelm II so he must not like him since he seems happy and is dancing on the grave.

a. Who is Wilhelm II? Who were our enemies and allies in WWI? What was the point of a War Garden?

a. Wilhelm was the Emperor of Germany during WWI so we must be happy he is gone. The point of the War Garden was to increase food to our allies during wartime which would hurt Germany since we were not providing to them.

1. Questions: Now that we have all this information what does this cartoon MEAN?

a. Possible Answers: The War Gardens are helping to defeat Germany.

b. Allow students to critically observe the advertisement “Are you a Victory Canner?” individually for 3-5 minutes focusing on the objective and subjective observation portion of the analysis.

c. Allow students another 3-5 minutes to discuss the objective and subjective observation with a partner

d. With the entire class, orally ask students “What prior knowledge do you have about                 anything you see in the advertisement that can help us better understand this image?”                 Allow time for student responses orally.

f. Have students individually write a summary of what they know about the image in the            deduction section.

5. Display several images of propaganda posters around the classroom from the war garden effort in WWI from The War Garden Victorious or from the listed primary sources propaganda posters.  Have students choose a cartoon and and fill out their organizer individually.

6. Have students write a comparative analysis of the ideas being portrayed in the political cartoon “The War Gardener’s Ultimate Objective” and one war garden propaganda poster of their choice.  Ask  students to note similarities and differences and any biases that may be present in the imagery.  Their analysis must be backed up by accurate information drawn from The War Garden Victorious and their prior knowledge of WWI.

Germany’s “Iron Cross”: A military decoration that existed in the Kingdom of Prussia andPropaganda: Information, especially of a biased or misleading nature, used to promote or publicize a particular political cause or point of view.

Satire:  The use of humor, irony, exaggeration, or ridicule to expose and criticize people’s stupidity or vices, particularly in the context of contemporary politics and other topical issues.

Political cartoons: Illustrations or comic strips containing a political or social message that usually related to current events or personalities.  Cartoonists use specific devises to get their message across

Wilhelm II: Emperor of Germany and King of Prussia (1888-1918).  Grandson of Queen Victoria, he supported the Afrikaners in South Africa and Austria’s demands on Serbia (1914).  He was forced to abdicate at the end of WWI.

Charles Lathrop Pack: Savvy investor in southern timber, banking and real estate in the late 1800s and early 1900s.  Organized the US National War Garden Commission and laun later in the German Empire and the Third Reich.  Established by Friedrich Wilhelm III of Prussia.  Symbol of the German Army (1871-1918).

Vocabulary from Chapters 1-3 of The War Garden Victorious:

Embattled: (For a place or people) involved in or prepared for war, especially because surrounded by enemy forces OR divided or edged by a line of square notches like battlements in outline.

Unfailingly: Without error or fault; reliable.

Dardanelles: A narrow strait in northwestern Turkey connecting the Aegean Sea to the Sea of Marmara.

Bushel: A measure of capacity equal to 64 US pints (equivalent to 35.2 liters), used for dry goods.

Per capita: For each person; in relation to people taken individually; per unit of population (from statistics).

Prophecy: A prediction; the faculty, function, or practice of prophesying.

Endeavor: An attempt to achieve a goal.

Allotment: The amount of something allocated to a particular person.

Incomprehensible: Not able to be understood; not intelligible.

Wholesaler: Individuals responsible for the sale and distribution of goods to users other than end consumers such as retailers, merchants, etc.

Concurrent: Existing, happening, or done at the same time.

Technicality: A point of law or a small detail of a set of rules.

Conspicuous: Standing out so as to be clearly visible; attracting notice or attention.

Inquirers: People who seeks information by questioning; those who investigate.

Salutations: A gesture or utterance made as a greeting or acknowledgement of another’s arrival or departure.

Sanguine: Optimistic or positive, especially in an apparently bad or difficult situation.

Commensurate: Coorresponding in size or degree; in proportion.

Horticulture: The art of practice of garden cultivation and management.

Eminently: To a notable degree.

Engendered:  To have caused or given rise to (a feeling, situation, or condition).