Introduction to Propaganda in WWI

Introduction to Propaganda in WWI 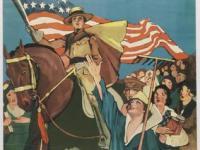 In this lesson, students will be introduced to propaganda produced during World War I. Propaganda greatly influenced the home front as well as soldiers’ morale, ranging from recruitment and enlistment ads, to posters asking for wartime loans, to images promoting morale at home. Propaganda influenced the economy during and after WWI, enlistment numbers, recruitment of women’s aid and service organizations, and helped to power the America’s role in the war. This lesson will define propaganda by using primary sources from WWI, outline the influence of propaganda on WWI, and allow students to engage with the primary sources as well as examples of contemporary propaganda through new knowledge.

How does continuity and change within the United States history influence your community today?
What does it mean to be a United States citizen, and what is your role in the history of the world?
What role does analysis have in historical construction?

Name calling/stereotyping: When you invent a name to call someone to help dismiss their credibility.

Testimonial: Personal statement given by a credible person, advocating for the subject of the propaganda regardless of merit or fact.

Transfer or Association: Similar to Testimonial, but reliant on the credibility of an institution rather than an individual.

Bandwagon: Soliciting or advertising based on the desire to be a part of something or to have something in common with the majority (“Everyone’s doing it!” Or, “All the smart people are doing it!”).

Plain Folks: The argument that the “common man” or everyday, wholesome person understands, agrees with, or uses the advertized concept or product.

Professional/”Just a jacket”: Using physical appearance to create the perception of credibility.

Implicit: Implied rather than expressly stated.

Land Army: A civilian organization that allowed women to work in agriculture to replace the men who are overseas at war.

Bigotry: Stubborn and complete intolerance of any creed, belief, or opinion that differs from one's own.

Primary Source: Pertaining to or being a firsthand account, original data, etc., or based on direct knowledge.

Secondary Source: Pertaining to or being a derived or derivative account, an evaluation of original data, etc.; not primary or original.